Taking a quick break from her busy workday, Elizabeth Howell clicked on the video from the dog rescue page she followed. Ever since third grade, when her family adopted an adorable mutt, Elizabeth had adored dogs. Even after marrying and becoming a mom, the Phoenix, Arizona IT executive continued adopting rescues.

So now, watching the video about a young golden retriever who had been stuffed inside a trash bag and left in a dumpster halfway around the world in South Korea, Elizabeth’s heart shattered. Who could do such a horrific thing to that sweet creature? She cried when she learned the pup’s legs had been bound with wire, causing such a severe infection that veterinarians in Seoul had to amputate portions of all four.

Yet Elizabeth noticed that Chi Chi — which means “loving” in Korean — was wagging her tail and looking up at the person who was filming, her wide, dark eyes filled with hope. After everything she’s endured, she still hasn’t given up on love! Elizabeth realized.

And, wiping away tears, she called her husband, Richard. “You need to see this!”

Richard knew what that meant: Elizabeth wanted to adopt a dog. Although they’d lost their last golden to cancer a few years earlier, they still had three pups: a black Lab mix named Maggie; and Kipper and Harry, a pair of beagles.

“I thought you said we weren’t adopting any more,” he said. But Elizabeth couldn’t get Chi Chi out of her mind — and after doing research, she discovered it was possible to get prostheses to help the dog walk.

In the meantime, though, if they adopted Chi Chi, they would have to carry her. “I’ll help!” Elizabeth’s daughter, Megan, promised. And the more Richard considered it, he agreed: Certain dogs are just meant to be in your life.

They contacted the L.A.-based organization where Chi Chi had been brought from South Korea, knowing she had a better chance of being adopted in America.

But while Elizabeth, Richard and Megan were excited to meet Chi Chi, the pup was so exhausted and nervous her first night at home, she whimpered until the sun rose.

“It’s okay,” Richard cooed, sleeping beside her. And in the weeks that followed — as they learned how to wrap Chi Chi’s legs in cotton gauze to protect her still-healing wounds — Elizabeth took off work to hold Chi Chi in her lap like a baby and take her to doggie rehab, where she relearned to use her legs, paddling through the pool. Thank you for taking such good care of me, Mama! Chi Chi seemed to say, peppering Elizabeth’s face with kisses. 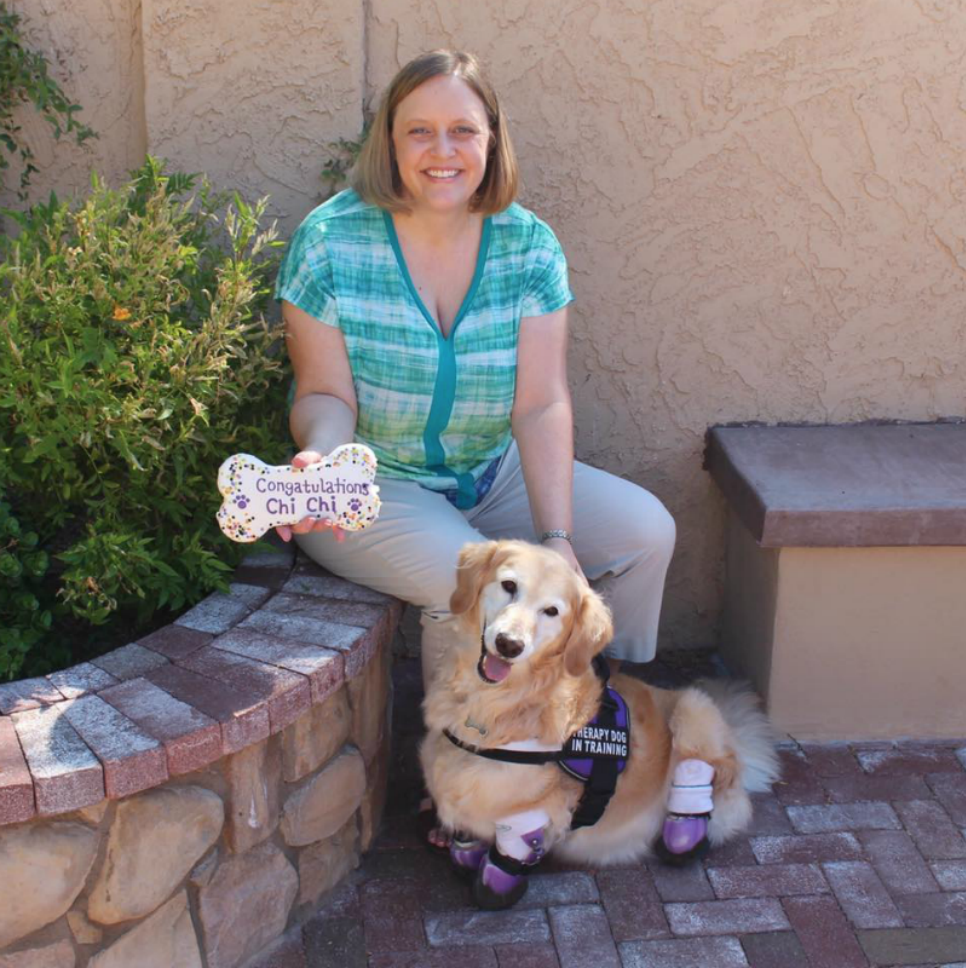 They never minded holding Chi Chi when they brought her outside to watch her furry siblings play fetch. Still, Elizabeth wished that Chi Chi could have a more normal life, going for long walks and exploring the way dogs are supposed to.

A friend who made human prostheses created makeshift ones for Chi Chi from foam. “Look at her!” they beamed as Chi Chi made her way through the yard. But those prostheses only gave the pup a small amount of mobility, and they often caused sores.

So Elizabeth kept contacting pet prosthetic companies. And though Chi Chi’s case was unusual and difficult — “She needs all four? All different lengths?” one lab asked — finally, after fundraising and tons of paperwork, Chi Chi got her new legs.

The moment they attached the purple prostheses with the black, paw-like bottoms, Chi Chi stood up as if to say: I have my legs back! And soon, she had not only mastered the stairs but was chasing Maggie and the boys through the house.

It wasn’t just that Chi Chi could move better, either. When they went for walks, she’d trot proudly — smiling at passersby like: Check me out! “She’s been completely transformed,” Elizabeth marveled. And it struck her: Everyone struggles. Maybe if people see Chi Chi, they’ll realize everyone can triumph over adversity. Maybe it’ll inspire them to be kinder to those with challenges, too.

So Elizabeth started a Facebook page as well as an Instagram account posting pictures and stories about Chi Chi—and soon, she had thousands of fans! “What a pretty, brave girl!” people posted. People with physical disabilities. People battling serious illnesses. Even folks just dealing with daily stress. “I have severe pain, so before I get out of bed, I check Facebook to see how Chi Chi’s doing — and she gives me motivation!” one woman messaged.

After 10-year-old Owen Mahar had to have both legs amputated due to burns he’d sustained in an accident as a toddler, the Pittsboro, Indiana, fourth-grader’s teacher suggested he watch Chi Chi videos for inspiration.

“If she can walk on four prosthetic legs, I can walk on two,” Owen decided. And he dreamed aloud to his mom, Susan, “I wish I could give Chi Chi a hug.” So, contacting Elizabeth, they planned a visit. And as Owen — wearing one Chicago Cubs prosthesis, and one Indianapolis Colts — snuggled with Chi Chi, both moms’ eyes welled with tears. 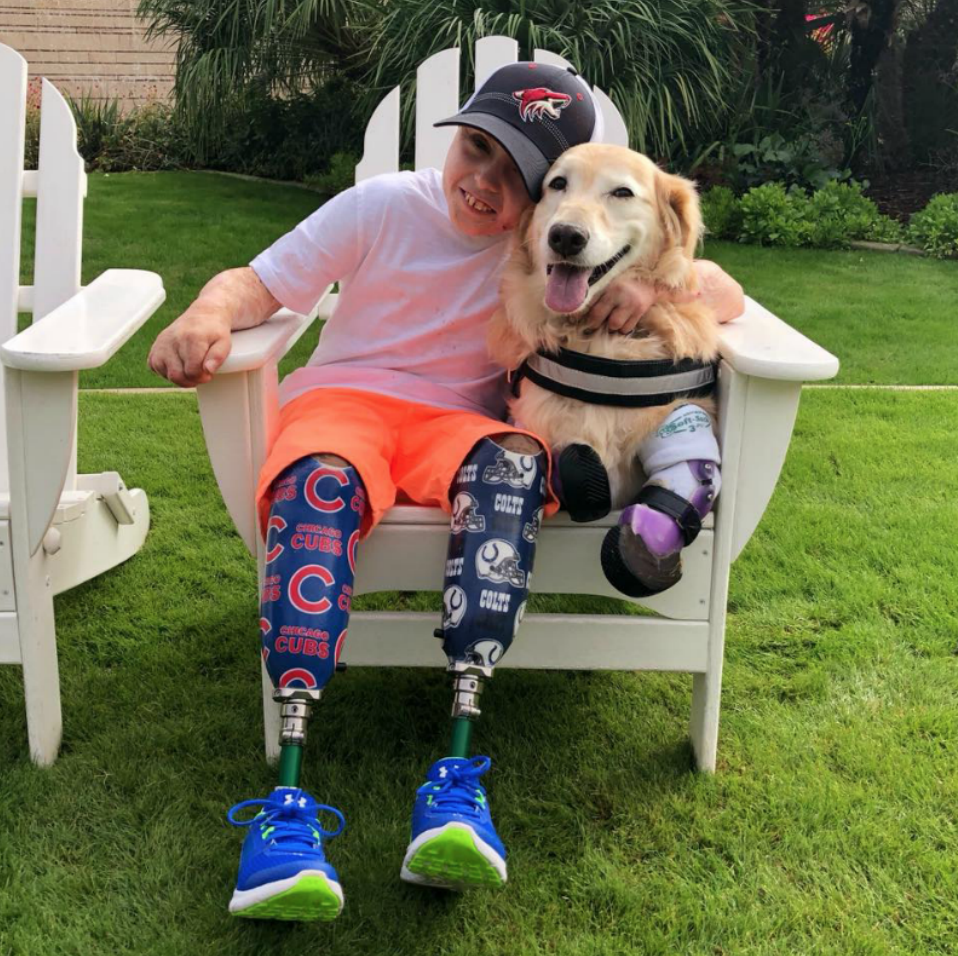 “Seeing how Chi Chi is accepted reminds Owen there’s a lot of good in this world,” Susan smiles.

Today, Chi Chi is also a certified therapy dog who visits veterans’ hospitals, rehabilitation centers and classrooms for children with autism. Surprisingly, nobody talks much about her prosthetic legs; they simply notice her “special shoes,” hot pink leash and purple sweaters, and how she grins with joy when they stroke her soft, golden fur.

“Dogs love unconditionally and reach a person in ways humans can’t. Chi Chi certainly has that gift. She’s a reminder that, with compassion and love, every life matters and can make a difference,” Elizabeth beams. “She’s truly a special girl who’s changed many lives — including mine!”

This article was written by Kristin Higson-Hughes and originally appeared in our print magazine.