Meet Rhett, a cute puppy who gets carried around in a baby sling with a fleece blanket tucked inside for extra warmth and comfort. Why, you ask? Well, first of all, why not? But the other, more important reason: Rhett hates to be alone.

When Rhett was born, he had two pup brothers named Owen and Junior to keep him company. Sadly, Rhett’s brothers became so sick that Owen passed away and Junior was put in intensive care, leaving Rhett all alone. During this time, Rhett was just two-months-old and extremely anxious without his big brothers around to keep him company. To make little Rhett feel better, his foster mom, Mariann Wright-Feliciano, decided to start carrying him around in a baby sling. 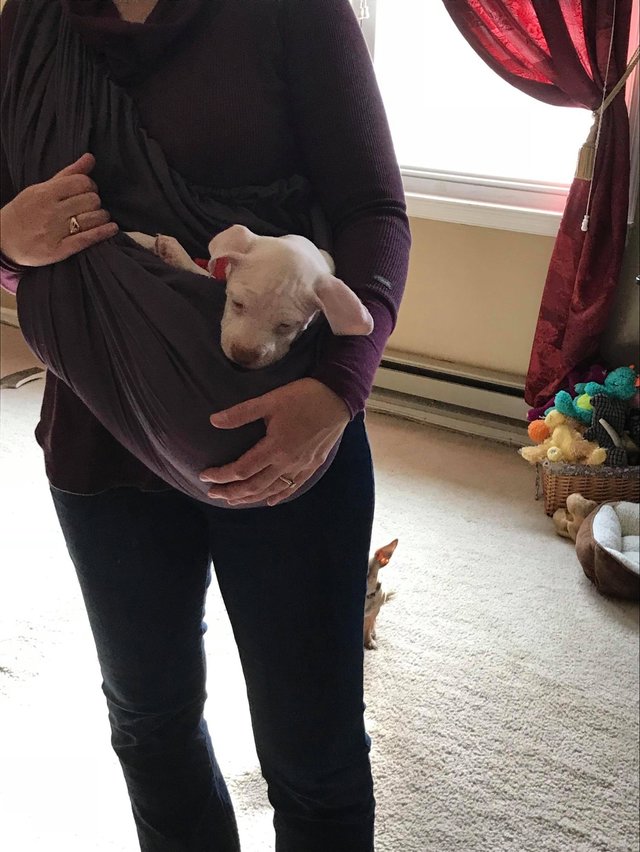 Rhett and his brothers were a part of a litter of six who ended up in a shelter in Arkansas with their maternal mother. The pups were then transferred to NovaStar before they were permanently housed in New Jersey’s Don’t Bully Us Rescue. Unfortunately, the family was separated into two foster residences. While the mother dog and the other puppies went elsewhere, Rhett, Owen, and Junior went to live with Wright-Feliciano, her husband, and their two sons. 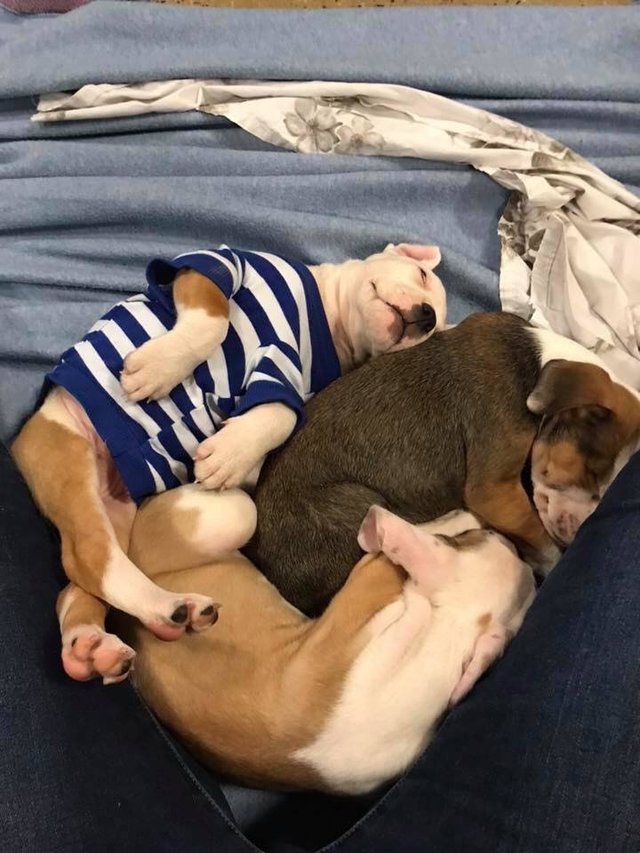 While the vet isn’t sure exactly what caused Rhett’s brothers to fall ill, Wright-Feliciano said it could have been a viral infection.

“Owen was taken to the vet, given blood tests, and antibiotics and fluids,” Wright-Feliciano said. “Blood work revealed no real answers, everything was negative. Only that something was attacking his white bold cells. Sadly after fighting for six days, Owen lost his fight. Then sadly, Junior started showing the same symptoms of being ill. Junior was taken to the vet for blood work as well, and to get fluids and medicine. Junior’s blood showed that something was attacking his white blood cells as well; only positive thing is his body was making new ones. So we had a fighting chance. We actually had three other puppies from different litters that came on transport with them that had the same thing. So that left Rhett all alone.”

At first, she tried to soothe his nerves with a brand-new doggy bed and some new fuzzy blankets. When that didn’t work, she gave him a soft stuffed camel to snuggle with. But nothing seemed to heal his loneliness. 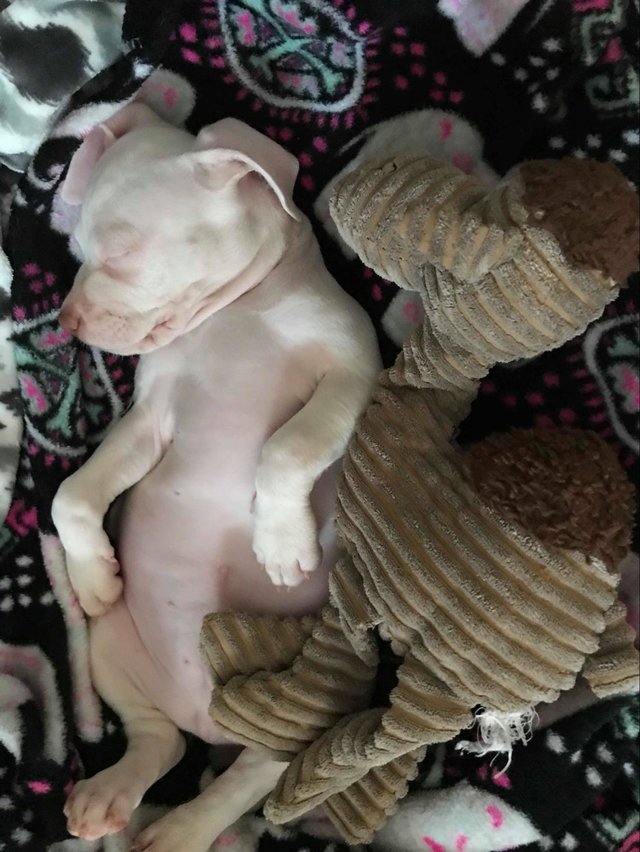 After trying just about everything, she decided what Rhett really needed was love. So she swaddled him up and laid him in a baby sling.

“He would cry and howl if he could not see someone at all times, or if he was not being held, so that’s how Rhett ended up in the sling,” Wright-Feliciano said. “Holding him not only comforted him, but [it] also [comforted] me. Keeping him close was my way of watching him carefully to make sure he didn’t get sick. My heart couldn’t take another loss. He only spends 10 minutes or so at a time [in the sling]. The rest of the time he’s got the zoomies around the house, trying to steal someone’s shoe or anything he can walk away with.” 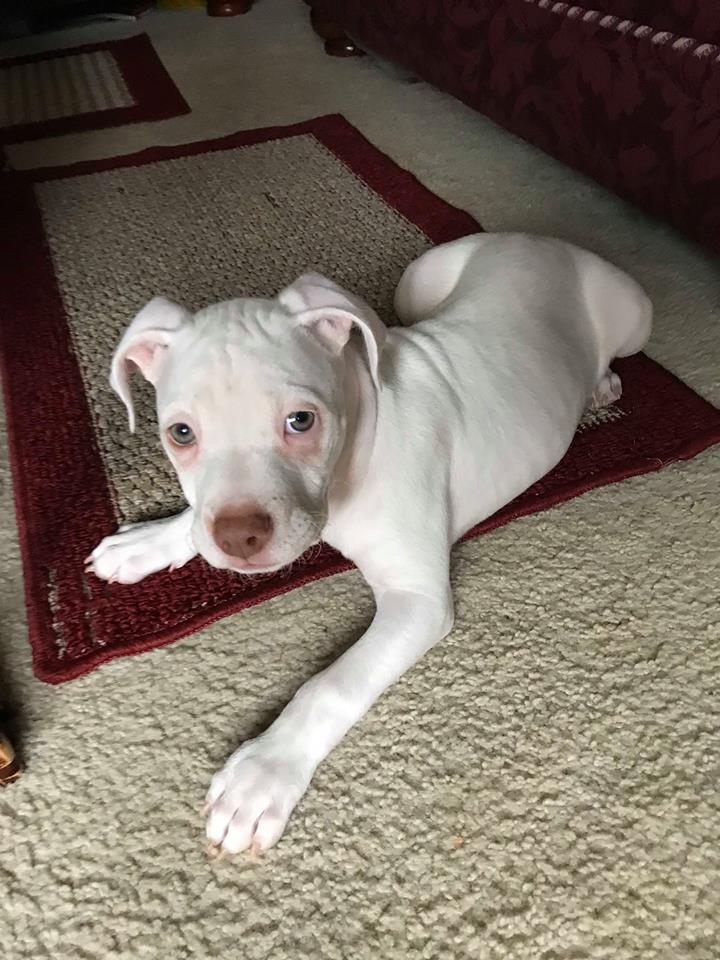 Although Rhett can’t stay in the sling forever, Wright-Feliciano said it’s helping him to get over his loneliness and the loss of his brothers so early in life. Once Wright-Feliciano feels that Rhett is ready, he’ll go up for adoption. But because Rhett needs more affection than most, Wright-Feliciano is asking adopters who already have a dog to think about adding Rhett to their family.

If you’re a dog mom who could use another pup in the house, you can reach out to Don’t Bully Us Rescue on Facebook.