After a nine-year wait, the Smithsonian’s National Zoo and Conservation Biology Institute welcomed a new baby gorilla, and he’s simply the sweetest thing you’ll see this week. Little Moke [pronounced Mo-KEY] was born to mom Calaya and dad Baraka, and his name means “junior” or “little one” in the Lingala language. Right now he’s spending all his time with Mom, and we can’t help but to feel a little jealous at how much time he gets to spend snoozing.

“The birth of this western lowland gorilla is very special and significant, not only to our zoo family but also to this critically endangered species as a whole,” Meredith Bastian, curator of primates, said. “The primate team’s goal was to set Calaya up for success as best we could, given that she is a first-time mother. Doing so required great patience and dedication on the part of my team, and I am very proud of them and Calaya.”

Back in November 2017, the zoo announced that Calaya was pregnant. They trained the 26-year-old mother to willingly participate in ultrasounds, so the zoo was able to track her progress throughout the pregnancy. Female western lowland gorillas typically won’t start breeding until they’re at least 10 years old, so Calaya could be considered an older mother. Usually, female gorillas are pregnant for 36 to 37 weeks — roughly the same length as a human pregnancy — but gorilla babies typically weigh just four or five pounds, which is much smaller than a normal human baby. 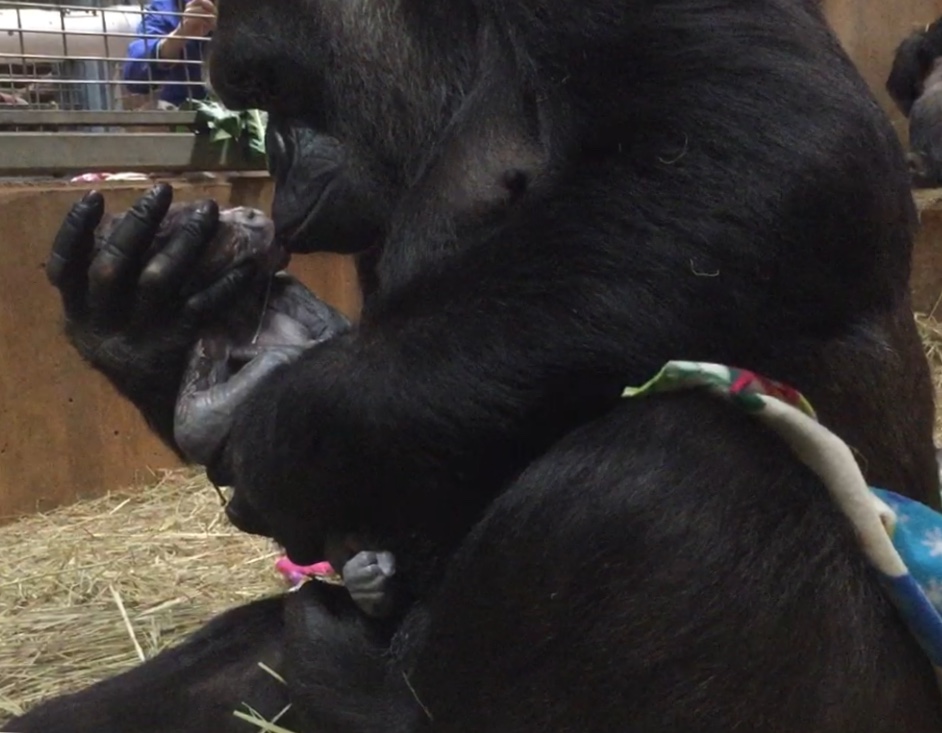 “This infant’s arrival triggers many emotions — joy, excitement, relief, and pride that all of our perseverance in preparing Calaya for motherhood has paid off,” animal keeper Melba Brown said. “We will provide support to her if need be, but I have every confidence that Calaya will be a great mom to Moke. I am excited to see how he will fit into the group dynamic. There are a lot of different personalities in this family troop, but they all work well together.”

Western lowland gorillas are considered critically endangered, and in the last two decades, poachers and disease have wiped out nearly 60 percent of the western lowland gorilla population. That certainly makes Moke’s birth an extra special event. For now, Moke will be attached to his mom — quite literally — for the next three to four months, and Calaya will continue to nurse him until he’s about three years old.