Meet Sting, a 10-year-old therapy dog who loves spending time with kids who hope to learn to read. Sadly, Sting felt one of the worst feelings a retired racetrack hound can feel — loneliness — when no one showed up to read with him during his “Paws to Read” shift at the White Bear Lake Library in Minnesota recently. Paws to Read is a reading program that aims to improve literacy by giving kids a safe and non-threatening place where they can practice reading loud to therapy animals.

As soon as Muellner’s post went live, hundreds of dog lovers flooded his Facebook page with supportive comments, and people from as far away as New Zealand, the Philippines, and South America shared the post.

“I talked to a 16-year-old who wanted to drive up from Florida,” Ann Wahlstrom, the librarian at White Bear Lake told TwinCities.com, adding that she’d just gotten off the phone with a Californian who also wanted to make sure the sweet pooch had someone read to him. 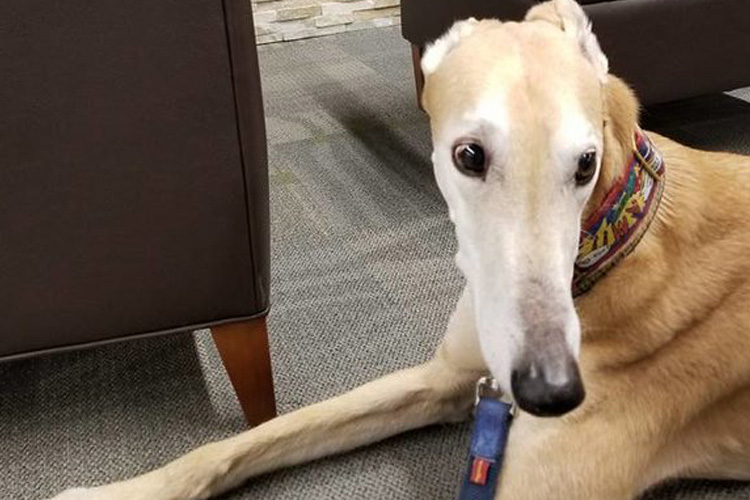 Sting immediately became an internet sensation and the photo of his lonely face ignited a brand-new interest in the Paws to Read program.

“It’s meant to be a treat for kids to get to come to the library and read to a dog,” Wahlstrom said. “And the dog is going to sit there and give them nothing but positive feedback. The program is meant to be a wonderful time for a child to work on literacy. And so many studies show that it increases reading fluency, it increases vocabulary and it increases kids’ desire to read — so it’s win-win for everybody.”

Thanks to Muellner’s post, Sting is now booked through April!

“It’s been insane,” Muellner told The Dodo, in reference to the post’s response.

Despite Sting’s long face, Muellner said he’s a very happy boy who is apparently very busy. In addition to helping kids learn to read, he brings his therapy to Gillette Children’s Hospital as well as a senior home in the area. In addition, Sting acts as an ambassador for prospective adoptive families for retired greyhound racers. A busy bee, indeed! If you want to keep up with Sting’s charitable antics, his dog dad created a Facebook page dedicated to Sting’s good deeds.

Next, watch the video below to see New York’s five-star dog hotel!