Fiona, an adorable baby hippo at the Cincinnati Zoo, has captured the hearts of countless adoring human fans. With her infectious, charming smile and her playful videos that quickly go viral, she is without a doubt one of the most famous little hippos in the world. We guess it was only a matter of time before she stole the heart of a fellow hippo.

On March 8, the San Antonio Zoo posted a love letter to Fiona on its Facebook page — on behalf of its adorable little boy hippo named Timothy. The post, addressed directly to Fiona, read: “My name is Timothy. I recently moved out of my mom’s house to San Antonio and currently live with my grandma, Uma who I love very much. My grandpa, Tumbo, was a cover model for National Geographic magazine. Grandma says that’s where I get my great looks.”

But wait — it gets even cuter. The post added: “Anyhoo, I have seen your pictures and videos on the internet at the Cincinnati Zoo & Botanical Garden and I think you are the most beautiful hippopotamus I have ever seen. Perhaps we can meet someday and be boyfriend and girlfriend? I am single and available.”

Who could say no to a face like this?

Fortunately, the lovestruck Timothy didn’t have to wait long for a response. The day after Timothy made his move, Cincinnati Zoo posted a response on its Facebook page — on behalf of the much beloved Fiona. The good news? The answer wasn’t no. The bad news? It looks like Timothy is going to have to put in a lot more work than one Facebook post to win her heart forever.

The post read: “Fiona thinks you’re cute too, but it’s what’s on the inside that really counts! Your DNA will ultimately decide if you are the one for our little diva. She’ll be with her mom for a while, so you have time to consider if you are willing to put up with her fame. Any potential mate would have to be thick skinned and okay with taking a back seat. Are you okay with paparazzi? Are you willing to move out of the way during photo shoots? Most importantly, are you willing to relocate to Cincinnati?” 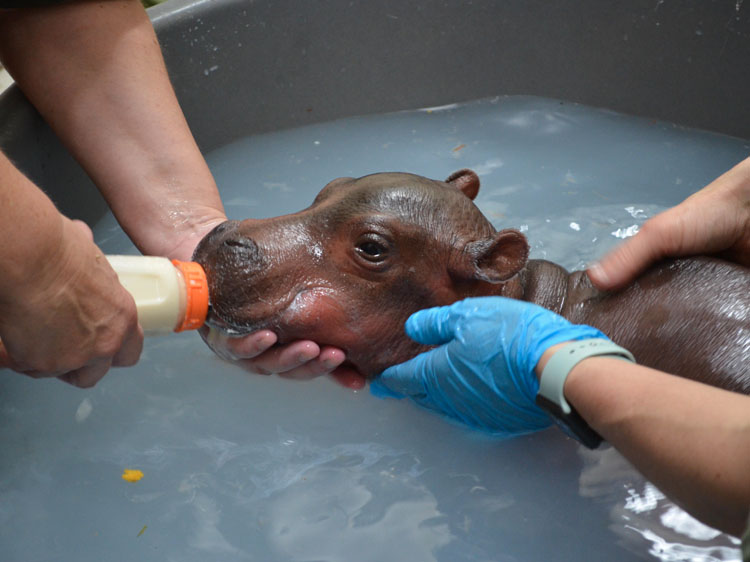 Next, learn some of the cutest names for baby animals of different species in the video below:

Fiona the Hippo Farting Is Too Adorable for Words