When a sweet doggie named Ghost was just three months old, Florida-based Swamp Haven Humane found him wandering the streets. But Ghost isn’t your average brown-eyed, white-furred pup; Ghost is also deaf. Sadly, he was deemed “unadoptable” because he was full of energy and seemed to have an indifference to people. His condition also made it difficult to find a forever family; poor Ghost needed to find someone who would love him for the dog he was, deaf or not.

What’s even sadder is Ghost was scheduled to be euthanized. Thankfully, Swamp Haven Humane thought Ghost deserved another chance at finding a forever home. The organization reached out to a variety of animal shelters, including Olympic Peninsula Humane Society, in Port Angeles, Washington, which offered to take him in. Unbeknownst to Ghost, Olympic Peninsula had a special secret up its sleeve — and her name was Barb Davenport, a dog trainer and K-9 Program Manager for the Washington State Department of Corrections.

Davenport has been in the adoption game ever since she was little. She even participated in American Kennel Club conformation and junior showmanship, in addition to 4-H dog programs. In 1975, Davenport joined the army to become a K-9 handler, according to the Washington State Department of Corrections. And by 1979, Davenport had done exactly that. She told KIRO7 that she feels the best part of her job is saving dogs who might not be able to find forever homes and working to help them become important members of their doggy communities. 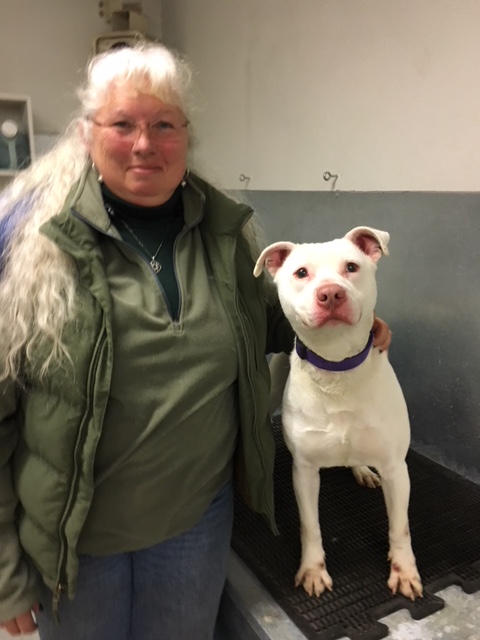 Despite Ghost’s condition, “he was very focused and determined to locate his ball when thrown or hidden,” Davenport said. She felt he’d be a perfect K-9 dog.

Now, Ghost is two-and-a-half years old and lives with a loving new owner, Joe Henderson. Like Davenport suggested, Ghost is a very good boy and is currently training as a narcotics detection dog for the Washington Department of Corrections, making him Washington’s very first deaf canine. How sweet!

Next, watch this brave pup kiss a lion right on the lips!:

When Senior Dog’s Favorite Toy Is Discontinued, Internet Comes to His Rescue