Some of the funniest moments on the set of Hot in Cleveland didn’t appear on camera. “The greatest part of my week would be if I could get Betty White to laugh,” remembered Jane Leeves, who played beautician Joy on the TV Land series. “I would turn around when the camera wasn’t on us and do something to make her laugh. Making Betty laugh would just make your heart melt.”

For six seasons, the women of Hot in Cleveland — Jane, Betty, Valerie Bertinelli, and Wendie Malick — explored stories about friendship, love, and finding happiness after 50. “We all share this mindset that life can become sweeter and richer as we get older if you keep a good sense of humor,” said Wendie, who played one of three Hollywood insiders who relocates to the heartland to reinvent themselves. Showing these transplants the ropes — and proving that you’re never too old to get the best line in the script — was Betty, playing the women’s heavy-drinking octogenarian landlady, Elka. 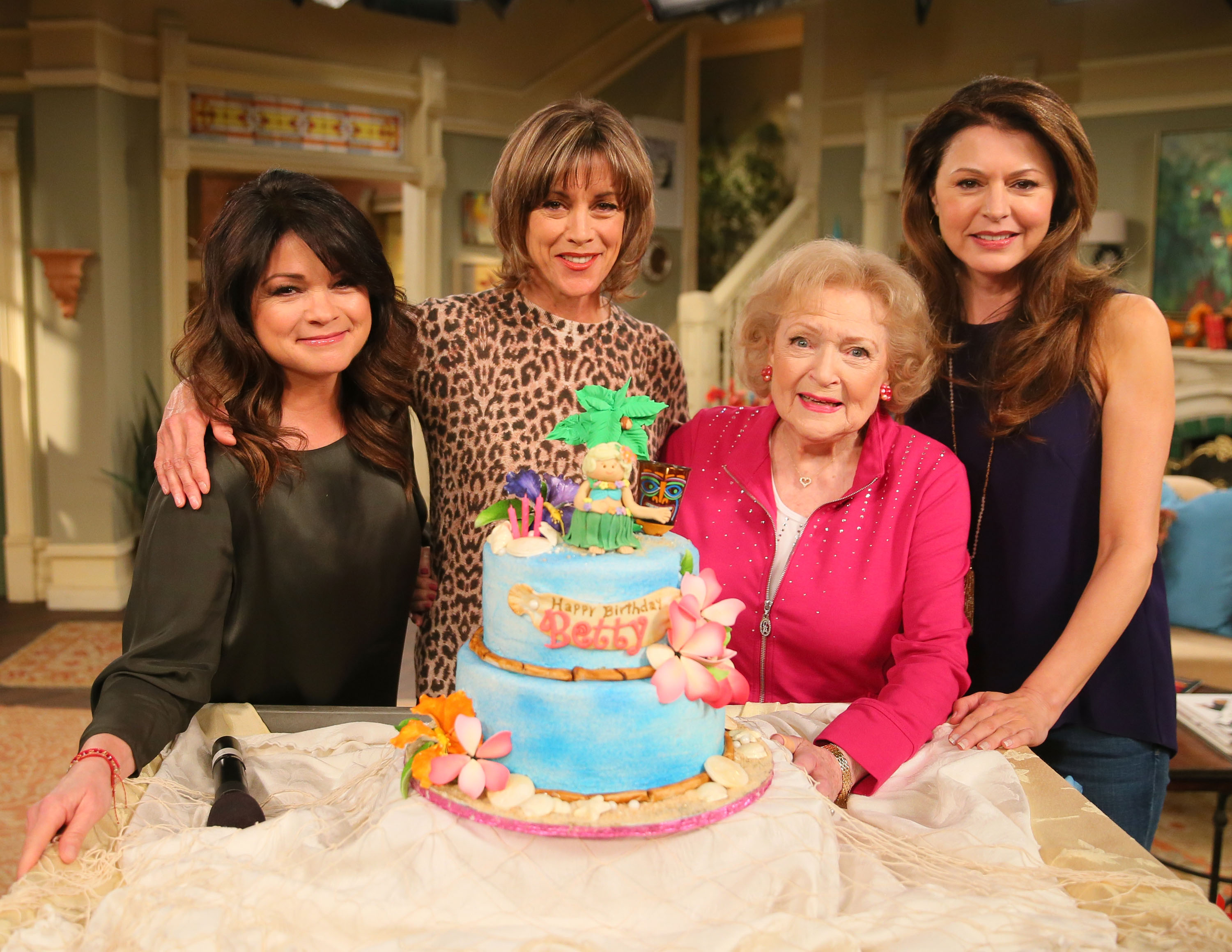 Blessed with an uncanny ability to say what everyone else is thinking, saucy Elka quickly became a fan favorite. That’s ironic because of the scripts. “Betty’s timing is impeccable,” said Wendie, who played retired soap star Victoria. “She’s an insanely brilliant comic actress.” Betty wasn’t intended to become a permanent part of the show. “I agreed to do a guest stint on a pilot,” recalled the actress, who didn’t want to commit to another TV series. “I said ‘yes’ provided it would be only a one-shot deal.” But the producers recognized the chemistry between Betty and her younger co-stars and begged her to become a regular. “Strong character that I am, I wound up doing [it],” she joked.

Pretty soon, Betty became the hub the other actors circled around. Before each week’s live taping, the women would assemble in her stuffed animal–filled dressing room to do the last read-through of the show. She proved to be an inspiration to her co-stars through more than 100 episodes. “Her positive attitude bled through the cast and crew,” said Jane. “She kept you from saying, ‘Oh I’m so tired.’ Instead, you’d go, ‘Oh, shut up, here’s this 90-year-old and she’s full of energy!’” Betty was 93 when the show ended in 2015.

That spunk and enthusiasm for the job never failed the workaholic star, even when she was ailing. “She did the show with cracked ribs and she would never even grimace,” revealed Valerie, who played romance-starved Melanie on Cleveland. “Betty doesn’t let anything ever get her down.” Of course, Betty would say that it’s just all about being grateful for your life and opportunities. “I’m blessed,” she insisted, admitting that being the eldest on the Cleveland set had its benefits. “They spoil[ed] me rotten,” she confided. “They’d bring me a chair whether I wanted one or not!” In the studio commissary, the other actresses would often be jealous of Betty’s typical lunch: a hot dog and french fries. “If I make it to 90, that’s what I’m having,” said Valerie.

In the Hot in Cleveland finale, Joy decides to name her new baby Elizabeth — but calls her “Betty” for short. It was meant as a tribute to the show’s most remarkable star. “When I thought of naming the baby that, I started to tear up. [It] just made sense,” said series creator Suzanne Martin. Added Wendie: “There is this incandescent light that beams out of Betty. She’s incredibly beautiful, not only on the outside but from within.”