The Duchess of Cambridge has stepped out for a surprise appearance less than a week after making her highly-anticipated return to public life since announcing she was pregnant with her third child.

Kate, 35, joined her husband, the Duke of Cambridge, and brother-in-law, Prince Harry, at Paddington Station, where they visited the cast and crew from the upcoming film Paddington 2. The royals were greeted by the film’s famous furry friend and appeared to get along swimmingly. In fact, the expectant mom —who continues to suffer from extreme morning sickness — even mustered up the energy for an impromptu dance with the beloved story book character.

The Duchess twirled, sidestepped, and bebopped in a blush pink dress by Orla Kiely. The knee-length look featured a black waist strap, which accentuated her growing baby bump, and was accented with a black clutch bag and block heels. She also showed off a slightly shorter hairstyle than we saw during her last public appearance for World Mental Health Day.

The event, which was hosted by film production company StudioCanal, also involved children from 30 different charities, which Kate, Harry, and William all dedicate their time to. Kate spoke with two young girls who are helped by children’s mental health charity Place2Be, and revealed her favorite thing about being a member of the royal family. “I asked her what’s it like to be a princess because I’d like to be one, and she said her favorite thing was meeting special people like us,” Mahira Gazi, 10, said, according to Hello! 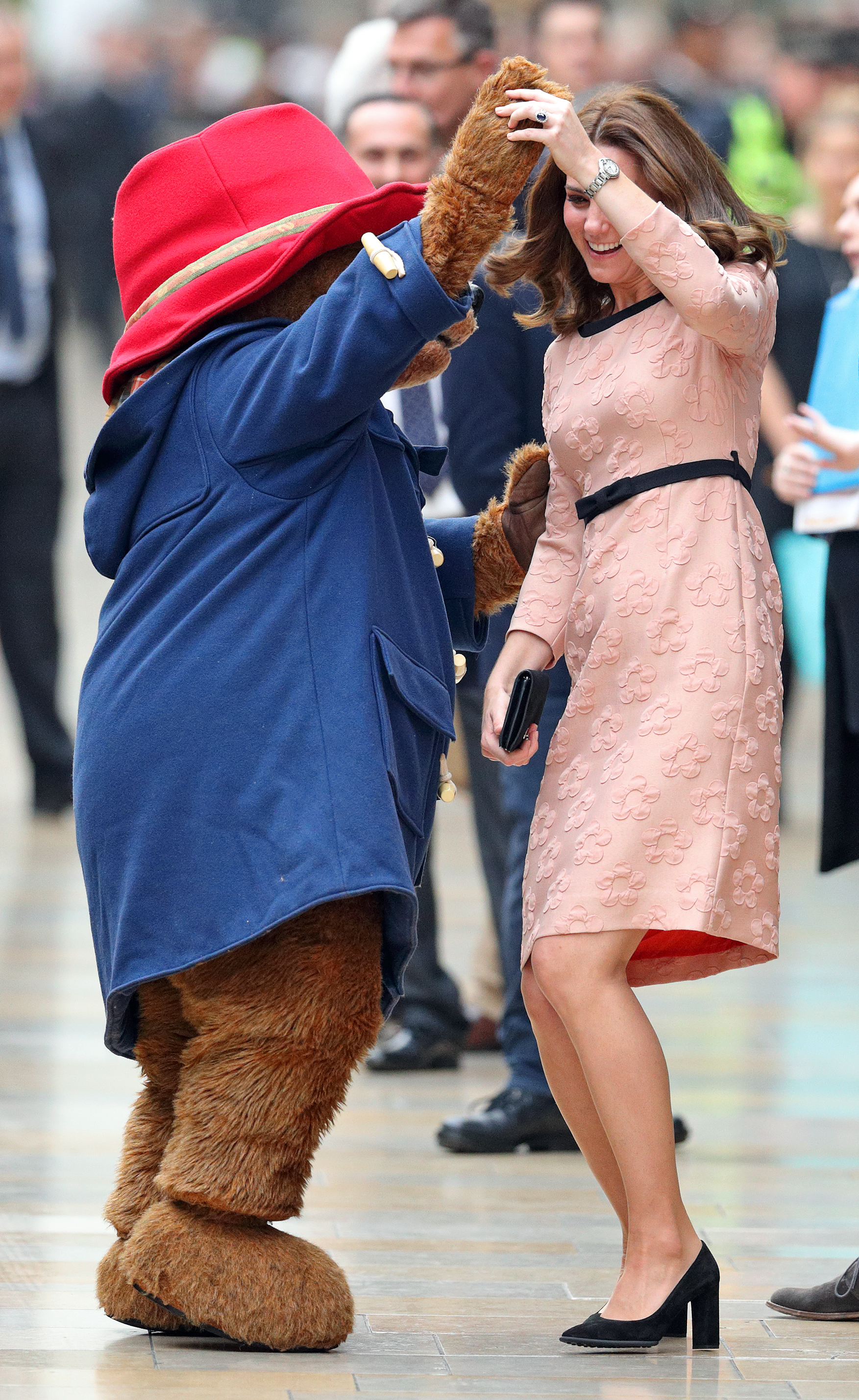 The 35-year-old has been forced to miss a number of important events, including her son’s first day at school, due to extreme morning sickness, called hyperemesis gravidarum. The same nasty condition she battled while pregnant with 4-year-old son, George and 2-year-old daughter, Charlotte. Kensington Palace said Catherine was feeling “better, but she’s still suffering.”

Last week, the Duchess made a return to the spotlight in honor of World Mental Health Day. It was the first time in six weeks that the much-loved royal had been seen out and about. Alongside her husband, Prince William, and brother-in-law, Prince Harry, Kate stepped out in honor of World Mental Health Day, an event at Buckingham Palace to celebrate those working in the mental health sectors across the United Kingdom. She debuted a hint of a baby bump in a powder blue lace dress designed by London-based brand Temperley for the important occasion. 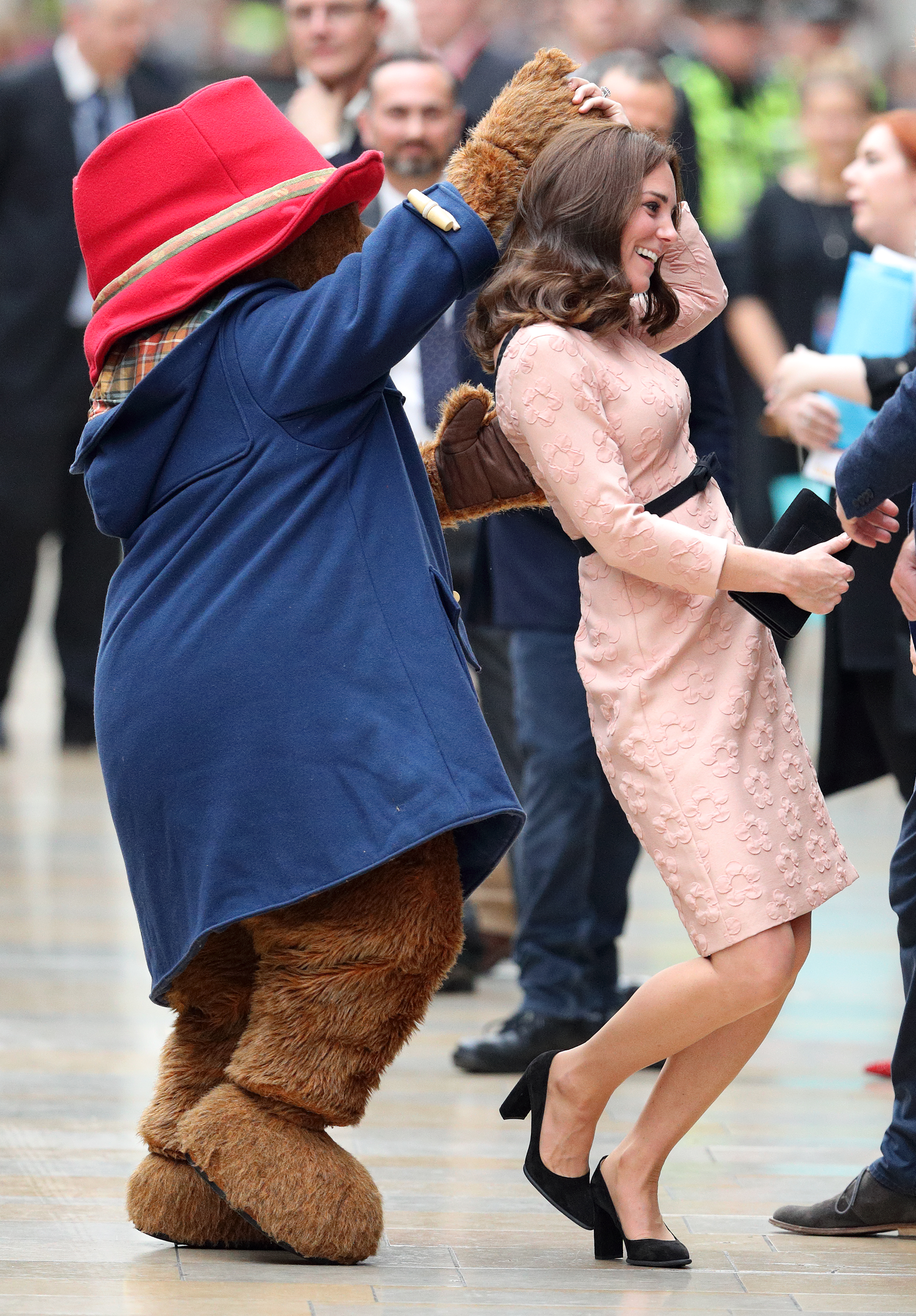 Kate and William announced last month that they are expecting their third little prince or princess together. “The Duke and Duchess of Cambridge are very pleased to announce that The Duchess of Cambridge is expecting their third child,” Kensington Palace said. “The Queen and members of both families are delighted with the news. As with her previous two pregnancies, The Duchess is suffering from Hyperemesis Gravidarum. Her royal highness will no longer carry out her planned engagement at the Hornsey Road Children’s Centre in London today.”

It concluded: “The Duchess is being cared for at Kensington Palace.” Congratulations again to the soon-to-be family-of-five!