Throughout the years, The Young and The Restless has always excelled at telling multigenerational storylines. When Joshua Morrow (Nick) joined the soap in 1994, his alter ego tested the boundaries of parents Victor and Nikki. Only three years later, Morrow found himself on the other side of the familial fence when Nick became a stepdad to Cassie, played by Camryn Grimes. In honor of the soap opera’s 45th anniversary, Soaps In Depth sat down with Morrow and Grimes (who is now playing the late Cassie’s twin, Mariah) to chat about their characters, evolving relationships and being on this iconic show.

Soaps In Depth: Do you remember what your first impression was of one another?

Joshua Morrow: I remember meeting her in the hallway, and she was just the most adorable little thing that I’d ever seen in my life. Red hair and freckles — they were everywhere. She was missing some teeth. But when I worked with her, I realized that this girl was not just cute and adorable, she was an unbelievable actress making very mature choices in a stressful environment. I’ve always been floored by her professionalism and talent. I’ve been a big, big fan of hers since day one, and love her like my own daughter. She’s a great person, inside and out. It sucks that she’s 1,200 times more talented than I am, and she likes to remind me of it!

Camryn Grimes: No, I don’t! Everyone asks me this question. I was way too young to remember any first impressions. I remember coming to find out that he was a giant goofball. We just had a lot of fun. I have fond memories of us horsing around. You could tell even from that age that he would be a great dad, and he was great with kids. 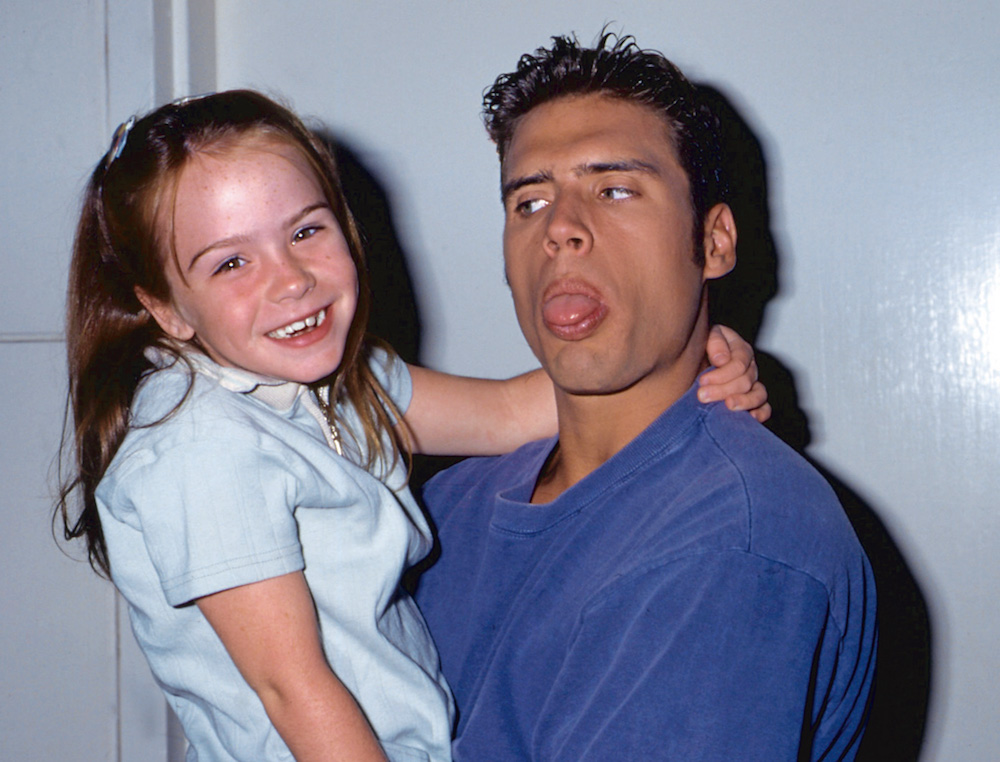 In Depth: Back in 1997, you were pretty young yourself, Joshua. Was it weird to be playing a father?

Morrow: It didn’t feel weird to me because I have two little sisters who are much younger. I’d volunteer at their youth rec programs and coach their teams. I thought the storyline was really mature, about adopting a little girl into your life who had it rough. Being a dad is the most comfortable thing for me as an actor. It just suits me. I never struggled with it.

In Depth: How about you, Camryn — was it weird to have Joshua as a dad?

Grimes: No. Both my parents were really young. They had me at a really young age, so it probably seemed more normal to me.

In Depth: Over the years, is there any lesson that you’ve learned from each other?

Morrow: I was overwhelmed at how good she was as an actress at an early age. It’s one thing to go there, be really cute, and eat some Cheerios. But they were giving some really powerful, strong material to Cammy, and she handled it like a champ. I realized that just because they’re little kids, you don’t expect them to come out and deliver these really strong performances. That’s what Cammy taught me. Acting isn’t about an age. It’s about tapping into something inside you and bringing it out. You don’t have to be a specific age to do that. Cammy is one of the best actresses I’ve ever worked with. The storyline with Tessa, that is some of the best work I’ve ever seen on this show — ever! She just breaks your heart with what she’s doing. To be given this story that is so powerfully told by [executive producer/headwriter] Mal [Young] and the writing team… I’m just beyond impressed!

Grimes: I learned to always have fun. Joshua is a big jokester and prankster. He taught me, “Don’t take yourself so seriously, and be kind.” 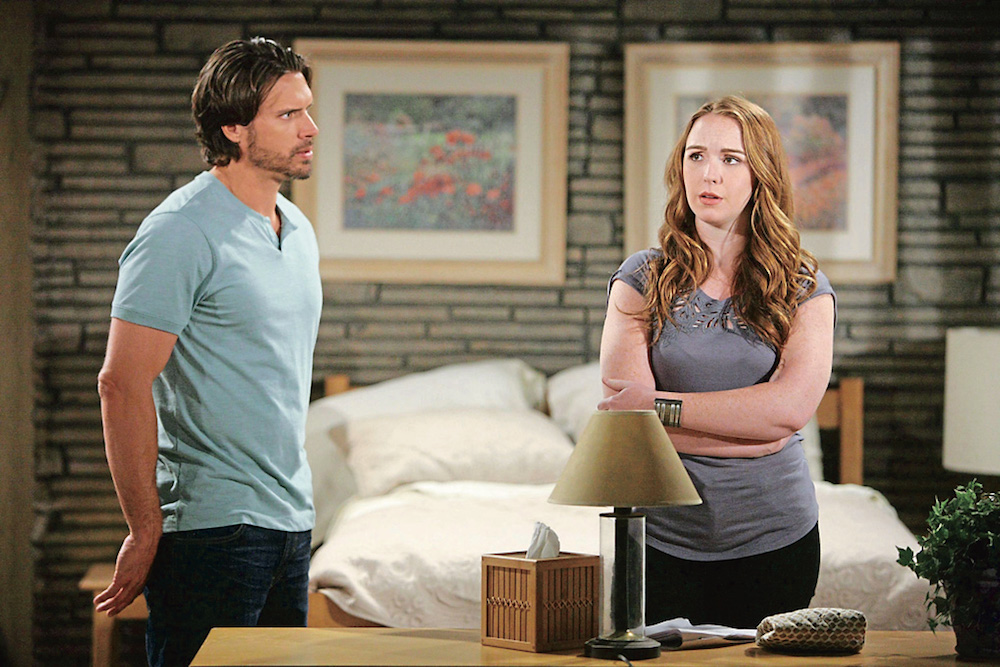 In Depth: Fans were thrilled with the introduction of Mariah and Camryn’s return. How has your dynamic changed?

Morrow: When she played Cassie, she was my daughter and was a child. Then she went off and had these very impacting, formative years when she wasn’t in my life. She came back as this beautiful young woman. I was like, “Oh my God, look at her. She’s just so different and so strong.” She’s obviously the same person, but she’s wired differently now. It was an adjustment for me! She was like my little stuffed-animal-passing partner in crime, and then she came back and she was talking about boys. I was like, “Whoa!” It probably helped that she was playing a different person. They had begun writing it where Mariah really wanted to hook up with Nick. I would go home and tell my wife that that was really funky for me. Cammy was terrified she would have to make out with me. She turned a shade of green not listed on the crayon box.

Grimes: He loves that! That is his favorite story. I’m probably the one woman in the world who is horrified at kissing Josh Morrow. As far as the dynamic changing… everything has changed about our relationship, except the overall sentiment, which is you have two people who are incredibly fond of each other, who respect each other and who joke around. All of those things are still there, but the nature of our conversations have changed. I’m an adult now. Although I’m still cautious what I say around Josh [about boys] because that protective nature is still there. He really was like a second dad to me. There are some subjects that I won’t talk about in front of him.

In Depth: If you had to describe each other with one word, what would it be?

Morrow: Clever. I really like the way her mind works. We have very similar tastes in film and things. I just think she has a very clever, dry mind that I’m really drawn to. She’s like my daughter. I look at her with pride. It’s like, “This one turned out just the way I wanted her to.”

Grimes: In my head I was thinking prankster. Okay, I will go with prankster. And comedian. He’s the funniest guy I know.

In Depth: What is your favorite storyline you worked on together?

Morrow: My favorite is also my least favorite — when Cassie died. It was a really powerful story. I have never been more proud of our show, production-wise, talent-wise, and performance-wise. It was just beautifully told and wonderfully acted, to watch this little girl tell this very mature story with such courage and bravery. It was heartbreaking. It was obviously the end of the character, so we all knew we weren’t going to see this amazing, beautiful little girl grow up anymore. She was leaving. The courage that she showed was overwhelming at times, and it put me in a natural depression. I was not looking forward to the story… and it took me a while to get over it. I would have to say that it was my favorite, though, because of the work that we did, and the story that we are still telling because of it.

Grimes: I don’t really remember a lot of storylines [from when I played Cassie]. You know what’s funny, weirdly enough, is the Nick and Mariah stuff. I personally did not have any fun doing it. But it’s been really fun in hindsight, laughing about it. And it was the most stuff that we had together since I came back. It’s not my favorite… but it’s my favorite looking back because it’s funny. Or when Nick first discovered Mariah. We had some good emotional scenes.

In Depth: What lesson have you learned from your time at the soap?

Grimes: Oh, I’ve learned all my life lessons from the show. Hard work, perseverance… just my work ethic. That’s the most important. How to be a good employee and a good friend.

Morrow: Humility. I was always a very cocky, aggressive alpha-dog guy in sports. That was the only background I knew, and when I came onto this show, I remember [former executive producer] Ed Scott taking me out onto the balcony and being like, “Listen, dude, you need to learn some things about operating in a company full of people and learning to maintain a level of professionalism that is required, because if this is something you want to do, you need to grow up a little bit.” That is what it taught me. You can’t take this job for granted. You can’t treat people any different than you would expect to be treated yourself. This is the ultimate team sport for me. No one is more important than the other. We are all doing the job with the same goal, which is to put on a show that people are proud to watch.

This article originally appeared on our sister site, CBS Soaps In Depth.

More from CBS Soaps In Depth:

The Photo That Had Some The Young and Restless Fans Believing Camryn Grimes Was Pregnant!