Kate Middleton and Prince William know how to do a royal red carpet takeover. On Sunday, February 18, the pregnant mother-of-two and her beautiful baby bump arrived at the Royal Albert Hall for the annual British Academy Film Awards — and she looked dazzling.

Kate was joined by her husband, Prince William, and the pair made a very graceful entrance as they stepped out for the 2018 BAFTAs. The proud mom to Prince George and Princess Charlotte turned to her favorite designer, Jenny Packham, to dress her for the event. Kate, who is expected to give birth in April, highlighted her bump in a flowing emerald green gown, which featured a sweetheart neckline and a black ribbon belt.

To complement the Hollywood-inspired outfit, Kate wore a smoky eye and soft waves. She completed the look with royal jewels, of course. She donned matching emerald and diamond necklace and earrings.

Why didn’t Kate Middleton wear black to the BAFTAs?

Although the 36-year-old looked beautiful, her choice of dress color did cause controversy. This year, the BAFTAs took a stand against sexual misconduct, the gender pay gap, and discrimination that occurs in the entertainment industry. Following the same lead as their former red carpet predecessors, celebrities opted to wear black in solidarity with the Time’s Up movement.

Because Kate is a member of the royal family, she is discouraged to take a political stance on any issues; she’s not even allowed to vote. The royal family’s website states: “As head of state, the Queen has to remain strictly neutral with respect to political matters.” It’s also ill-advised for the British royal family to wear the color black unless they are at a funeral or it is Remembrance Day. 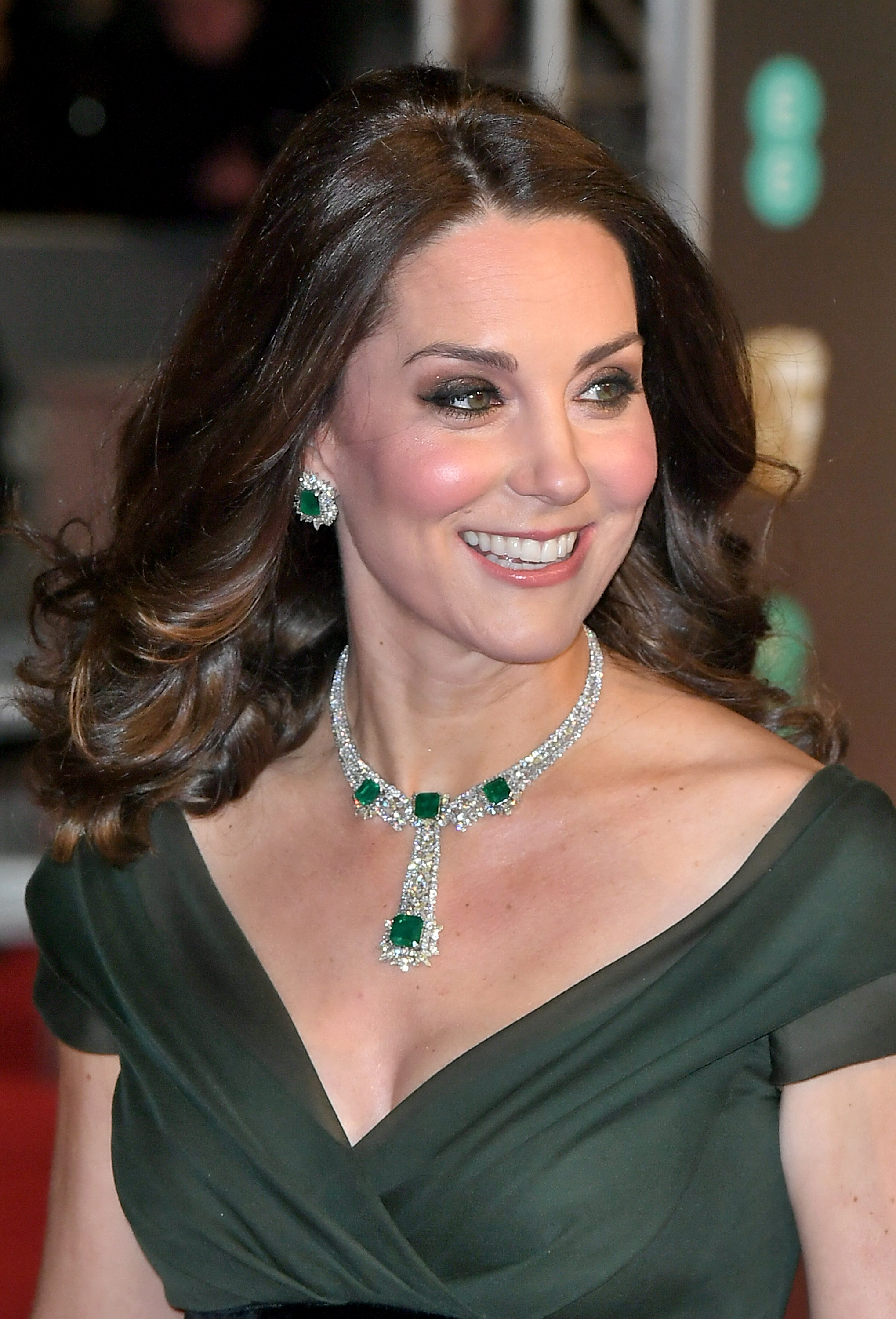 Kate has taken fashions risks in the past, with dress hemlines above the knee, casual jeans, and wedges, but this time, she decided to play it safe. Kate has been highly vocal about supporting women’s issues and has focused her royal efforts on raising awareness for mental health and motherhood.

“Personally, becoming a mother has been such a rewarding and wonderful experience,” she said in a speech last year. “However, at times it has also been a huge challenge. Even for me, who has support at home that most mothers do not.”

Although she didn’t wear black, some fans believe Kate did her part in supporting the movement. The royal did wear green, which many have noted could be a nod to the suffragette flag colors, and her subtle black ribbon on her gown might have been her way of playing ode to the evening’s dress code. 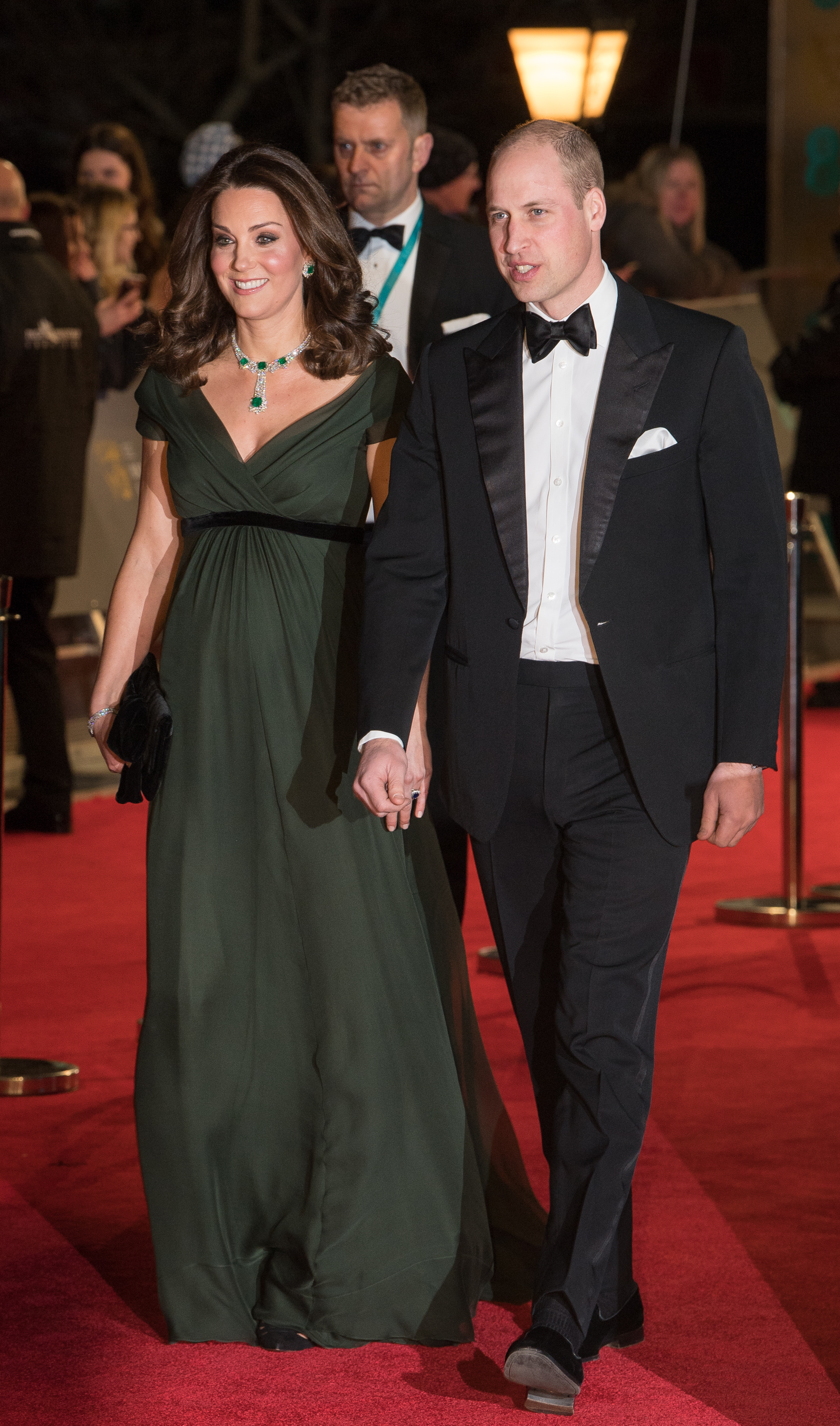 Kate and William were deemed the guests of honor at the event. This is the second time we’ve seen Prince William, who is the president of BAFTA, step out for the awards with his wife. William presented the evening’s most prestigious accolade, the Fellowship Award, to director Sir Ridley Scott.

Last year, Kate made her debut on the red carpet in a custom floor-length gown from British designer Alexander Queen. She braved arctic temperatures with the off-the-shoulder design to show off the green and violet embroidery and satin ribbon detail.

What would happen if Kate Middleton had twins? Find out in the video below: