Kate Middleton is doing her part to spread some Christmas cheer to those families who lost their homes when the Grenfell Tower fire tragedy struck six months ago. Kate, 35, dropped by the Rugby Portobello Trust in North Kensington, which is less than a mile from the site of the destroyed tower block, on Tuesday, December 12.

The trust has been pivotal in offering support to people affected by the devastating fire, and provides former residents access to grants and private donations and helps with their new accommodation. During the visit, the mother-of-two (with another due in April) took part in a music workshop and helped organize the children’s Christmas party. Wearing a burgundy colored coat with a hint of sparkle by maternity-wear specialist Seraphine, the beloved royal also took the opportunity to hand out some much-deserved gifts. 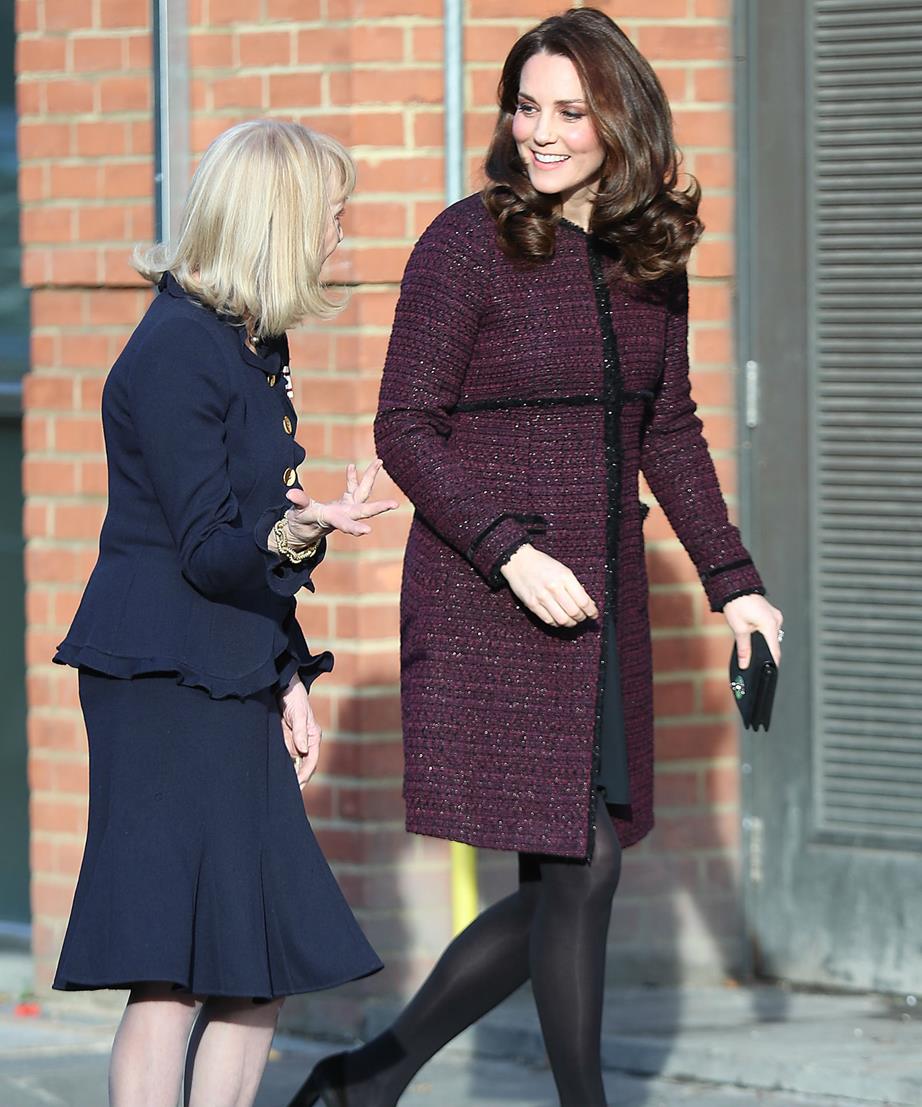 Kate, who is expecting her third child in April, concealed her growing baby bump under a burgundy colored coat dress by Seraphine. (Photo Credit: Now to Love)

The Grenfell Tower inferno took the lives of 71 people and left hundreds homeless on June 14.

On Thursday, December 14, Kate is expected to join husband Prince William, Prince Harry, Prince Charles, and Camilla, Duchess of Cornwall, to attend the national memorial service at St. Paul’s Cathedral for those who suffered in the tragic event.

Kate, William, and Harry made an undisclosed donation to an emergency appeal helping those affected by the blaze. The golden royal trio sent the donation to the Evening Standard’s Dispossessed Fund shortly after the tragedy unfolded.

The Duchess of Cambridge hands out Christmas presents at the @RugbyPortobello Christmas party for the 'Magic Mums' group. 🎁 🎄 pic.twitter.com/zoaTp2jrVZ

At the time, in a statement issued to the newspaper, a Kensington Palace spokesman said: “The tragedy at Grenfell Tower has left a number of local people in need of urgent assistance. The Duke and Duchess of Cambridge and Prince Harry are pleased the Evening Standard’s Dispossessed Fund has immediately swung into action. As residents of the local area they are keen to offer their immediate support.”

Queen Elizabeth and Prince Philip also paid tribute to all those who had been affected by the monster blaze.

In a statement from Buckingham Palace, the 91-year-old monarch sent thoughts and prayers before praising the tireless efforts of all those who worked to save trapped residents and aid those affected by the inferno.

This post was written by the writers at Now to Love. For more, check out our sister site Now to Love.