Prince William and Kate Middleton recently teamed up for a jam-packed day of royal duties. The Duke and Duchess of Cambridge traveled to Coventry, England on Tuesday, January 16. They were kicking off the tour with a visit to the famed Coventry Cathedral — built in the 15th century — which was destroyed by German bombers during World War II in 1940.

During the visit, Kate, who is expecting her third little prince or princess in April, proved her parenting prowess after she spotted a sick-looking little boy amongst the masses of people. The youngster was 10-year-old Craig Skipper, who had been waiting for three hours in the cold to catch a glimpse of the beloved royal.

“Princess Kate came over and give him a sick bag, our little Craig,” Carole Flynn, a learning mentor at his school, said to People. “I think he was a little bit overcome, he went quite pale. She came over to speak to him, and noticed he was not very well. She asked if he was OK. She bent down and was concerned.”

Wearing a bright pink coat by Mulberry, (a piece we saw twice during her pregnancy with Princess Charlotte, and a subtle hint she could be expecting another daughter, perhaps?) Kate sprang into action after a brief chat with the pint-sized royal enthusiast. She discreetly secured a paper bag from her security personnel and handed it to the young man just in case an accident were to happened.

“It was lovely of her,” Carole said. “She really took time with him. You can tell she is a mum, and has got that caring side.” Luckily, we hear the bag wasn’t needed. 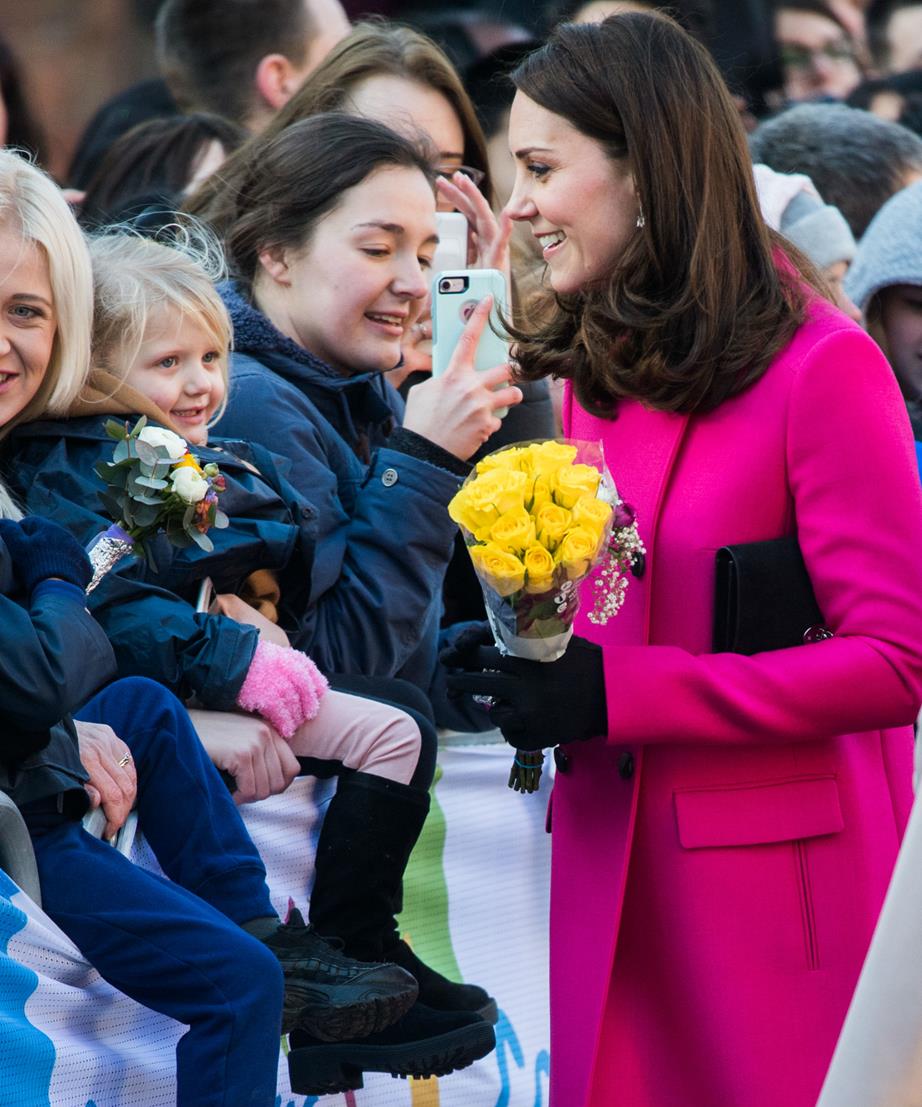 Kate, who is expecting her third child in April, took the time to chat with many of those who had waited in the cold to catch a glimpse of the royal couple. (Photo Credit: Now to Love)

Kate, 36, and William, 35, dropped by a variety of locations while visiting the region. They stopped at Rising Cafe, a local restaurant that aims to provide work and training for young people overcoming drug and alcohol addictions, Coventry University, and a youth services center that works with young people living in “challenging circumstances.”

It’s certainly a busy time of year for the royal duo. The doting parents are currently preparing to visit Norway and Sweden on official royal duty from Tuesday, January 30, to Friday, February 2. Their royal tour will consist of many routine activities such as meeting and dining with fellow royals, walking around, and viewing galleries and gardens. But, the Swedes have also also decided to bump it up a notch.

TRH also met staff and volunteers at the @CovCathedral Rising Café – a social enterprise aimed at providing work and opportunity for those overcoming drug and alcohol addictions. pic.twitter.com/VCaE5AHldl

The couple are expected to rub shoulders with stars Stellan Skarsgård and Alicia Vikander during a swanky black-tie dinner at the residence of the British Ambassador. Norwegian fans shouldn’t worry, though — William and Kate will be dazzled by Oslo’s stunning views.

A Kensington Palace spokesperson shared, “The Duke and Duchess are keen to experience a taste of the Scandinavian way of life for themselves, and to see how people of all generations battle the elements to make the most of their surroundings, whether ice-skating in Stockholm’s local parks, or skiing off-piste in the hills that surround Oslo. The U.K.’s links with each country are extensive, and their royal highnesses are looking forward to building a lasting friendship with the people of both Sweden and Norway.”

It’s believed Prince George and Princess Charlotte will remain at home due to their schooling.