Everybody knows Desi Arnaz loved Lucy both on and off-screen. What’s less well known is that Lucille Ball was much more happily married to her second husband, comedian Gary Morton. “Boy, did I pick a winner!” Lucy wrote to a friend in 1983 when she had been wed to Gary for 22 years. “After 19 years with that Latin lover” — Lucy didn’t even deign to write Desi’s name — “I never expected to marry again, but I’m sure glad I did!”

A freshly uncovered trove of love letters between Lucy and Gary sheds new light on their lasting bond. “I’m just sitting here thinking how much I love you,” she wrote in one late-’60s note. “You are a real special ‘guy,’ Gary, and ‘my guy.’ Bless you. Your missus.” As Lucy explained in her memoir Love, Lucy (posthumously published in 1996), “I’ve always wanted to share with someone the good and the bad. Especially when things are good, you need someone. [And] Gary was good for Lucy.” But Lucy’s love life hadn’t always been so good. 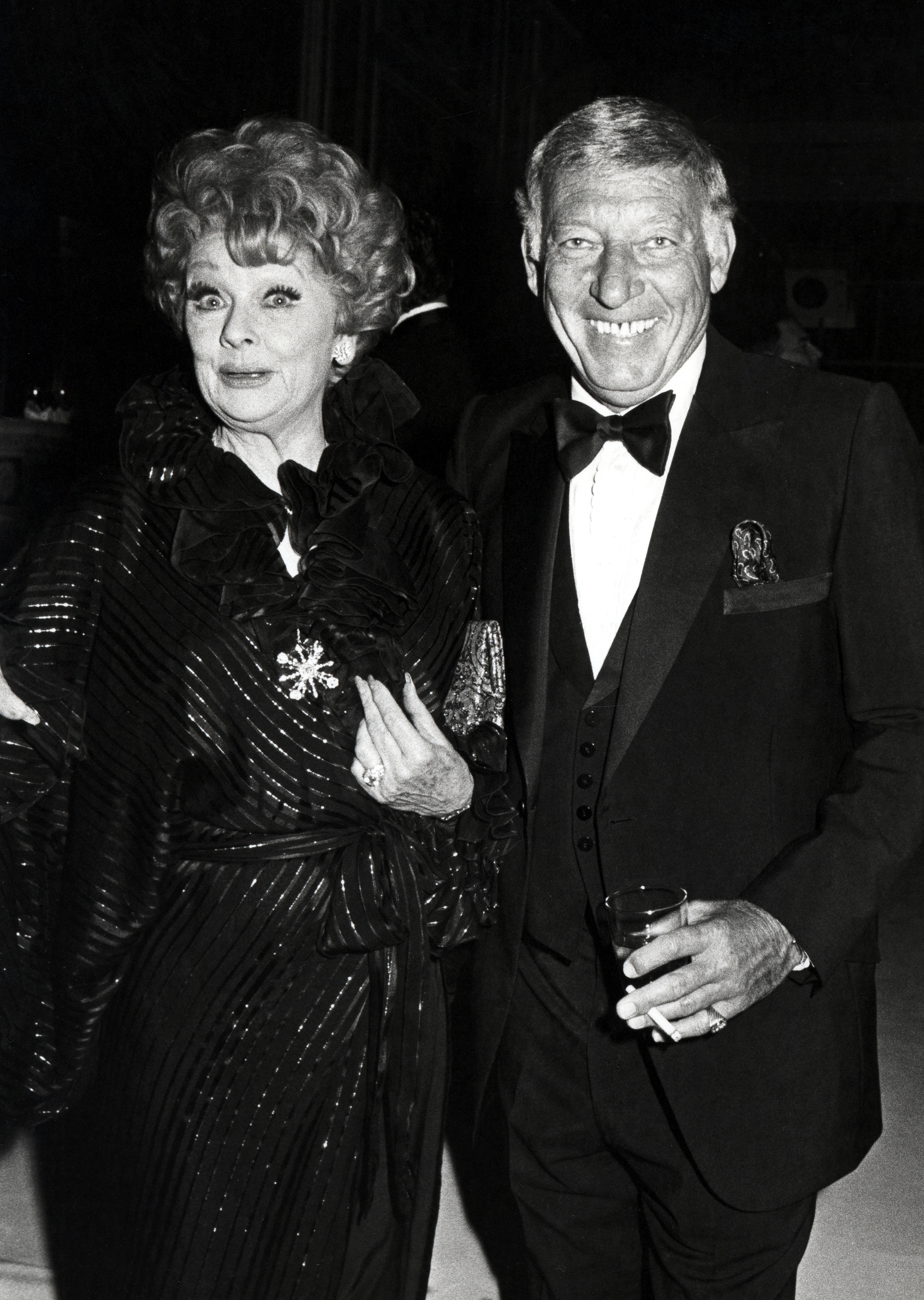 Lucy fell hard for Desi when she first spied him on-screen in the 1940 movie Too Many Girls. At the time, she was a budding actress and he was a big band leader. Their romance was stormy, but they did work well professionally and made the hit show I Love Lucy. They also created Desilu Productions, which produced popular works including The Untouchables. But Desi’s appetite for booze and women humiliated Lucy, who hated being caught in scandals.

“People wonder why they got divorced, but I wonder how they stopped from killing each other!” said Lucy’s longtime friend Carole Cook in an exclusive interview with Closer Weekly. “Desi had it together when they were building the empire, but once they attained it, it just wasn’t exciting anymore, and things fell apart.” By 1960, three years after I Love Lucy went off the air, Lucy was fed up and finally divorced Desi. She was pushing 50 and had no desire to date, but her friend, comedian Jack Carter, wanted to set her up with Gary, a nightclub comic 13 years her junior. 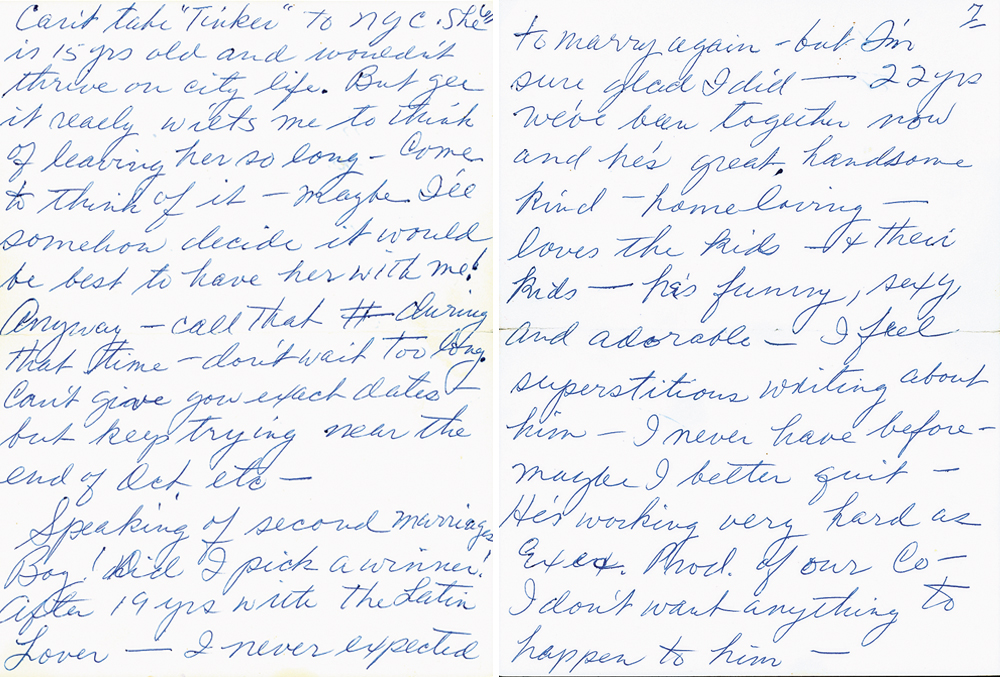 They agreed to meet for a midnight supper at a pizza place in New York City, where Lucy was toiling in the short-lived Broadway musical Wildcat. “Gary said the thing he liked first about me was the way I walked head up, like a thoroughbred,” Lucy wrote. “‘Light me a cigarette,’ I said offhandedly to this big, tanned six-footer. I tossed a cigarette in his direction. Gary picked it up and tossed it right back. ‘Here,’ he said. ‘Light it yourself.'” A spark had been struck. Unbelievably, Gary claimed he hadn’t heard of Lucy. As a road comic, he’d always been working Monday nights and never caught I Love Lucy. Still, they were kindred spirits.

“When that first evening ended and Gary took me home, I felt more like myself than I had in months,” Lucy said. She had doubts about the age difference and income gap, but “I realized Gary had the natural humor of someone who loves to laugh and wants everyone to laugh with him,” she wrote. “That made two of us.” Gary asked Lucy if he could call her every night and queried, “Will you be my girl?” Lucy said she’d think it over but didn’t date anyone else. After they’d been courting 11 months and returned to Los Angeles, Gary proposed to Lucy on a plane to New York City. 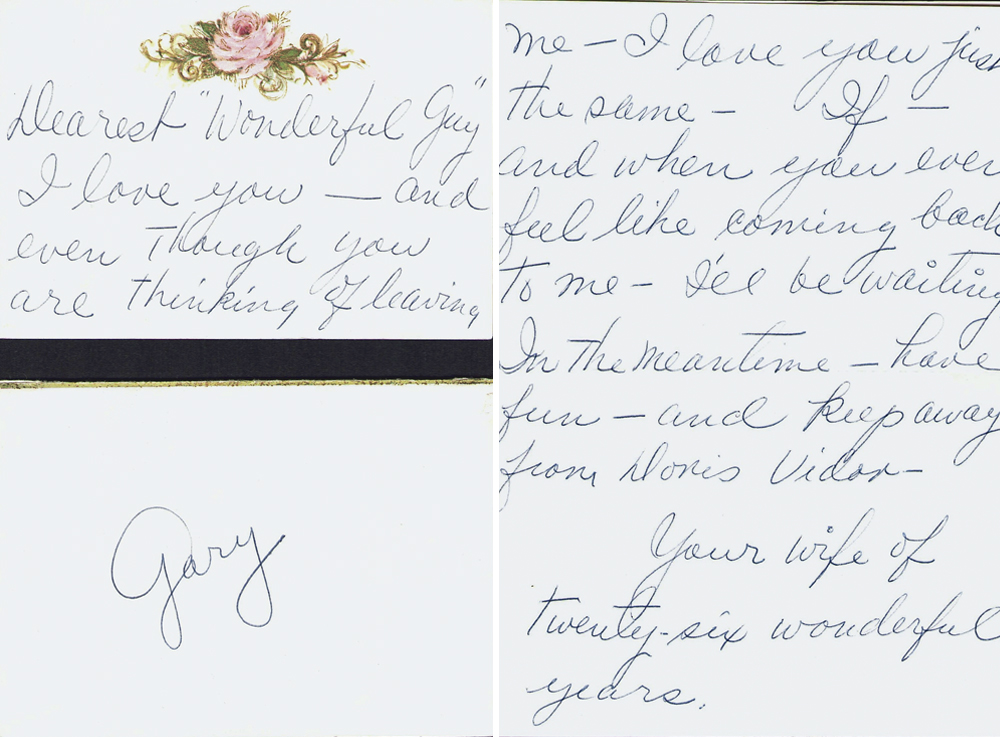 “‘Well,’ I hedged, ‘are you prepared for any swipes that they might take at you?'” Lucy said she asked him. “‘What if they call you ‘Mr. Ball?'” Gary’s response: “Who are they?” Lucy agreed to wed on the seemingly impossible condition Dr. Norman Vincent Peale (author of the best-seller The Power of Positive Thinking) could officiate that week. Turns out the doctor was in. The minister married Gary and Lucy in an intimate ceremony at his Marble Collegiate Church in New York City on November 19, 1961. There were only 40 guests, including Lucy’s kids, Lucie, then 10, and Desi Jr., then 8, and gossip columnist Hedda Hopper, a dear friend of Lucy’s. The ceremony lasted just 15 minutes, and the organist played “Make Someone Happy.”

“We were dumbfounded when we left the church to find a thousand people jamming the Fifth Avenue sidewalk,” Lucy wrote. “They were smiling and calling out, ‘Good luck, Lucy!’ It made us feel very, very good — starting our life together with so many good wishes.” 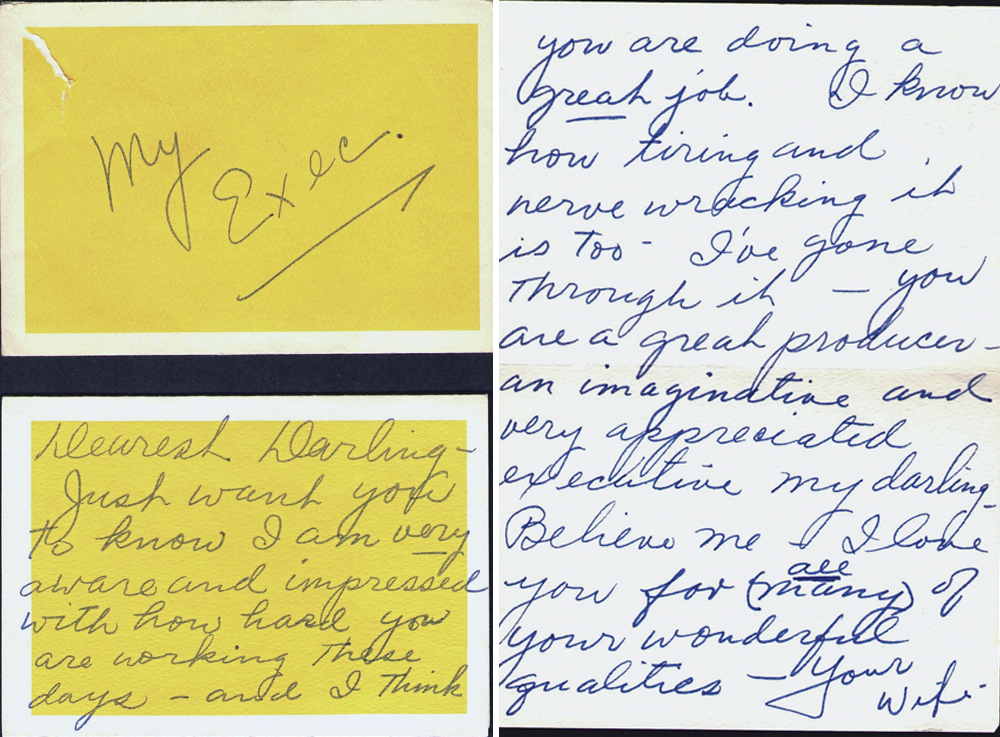 Lucy and Gary had a blissful honeymoon — at home in Beverly Hills, CA with the kids. “For five months, I sat and did nothing,” the lifelong workaholic said. “For the first time in my life, I learned how to relax.” And it felt like heaven. “He’s great, handsome, kind and home-loving,” Lucy wrote of Gary to a friend. “He’s funny, sexy and adorable.”

Gary became involved with Lucy’s production company as they made the hit sitcoms Here’s Lucy and The Lucy Show, and the couple proved equally compatible at work and home. “I just want you to know I am very aware and impressed with how hard you are working these days,” she wrote to him. “I know how tiring and nerve-wracking it is, too — I’ve gone through it. You’re a great producer, and imaginative and appreciated exec, my darling.”

Even more important, Gary provided Lucy with something she desperately needed after Desi broke her heart: laughter. “Gary was a very humorous guy,” Keith Thibodeaux, who played Little Ricky on I Love Lucy and remained friends with the family, tells Closer. “He was the opposite of Desi in that he could make Lucy laugh, and Desi made her cry more.” Agrees Frank Gorey, who was Lucy’s chauffeur for 30 years, from 1959 until her death, “Gary made her laugh, and that made her feel good.” And longtime friend and actress Ruta Lee tells Closer, “Gary was an amusing guy and full of gusto, vim, and vigor, and that’s what Lucy liked in human beings. Period.”

Gary offered another quality Lucy craved after her roller-coaster-crash romance with the womanizing, hard-drinking Desi. “He provided stability for her, and that was very important,” Lee Tannen, a relative of Gary’s and author of I Loved Lucy, tells Closer. “It was a good marriage. She wasn’t looking for something tempestuous anymore. With Gary, she went the other way from Desi.” When they were apart — usually when Gary or Lucy were touring with a show — they missed each other terribly. “I always feel the loss of you when I’m away without you,” Lucy wrote to him. “I find it hard to even plan anything without you.” 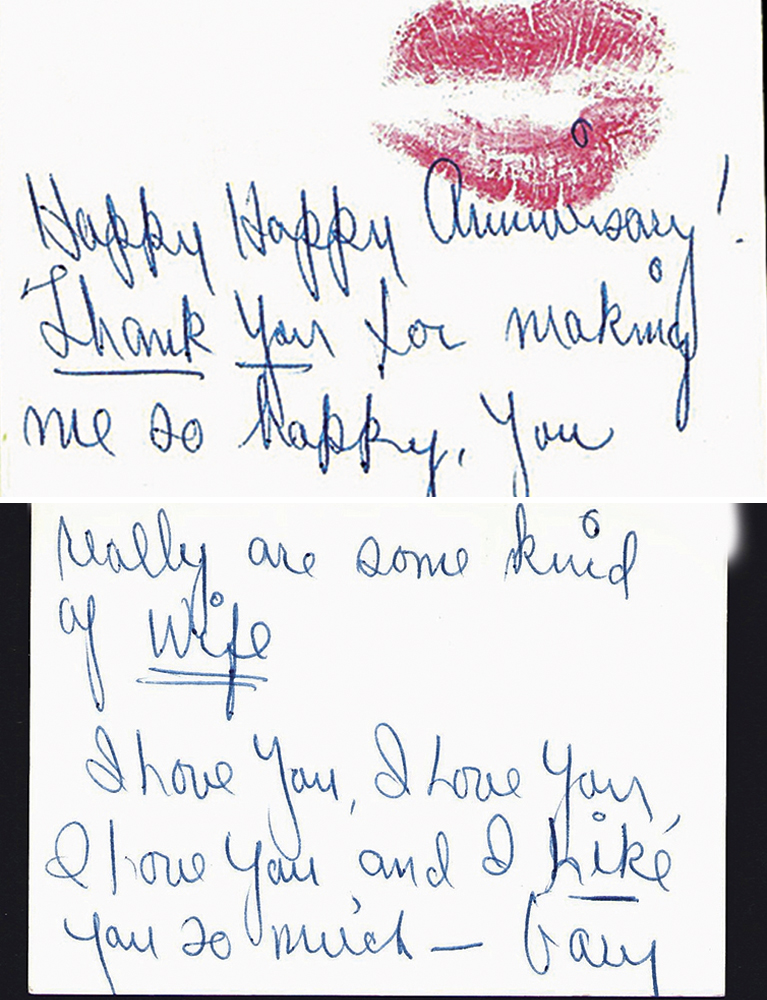 To reassure Lucy of his undying love, Gary gave her gifts like a gold, diamond, and pearl necklace, and other jewelry from Van Cleef & Arpels in Beverly Hills. “Happy Happy Anniversary,” he wrote on one card. “Thank you for making me so happy. You really are some kind of a wife. I love you, I love you, I love you and I like you so much.” Lucy’s kids — real and fictional — weren’t sure Gary was the right fit for Lucy at first. Says Keith, “I remember seeing this jalopy in front of their house — it was Gary’s car, and it looked out of place with all the Rolls-Royces and Lincolns.” Introducing a stepparent into a family is never easy, and it wasn’t for Gary with Lucy’s kids, either. He “wisely tried not to force himself on them or buy their favor with presents,” Lucy wrote. They slowly warmed up to him. “When they want to play, he’s available,” she said. “He wrestles with them and lets them chase him through the house shrieking with laughter, the sound I like best.”

Relations between Desi and Gary were strained initially. “I experienced the friction between Desi and Gary when he was first married to Lucy,” Keith says. “Whenever they would meet, there would be a little tension between the two of them — it was awkward and uncomfortable.” Yet Gary and Desi worked it out. “I’m grateful for the amicable feeling now between Desi and me and Gary and the kids,” Lucy wrote in the ’60s. “I’m glad for our kids’ sake they now have two happy homes instead of one miserable one.” 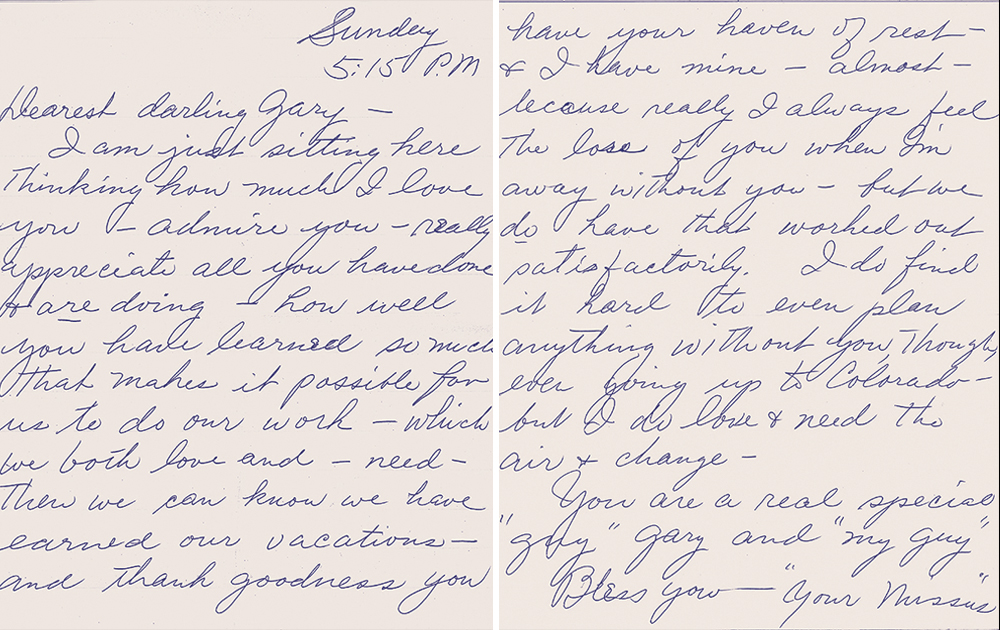 Desi got remarried to Edith Mack Hirsch in 1963. “She’s a sweet woman, and good for Desi,” said Lucy, who buried the hatchet with her ex-husband. “[We] keep in close touch about the children in a way we never could when we were married.” Through their 28-year marriage, Lucy and Gary’s passion never cooled. When Gary came home from work, “he would give Lucy a hug like he’d been gone for three weeks,” says Michael Stern, a family friend and author of I Had a Ball: My Friendship With Lucille Ball. “They had that loving of a relationship.”

As Lucy aged, she worried about losing Gary’s love, but he stayed by her side, literally saving her life when she was almost electrocuted on the set of The Lucy Show. “I feel superstitious writing about him,” she told her friend. “I don’t want anything to happen to him.” Gary loved Lucy until the day she died, at 77 in 1989 (he passed away at 74 a decade later). Their years together were the most joyous of her life. Said Lucy, “With Gary, I’ve become a woman with a capacity for happiness again.”

For more on Lucille Ball, pick up the new issue of Closer Weekly, on newsstands now — and sign up for our newsletter! 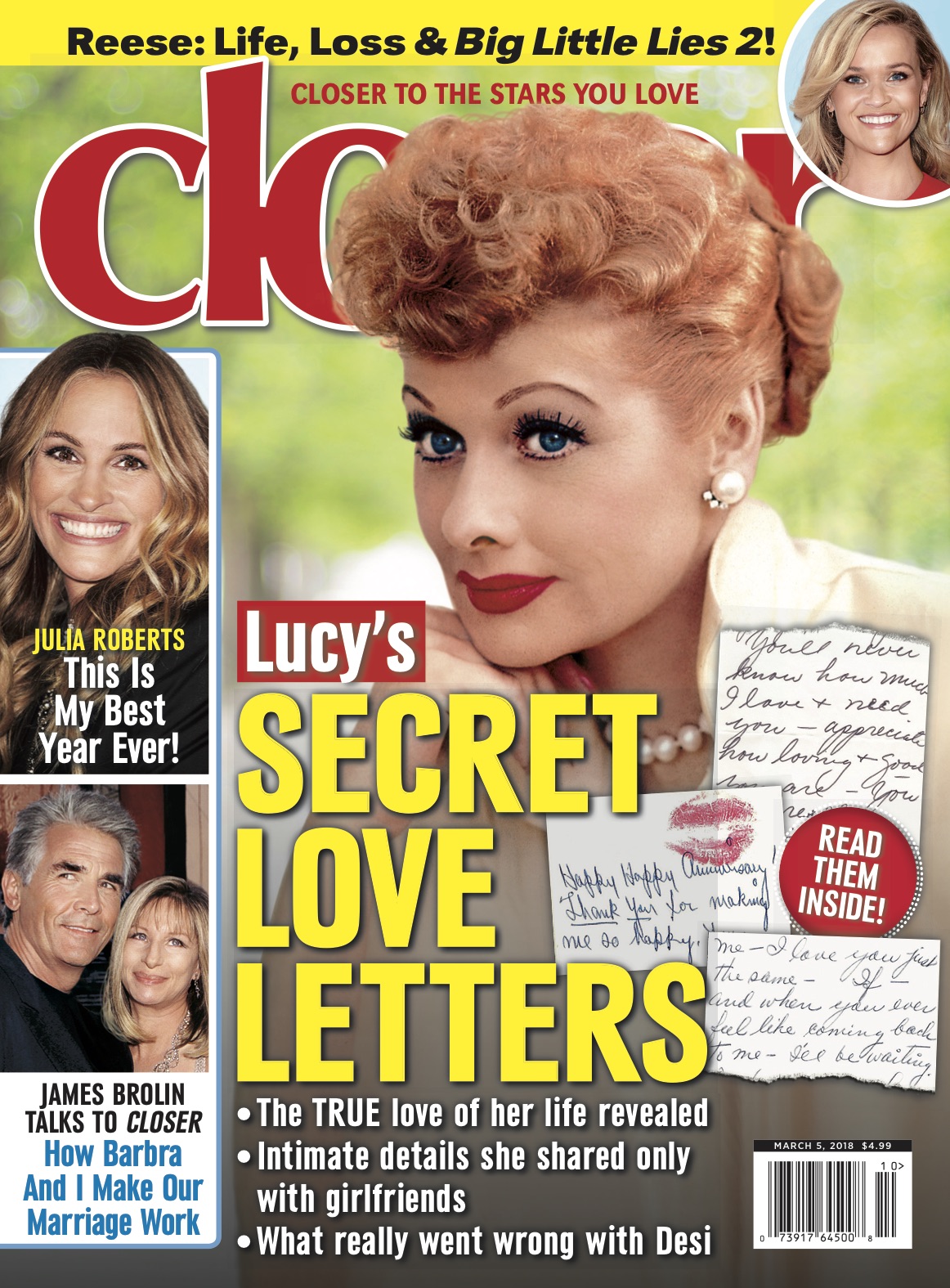 Vivian Vance and Lucille Ball Were an Iconic Duo — but They Didn’t Start out That Way!

Betty White and Lucille Ball Had Quite the Special Friendship: “They Considered Each Other Family” (EXCLUSIVE)