“A prestigious award for outstanding contributions to the world of entertainment.” Who could possibly be more deserving of that than the one and only Oprah Winfrey? The legendary talk show host, actress, and entrepreneur won the Cecil B. DeMille Award at the 2018 Golden Globes on January 7, and despite being an icon, she was still overwhelmingly grateful and humble as ever in her inspiring speech!

“Thank you, thank you all. Thank you,” she began. “In 1964, I was a little girl sitting on a linoleum floor of my mother’s house in Milwaukee, watching Anne Bancroft present the Oscar for Best Actor at the 36th Academy Awards. She opened the envelope and said five words that literally made history: ‘The winner is Sidney Poitier.’ Up to the stage came the most elegant man I had ever seen. I remember his tie was white and, of course, his skin was black and I had never seen a black man being celebrated like that. And I tried many times to explain what a moment like that means to a little girl, a kid watching from the cheap seats, as my mom came through the door, bone tired, from cleaning other people’s houses. But all I can do is quote and say that the explanation in Sidney’s performance in Lilies of the Field — ‘Amen, amen, amen, amen.'” 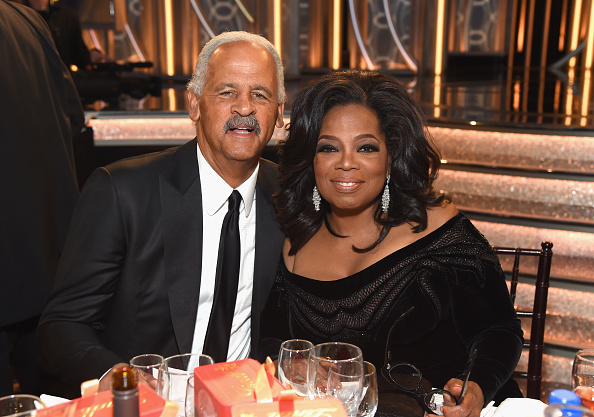 “In 1958, Sidney received the Cecil B. DeMille award right here at the Golden Globes and it is not lost on me that at this moment, there’s some little girls watching as I become the first black woman to be given the same award,” she continued. “It is an honor and it is a privilege to share the evening with all of them and also all of you, the incredible men and women who’ve inspired me and challenged me, who sustain me, and made my journey to the stage possible… What I know for sure is speaking your truth is the most powerful tool we all have. And I’m especially proud and inspired by all the women who have felt strong enough and empowered enough to speak up and share their personal stories.”

“Each of us in this room are celebrated because of the stories that we tell.” the icon went on to say. “And this year, we became the story. But it’s not just a story affecting the entertainment industry — it’s one that transcends any culture, gender, geography, race, religion, politics, or workplace. So I want tonight to express gratitude to all the women who have endured years abuse and assault because they, like my mother, have children to feed, and bills to pay, and dreams to pursue. They’re the women whose names we’ll never know — they are domestic workers, and farm workers, they are working in factories, and they work in restaurants and academic, engineering, medicine, and science. They are part of the world of tech, and politics, and business. They are athletes in the Olympics and they’re our soldiers in the military.” 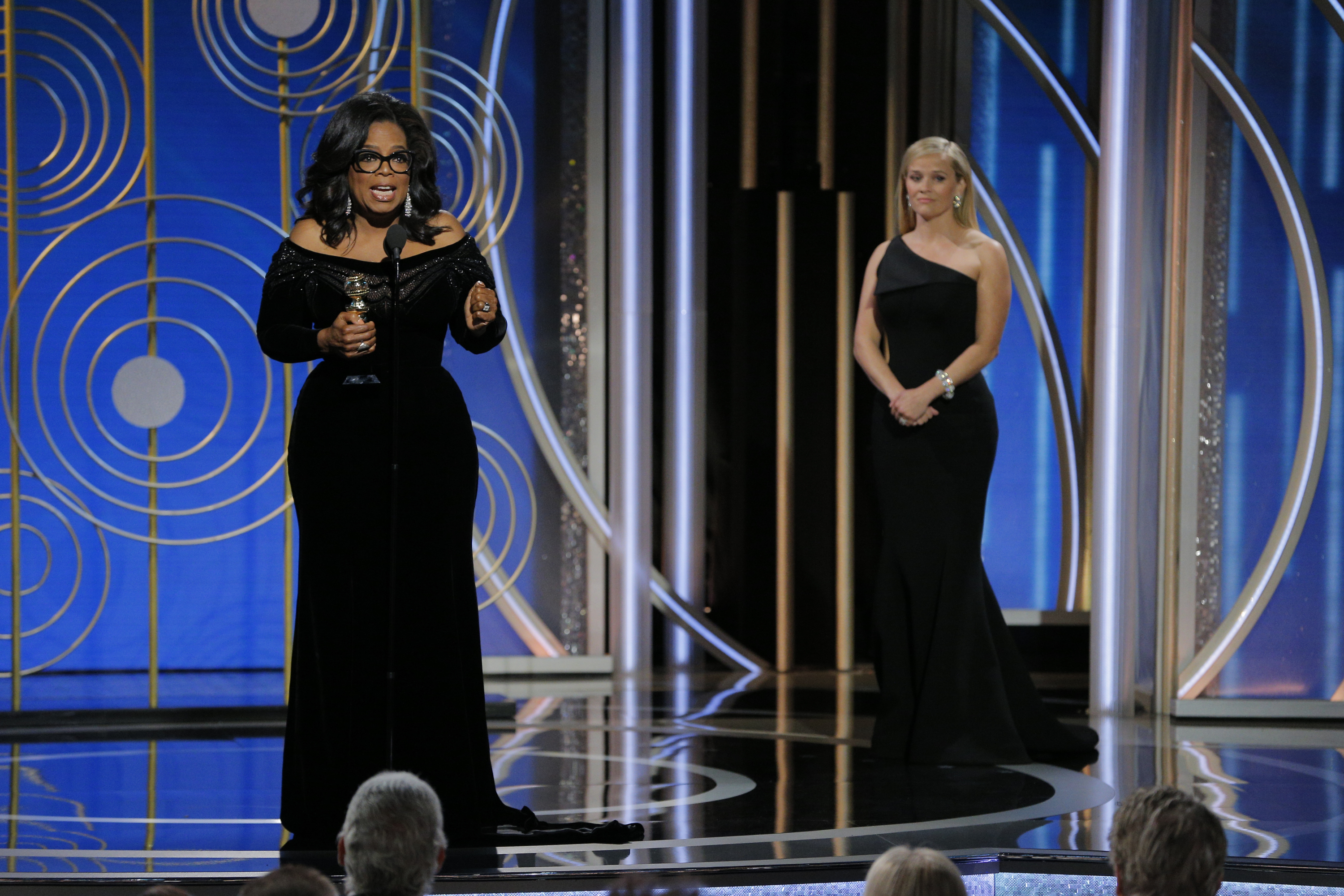 “For too long, women have not been heard or believed if they dared to speak their truth to the power of [men] — but their time is up,” she said, definitively. “In my career, what I’ve always tried my best to do, whether on television or through film, is to say something about how men and women really behave. To say how we experience shame, how we love and how we rage and how we fail, how we retreat, persevere, and how we overcome… So I want all the girls watching here now to know that a new day is on the horizon. And when that new day finally dawns, it will be because of a lot of magnificent women and some pretty phenomenal men. Thank you.” Go Oprah!

Oprah might be beloved by all, but the people she loves the most were in the audience cheering her on as she was given the honor. Her lifelong best friend Gayle King was thrilled for her pal, clearly teary-eyed as she supported the woman that has always had her back. Meanwhile, Oprah’s longtime boyfriend, Stedman Graham, was bursting with pride as Oprah spoke from the stage.

Oprah was presented the award by Reese Witherspoon, who was her co-star in the upcoming film A Wrinkle In Time. “There are a lot of people known on a first-name basis, but there’s only one person whose name is a verb, an adjective, and a feeling — and that is Oprah,” began Reese. “When you say her name, everyone stops and listens… I got to work with Oprah on our movie, A Wrinkle in Time, where we spent four hours in the makeup trailer almost every day. Guys, if you can find a way to be stuck in a small space with Oprah for four hours, do it — it’s like going to Wharton Business School combined with a spiritual retreat, all in one. I learned everything from how to make the best English muffin to what it’s like being the only woman as a board member at a huge company.”

“And her hugs? Oprah’s hugs could end wars [and] solve world peace,” she continued. “It’s like your oldest, dearest friend has just seen you after the longest journey of your life. It’s that good. When she hugs you, it’s the greatest thing ever. Just ask Gayle, she’ll agree. When I learned I’d get to introduce Oprah tonight, I began asking people, ‘If you could say one thing to Oprah, what would you say?’ And they all said different things, but every answer started the same — ‘Tell her thank you. Tell her thank you for teaching us, for inspiring us, for encouraging us, thank you for seeing us.'” 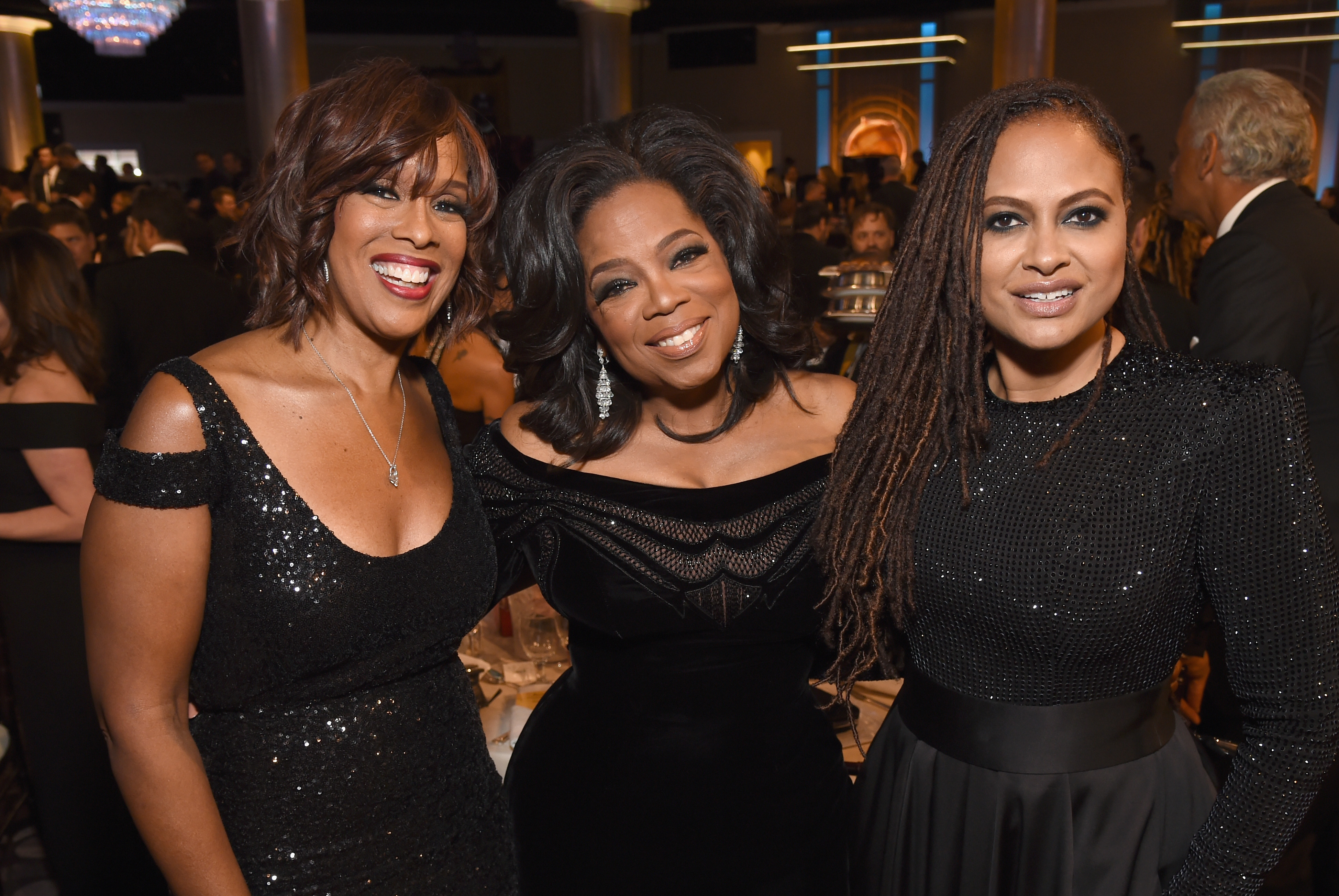 “So Oprah, thank you for your grace, your generosity, and your wisdom,” said Reese. “And thank you for your powerful contribution to the world of film and television. You’ve changed our lives.” The touching speech was followed by a montage of some of Oprah’s most memorable pictures, and it brought tears to our eyes! There’s nothing we love to see more than women supporting women, so it was a pleasure to see such icons come together for something so special. Congratulations, Oprah!

Angelina Jolie’s Date to the 2018 Golden Globes Is Her Teenage Son, Pax!