Prince George is officially five years old and to celebrate the milestone moment, the palace has released a heartwarming new photo of the smiling royal, and it’s the sweetest birthday portrait yet. “The Duke and Duchess of Cambridge are very pleased to share a new photograph of Prince George to mark His Royal Highness’s fifth birthday. Thank you everyone for your lovely messages,” the statement read. 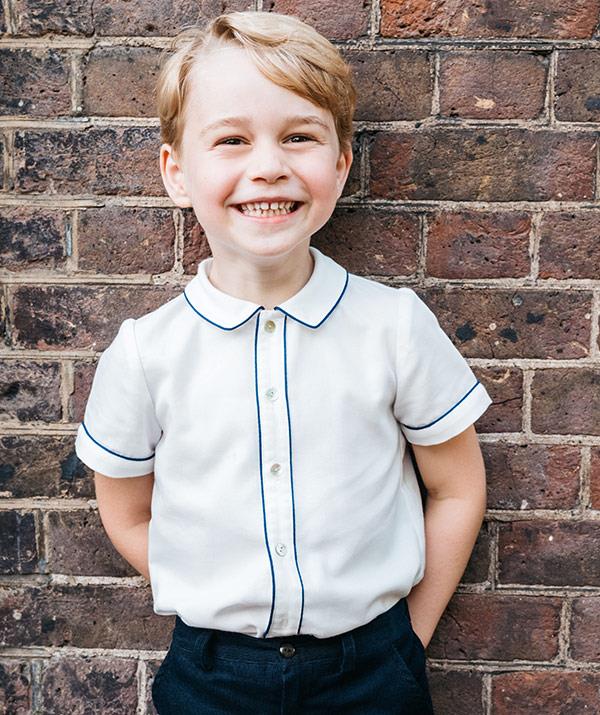 In the new photograph, the third in line to the British throne positively beams at the camera with his hands behind his back and a gorgeous grin on his face. And if you were thinking Prince George’s darling outfit looks familiar, you’d be right.

The birthday snap was captured in the gardens of Clarence House by Matt Porteous after Prince Louis’ christening on July 9. Porteous is the same photographer who photographed the magical moment between Duchess Catherine and Prince Louis after the royal baby’s christening and was released as a bonus pic.

Prince George will be celebrating his fifth birthday privately with his family on the island of Mustique as they enjoy their first holiday away with Prince Louis and the Middletons. The first child of Prince William and Duchess Catherine, Prince George Alexander Louis of Cambridge (and his gorgeous chubby cheeks) entered the world on July 22.

It’s been a jam-packed five years for the charming royal, who in his short time has become a loving big brother, a fashion icon, and the world’s number one relatable face thanks to his huge range of sweet expressions. Plus, he’s found a fun royal playmate in cousin Savannah Phillips.

In 2014, George traveled to Australia and New Zealand with his parents on his first official royal tour. He’s since joined his mom and dad on trips to Canada, Poland, and Germany.

The early years of his childhood were spent at the family’s country estate, Anmer Hall, before they moved back to Kensington Palace in London full-time. And last year, he reached another huge milestone as he started school at Thomas’s Battersea in London.

According to his proud parents, George has developed a strong little personality. “George rules the roost, and Charlotte isn’t far behind,” Prince William has said.

We also know he wants to be a police officer when he grows up, that he can speak Spanish, and that he’s taking after his creative mom Kate with his artistic eye. We’re wishing George the happiest of birthdays and many more years of joyful smiles!

This article was originally written by Bella Brennan. For more, check out our sister site, Now to Love.

Our Royal Family Predictions for the Upcoming Year