It’s hard to believe Prince Louis is now six weeks old. Since his April 23 arrival, the fifth in line to the British throne has been bonding with his family at their Kensington Palace apartment. While the newborn royal has been too young to attend recent events like the Royal Wedding of Prince Harry and Meghan Markle or the upcoming Trooping the Colour parade, he was spotted in May with his mom, Kate Middleton, and big sister Charlotte enjoying a walk around Kensington Gardens in London.

With Prince Harry and Meghan Markle’s big day done and dusted, the next upcoming event on the royal calendar will be Prince Louis’ christening, and an announcement with all the exciting details will be shared by Kensington Palace any day now. It’s believed that the baptism will take place in July, and by the time the milestone rolls around, Prince Louis will be a few months old.

Royal experts are predicting the ceremony to be just as intimate as previous occasions. In October 2013, Prince George’s baptism had just 22 guests and was held at the Chapel Royal at St. James’s Palace in London when he was three months old. Princess Charlotte’s had 21 official guests and was held in the more open setting of St. Mary Magdalene Church in Sandringham, which allows well-wishers to camp on the footpath to get a glimpse of the royals.

As we count down to Prince Louis’ next appearance, here are all the royal christening traditions you can expect to see at his baptism.

All royal babies are baptized by the sacred Lily Font bowl, which has been in the royal family and used in baptisms since 1841. The stunning silver piece is part of the Crown Jewels and was used for both Prince George and Princess Charlotte’s christenings.

Princess Charlotte will be baptised in the Lily Font, commissioned by Queen Victoria and Prince Albert in 1840. pic.twitter.com/BBL9QcMCso

In another poignant touch, all royal babies are christened with water from the River Jordan in the Middle East.

In 2015, the water was flown in especially for Princess Charlotte’s baptism, but they might already have some on tap after Meghan Markle’s recent communion in March — when she was baptized into the Church of England at the Chapel Royal in London.

So, why do royals use such fancy water for their christenings? It’s a nod to their religious beliefs, metaphorically representing how Jesus was baptized by John in the Bible.

Prince Louis will wear the same cream gown his siblings donned for their christenings. The new royal christening gown is a replica of the lace garment made for Queen Victoria’s eldest daughter — also named Victoria — in 1841. It was worn at royal christenings up until 2008 but was replaced with an exact match as it became too fragile to wear.

4. The Archbishop of Canterbury

Nanny Maria Borrallo is a crucial part of the Cambridge family and is always on-hand to help out at big events, most recently looking after the mini-bridal party at the Royal Wedding.

And who could forget when the real-life Mary Poppins attended Princess Charlotte’s christening in 2015, decked out in her Edwardian-style nanny uniform? The eye-catching beige ensemble, complete with bowler hat, peter-pan collar, a conservative below-the-knee hemline, and a pin-on watch, was created in 1892 and designed by the Norland College where Maria studied to be a super-nanny. Norland is the most prestigious nanny college in the world and Maria Theresa Borrallo’s training included special martial arts self-defense and “skid pan” stunt driving training to get away from paparazzi at high speed. 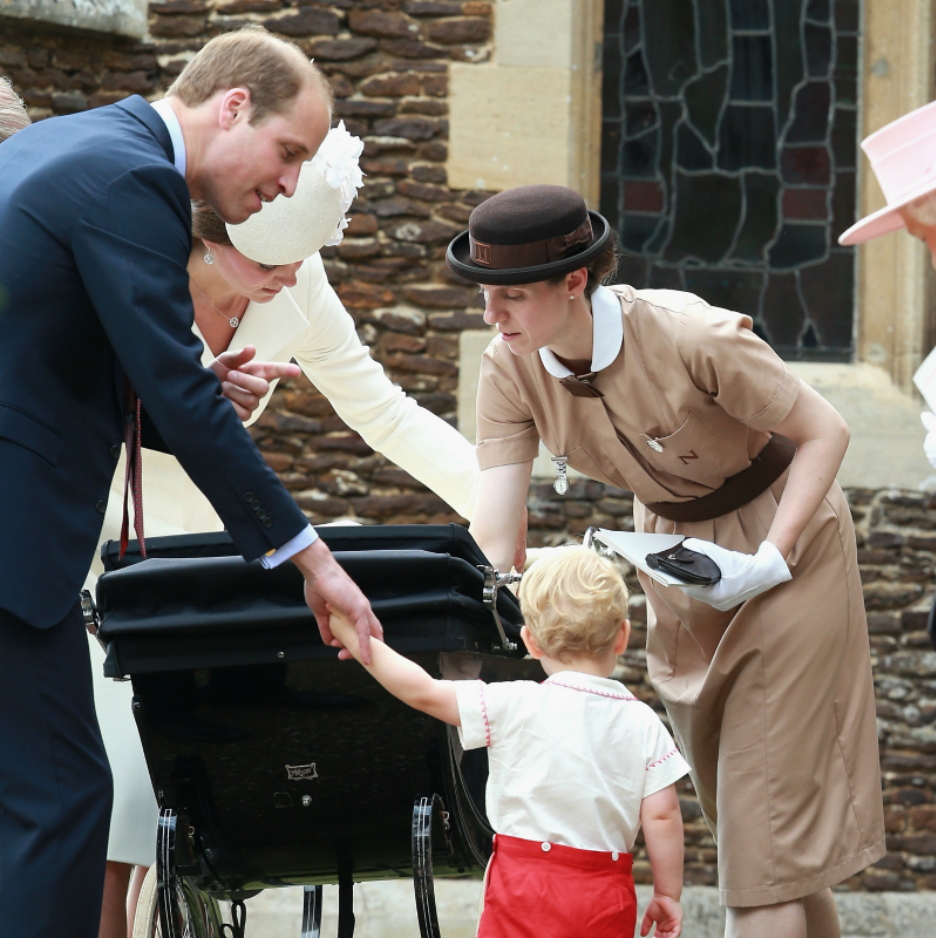 You can expect Nanny Maria will be helping out in the background at Prince Louis’ christening, and most likely in the same traditional attire.

So far, we’ve only ever seen Prince Louis twice. On his April 23rd arrival, his proud parents debuted their son on the steps of St. Mary’s hospital. And just a few weeks later, they released a beautiful set of new photos featuring Prince Louis and his big sister to celebrate Princess Charlotte’s third birthday and to thank fans for their support following their son’s birth. But we’re still yet to see all five members of the Cambridge clan pose for an official family photo — until now.

Royal christenings are the perfect excuse to rally the troops and get a new happy snap and we’re expecting there’ll be a flurry of new shots, including a big group photo with The Queen, Prince Philip, and Prince Charles, and a photo with Kate, William, George, Charlotte, and Louis. We don’t yet know which photographer will take the photos , but it definitely won’t be the disgraced fashion photographer Mario Testino, who captured the official photos at Princess Charlotte’s christening. For their Christmas card, Chris Jackson was the man behind the lense, so maybe they’ll turn to their trusted royal photographer yet again.

7. A Number of Godparents

The royals just love a long list of godparents and traditionally they stick to good friends over dignitaries or close relatives who are already aunts and uncles through blood. Princess Charlotte has five godparents, with Sophie Carter, James Meade, Adam Middleton, Laura Fellowes, and Thomas van Straubenzee as her official custodians.

Similarly, in 2013, William and Kate selected seven people to take on the role as godparents for their first-born son. Among them were friends of the couple Oliver Baker and Emilia Jardine-Paterson as well as Earl Grosvenor, Jamie Lowther-Pinkerton, Julia Samuel, and William van Cutsem. Zara Phillips, Prince William’s cousin, was the only member of the royal family to be selected as one of George’s godparents.

One royal expert is predicting William’s cousins Princess Beatrice and Princess Eugenie might get the call up. “It is possible Beatrice or Eugenie might be a godparent to the new baby,” royal commentator Richard Fitzwilliam told The Express. Others think Meghan Markle will be asked.

According to Woman’s Day‘s palace source, Kate was adamant about her future sister-in-law to playing the important role of godmother. “They’ve already formed a strong sisterly bond, and it’s Kate’s way of showing how close they’ve become,” the insider told the publication.

This article was originally written by Bella Brennan. For more, check out our sister site, Now to Love.

Carole Middleton Hints About What to Expect at Prince Louis’ Christening