If you’re thinking Princess Eugenie’s new engagement ring from Jack Brooksbank looks a little familiar, you’re not wrong — the rock is very similar to Eugenie’s mother Sarah Ferguson, the Duchess of York’s engagement ring! Back in March 1986, Sarah and Prince Andrew announced their engagement to the world after Andrew presented his fiancée with a stunning pink Burma ruby surrounded by diamonds. Then, more than 30 years later, Sarah and Andrew’s youngest daughter received a similar, pink-orange padparadscha sapphire ring surrounded by diamonds from Jack.

According to the Daily Mail, Eugenie’s “lotus blossom” bauble is worth a “relatively modest” price of around $9,770. In comparison, Sarah’s ring — which was created by Princess Diana’s former jewelers, Garrard — cost about $35,000 back in the mid-80s, which is approximately $100,000 today. 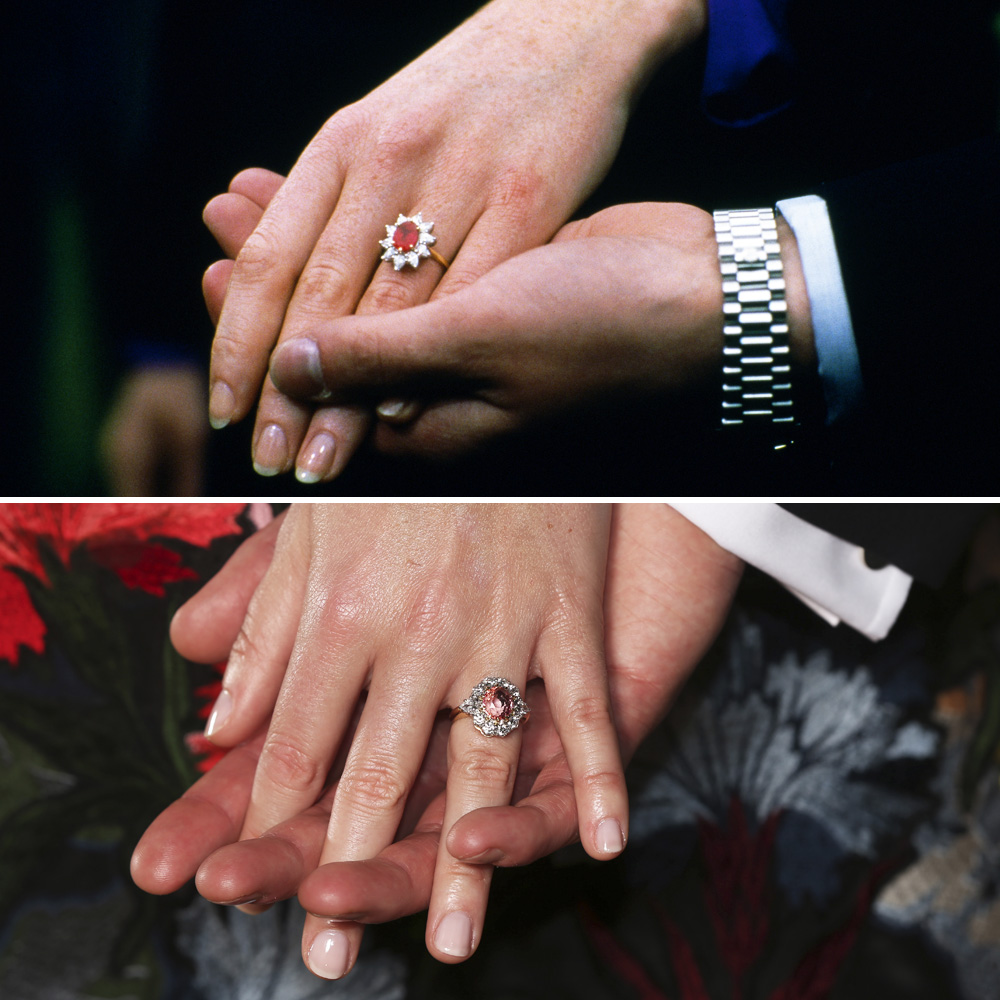 “Princess Eugenie’s ring features an oval cut padparadscha sapphire encircled with a cluster of pear-shaped diamonds. Padparadscha sapphires are typically found in Sri Lanka and are one of the rarest colors of sapphire, being a beautiful and unique mix of pink and orange,” Sophie Lomax, head of design at 77diamonds.com, told the Dail Mail, “The ring style that Jack has chosen Eugenie is reminiscent of the engagement ring Sarah Ferguson was given by Eugenie’s father, Prince Andrew. The ring is a similar but a modern update to her mother’s, with the cluster style being vintage whilst celebrating the center stone.”

Lomax continued, “Colored gems stones in engagement rings are becoming increasingly popular as women like to wear designs, which are more personal to them and their partner. The ring features approximately a 2-carat oval padparadscha with around 1.5 carats of pear-shaped diamonds in the cluster, set onto a yellow gold band.”

Eugenie and Jack — who previously worked as the manager of Mayfair nightclub Mahiki in London — announced their royal engagement on Monday, January 22. “The Duke and Duchess of York are delighted to announce the engagement of Princess Eugenie to Mr. Jack Brooksbank,” a statement from the royal family read. “Her Royal Highness and Mr. Brooksbank became engaged in Nicaragua earlier this month. The wedding will take place in the Autumn of 2018 at St George’s Chapel in Windsor, with further details to be announced in due course.”

The couple’s wedding will take place just a few months after Eugenie’s cousin Prince Harry ties the knot with Meghan Markle at Windsor Castle in May 2018. We’re so excited to have another royal wedding in the works — congratulations to Eugenie and Jack on their engagement!