Anyone who will stay glued to the TV on May 19, 2018, for Prince Harry and Meghan Markle’s wedding can thank Queen Elizabeth’s late younger sister, Princess Margaret — her May 1960 wedding to Antony Armstrong-Jones was the first royal wedding to be televised, and what a wedding it was!

Margaret and Antony’s engagement took the press by surprise since she had kept her romance with the fashion photographer a closely-guarded secret. Their highly-publicized wedding took place at Westminster Abbey on May 6, 1960, with a reported TV audience of 300 million. Winston Churchill attended in person, as did Antony’s mother, his two stepmothers, and even one of his exes, according to Vanity Fair.

Not invited to the wedding, biographer Ann de Courcy has revealed, were any of the staff members from Clarence House. Apparently, Margaret hadn’t been kind to them as she grew up there. When she left for Westminster Abbey on her wedding day, household comptroller Lord Adam Gordon reportedly said, “Good-bye, Your Royal Highness… and we hope forever.” 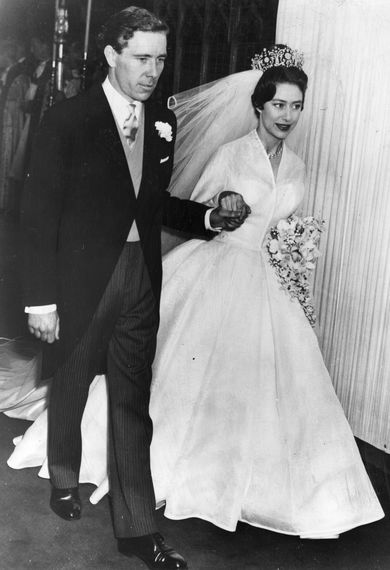 For the special occasion, Margaret wore an organza-and-tulle wedding dress — ostensibly designed by Norman Hartnell, though de Courcy claims Antony and one of his friends should actually get most of the credit — along with a Poltimore tiara featuring diamond leaves and flowers. The groom, meanwhile, wore a coat crafted by the same tailors who dressed him when he was a schoolboy. Prince Philip, Margaret’s brother-in-law, walked the bride down the Westminster Abbey aisle as 2,000 guests looked on. (For your reference, roughly the same number of guests attended Queen Elizabeth’s and Prince William’s respective weddings.)

Margaret’s eight bridesmaids included her niece, Princess Anne, her goddaughter, Marilyn Willis, and other family members. Margaret was a bridesmaid at Queen Elizabeth’s wedding 13 years prior, but Elizabeth wasn’t a bridesmaid at Margaret’s. That decision was likely for the same reason Kate Middleton won’t be in Meghan’s wedding party — queens and queen consorts don’t usually serve as “attending persons” to other brides.

At the wedding breakfast afterward, Prince Philip made a speech welcoming Antony into the royal family before the newlyweds cut a six-foot wedding cake. Then, the happy couple drove in an open-topped Rolls Royce to the pier where the royal yacht, Britannia, was waiting to whisk them away for a six-week honeymoon cruise in the Caribbean. After the honeymoon, Antony and Margaret moved into Kensington Palace, and he became the Earl of Snowdon. Antony and Margaret’s love story wouldn’t last, however. They divorced in 1978, as we’ll see soon on the Netflix drama The Crown.

“We’re now writing Season 3,” creator Peter Morgan told Town & Country earlier this month. “And in Season 3, without giving anything away — it’s on the record, it’s history — we’ll see the breakup of this extraordinary marriage between Margaret and Snowdon.” We can’t wait to watch!