With two royal weddings set to take place this year, people are more obsessed with royal engagement rings than ever before! Back in November 2010, Kate Middleton began the domino of engagements within the British monarchy’s younger generation when the family publicly announced that Prince William had proposed. Just a month later, Princess Anne’s daughter Zara Tindall became engaged to Mike Tindall in December 2010. Kate’s sister Pippa Middleton was next to get engaged to James Matthews in July 2016. Then, in November 2017, Prince Harry popped the question to American actress Meghan Markle and, two months later, Prince Andrew’s daughter Princess Eugenie became engaged to Jack Brooksbank.

So, with all these royal proposals, what do Kate, Meghan, Eugenie, Pippa, and Zara’s engagement rings all look like? In a new interview, Closer Weekly exclusively spoke to Kathryn Money, Vice President of Strategy and Merchandising at Brilliant Earth, about the five ladies’ stunning rocks — scroll down to find out how unique the rings are, their carat size, cost, and more! 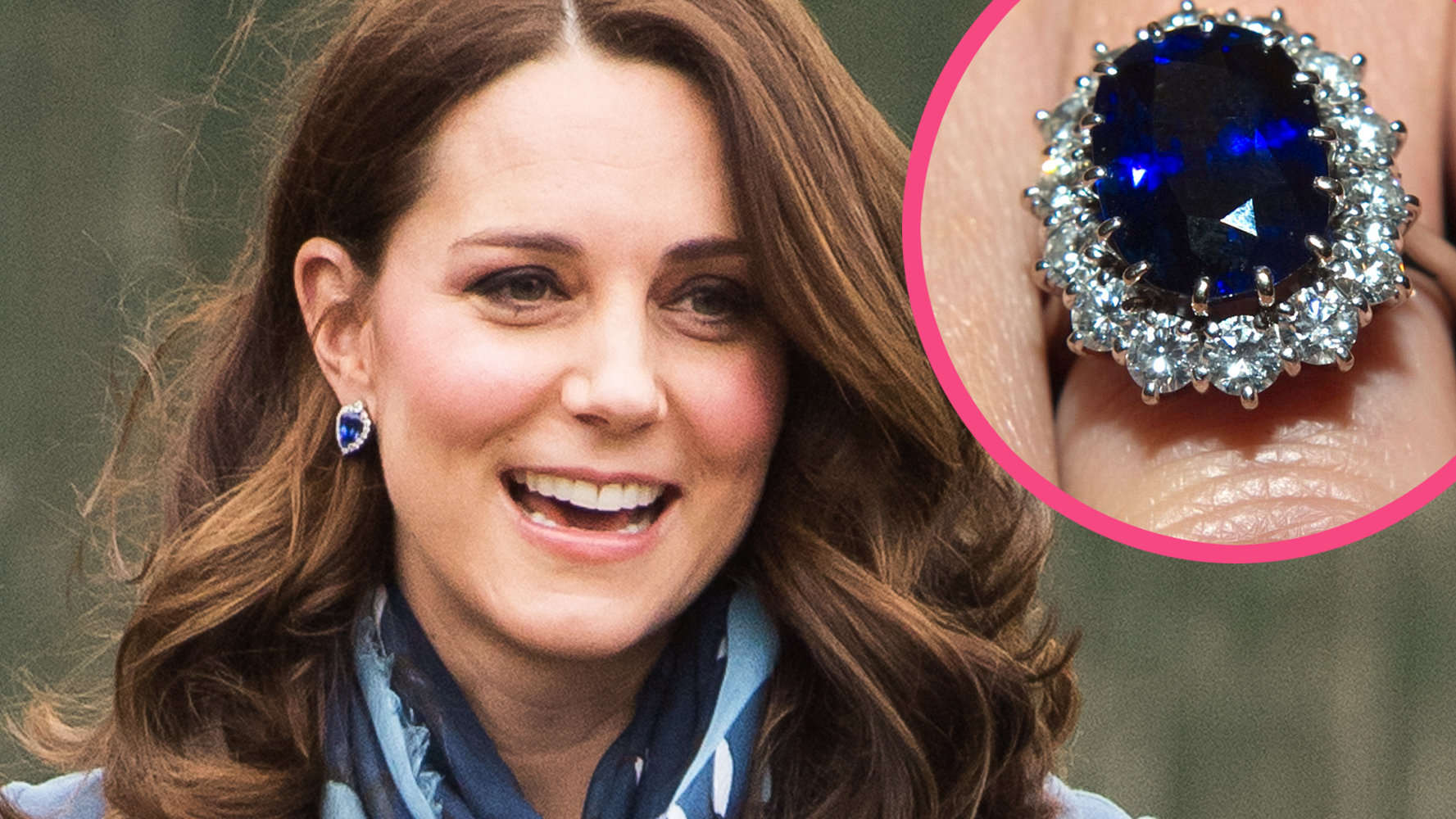 Kate Middleton’s gorgeous engagement ring features a deep blue sapphire surrounded by a halo of diamond accents set on a platinum band, which perfectly fits her timeless, sophisticated, and chic style. In terms of trendiness, Kate’s engagement ring actually caused a resurgence in the popularity of colored gemstone engagement rings. The irony in this “trend,” however, is that engagement rings with vibrantly colored gems have been in vogue among European royal families for generations — backed up by the fact that the ring was originally selected by Princess Diana in 1981, shortly after accepting Prince Charles’ proposal.

We estimate that her ring includes approximately 14 round diamonds surrounding an approximate 12-carat oval blue sapphire set in white gold. Given the provenance and historical significance of this ring, it is priceless and virtually impossible for us to provide an accurate value estimate. 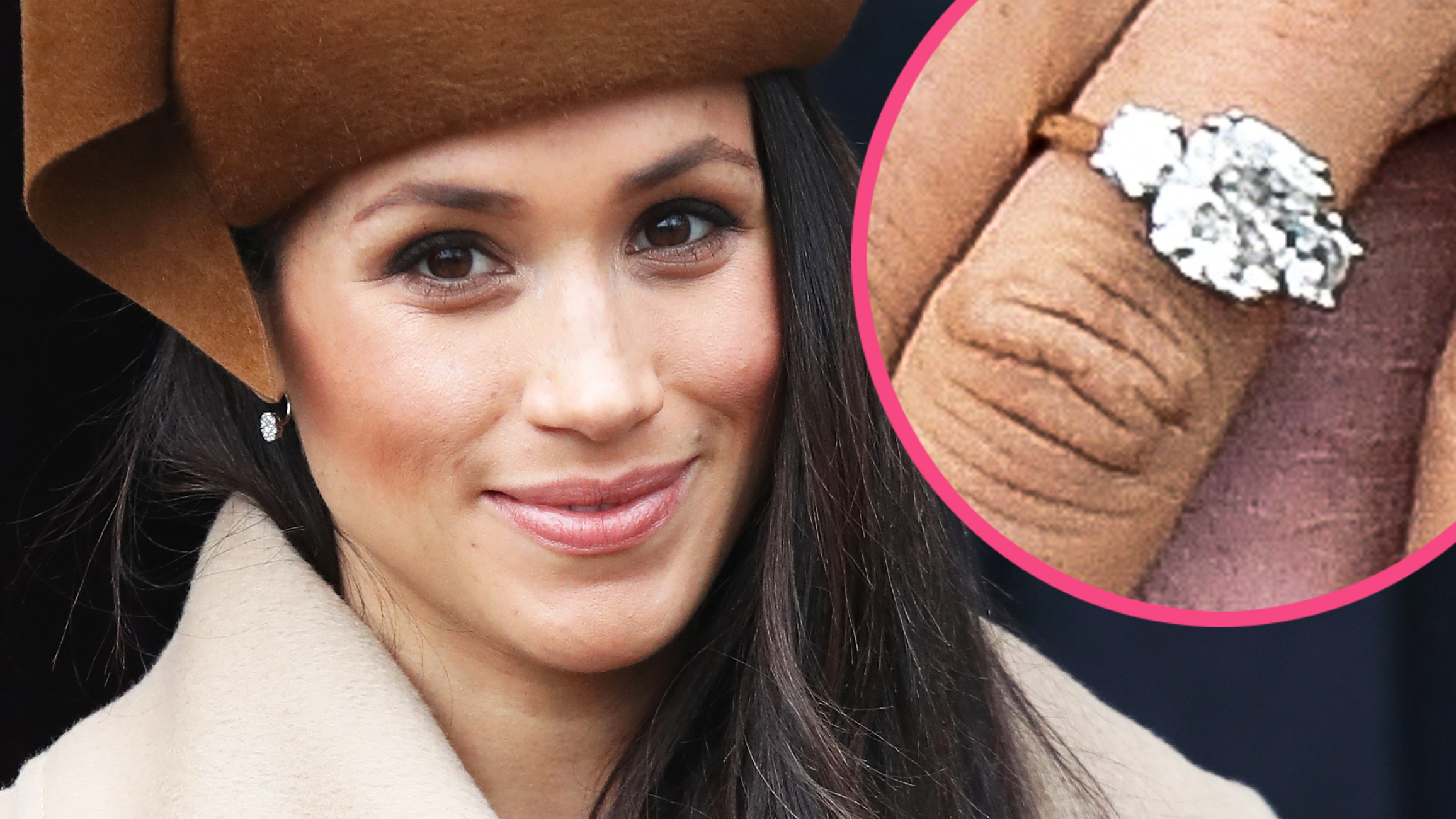 Prince Harry custom designed Meghan Markle’s gorgeous ring featuring a center cushion cut diamond framed by two round diamonds from Princess Diana’s personal collection. The stones are set on a timeless yellow gold band, befitting for a princess, and perfectly match Meghan’s chic yet relaxed style. Another attribute that sets Meghan’s ring apart is that the center diamond is from Botswana, reflecting Harry and Meghan’s shared commitment to social and environmental responsibility. Botswana diamond mining has contributed to transforming Botswana into one of Africa’s most prosperous countries, and Botswana diamond mines are dedicated to minimizing their environmental footprint.

We also love the combination of old and new, with the two diamonds from Diana’s personal collection reflecting a connection to family and tradition, and the diamond from Botswana that represents the new connection between Harry and Meghan. We estimate that the center stone is close to five carats, framed by two diamonds that are roughly three-fourths of a carat each.

Our estimated cost to replicate the look of this ring would be upwards of $120,000, assuming a five-carat cushion cut center diamond with rare, high-quality characteristics. However, given the use of royal heirlooms by incorporating Diana’s diamonds, this ring is truly priceless with unmatched cultural significance. 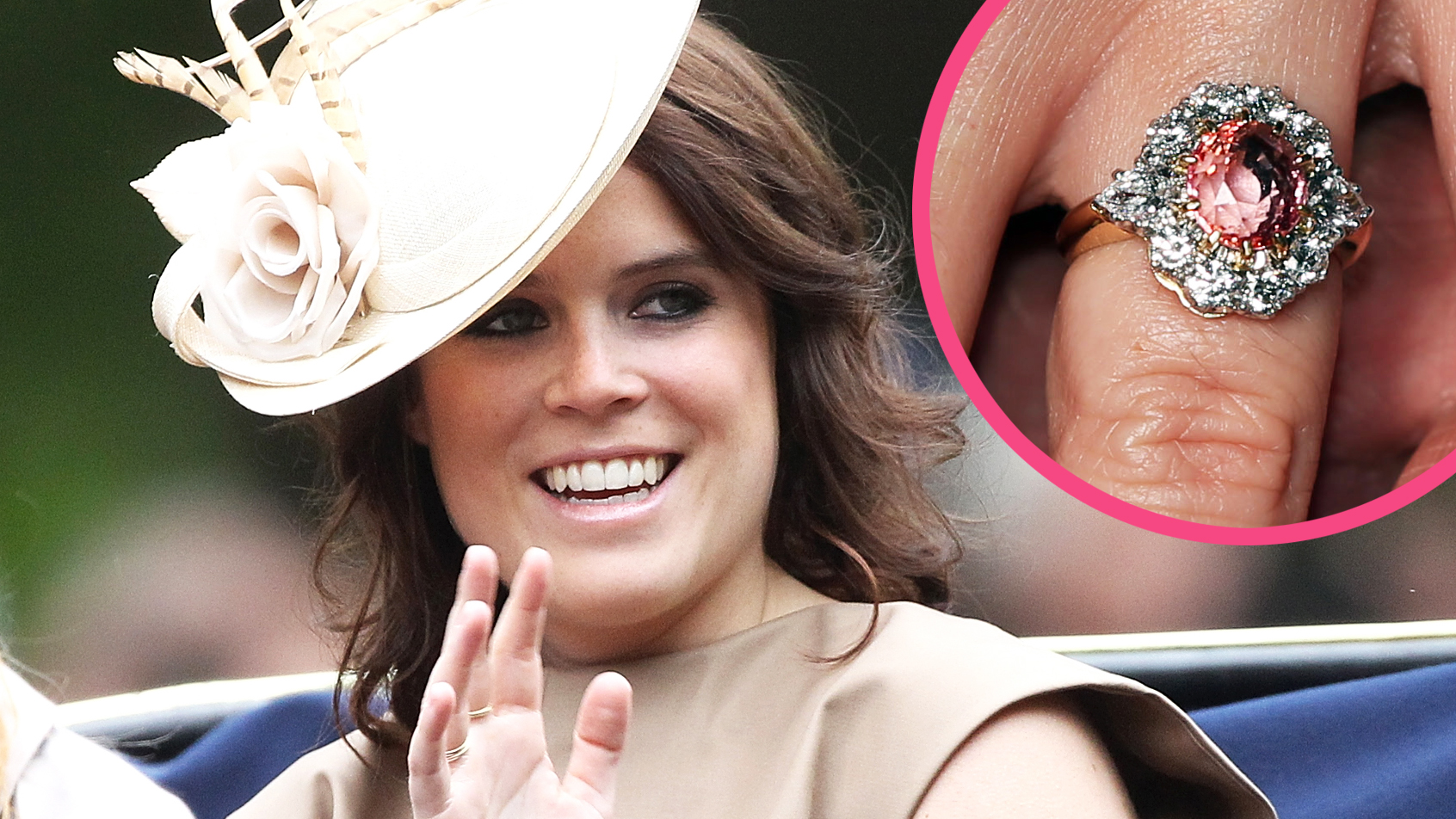 Princess Eugenie’s engagement ring features what appears to be an oval brilliant Padparadscha sapphire. This gorgeous gemstone — which is unique and rare due to its pinkish-orange color — is showcased in a mixed metal white and yellow gold setting with a distinctive vintage-inspired halo of pear and round brilliant diamonds. Eugenie’s ring is a beautiful reflection of the general trend we are seeing in the marketplace for brides to opt for rings that express their unique personality and individual tastes.

In particular, her gorgeous ring incorporates a number of stylistic elements that have become increasingly popular among today’s brides, including a colored gemstone in lieu of a center diamond, settings with distinctive halos or mixed metal, and flattering oval-shaped center gemstones. She has even incorporated the on-trend “millennial pink” hue!

We estimate that the center gemstone is a 10 by eight millimeter (or approximately three-carat) oval brilliant Padparadscha sapphire, surrounded by pear and round diamonds of approximately two and a half to three carats total diamond carat weight. Our estimated cost of the ring is approximately $30,000 to $50,000, depending on the quality and specific characteristics of the gemstone. 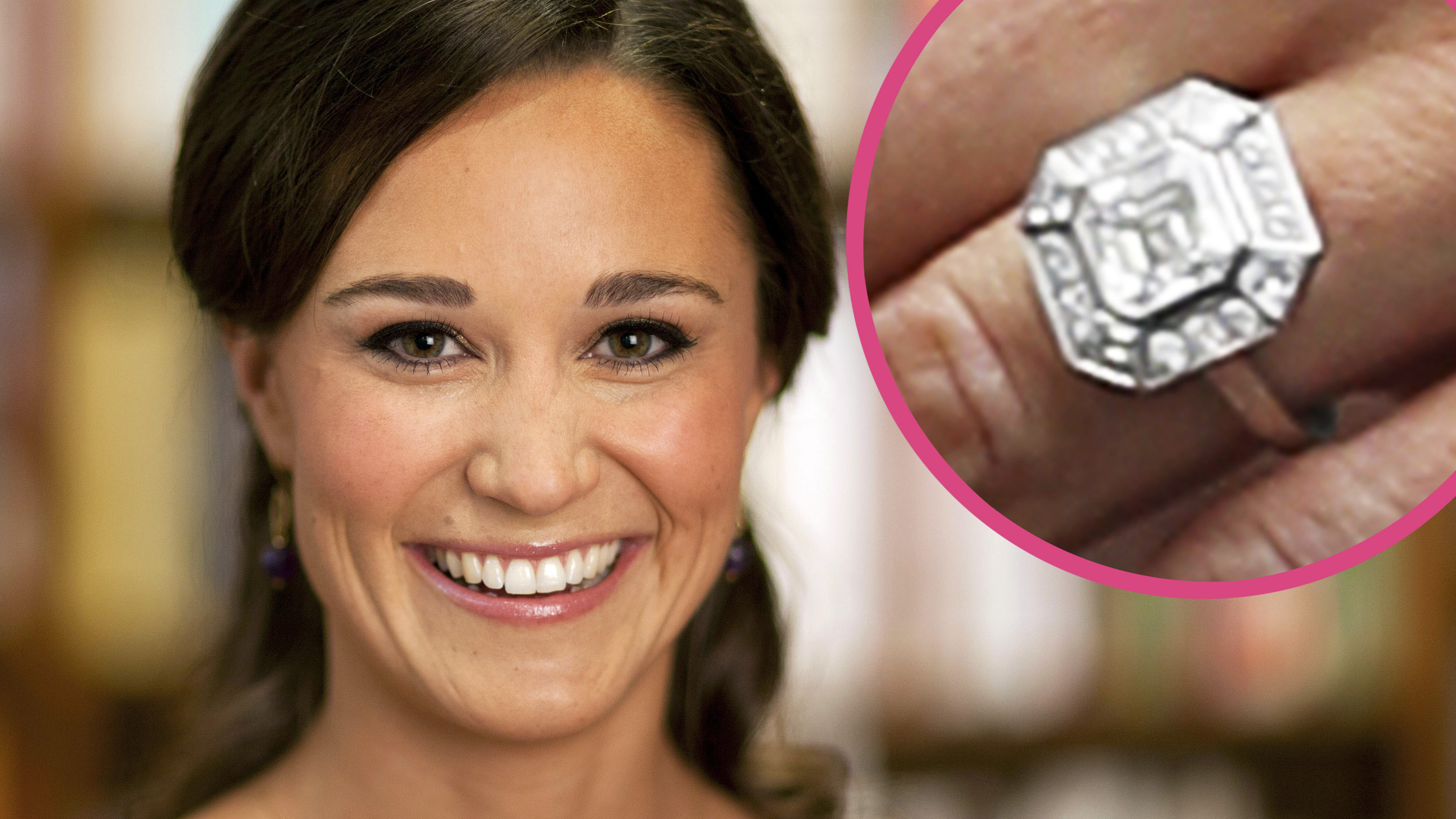 Pippa Middleton’s engagement ring features a vintage-inspired halo design with a distinct art deco feel. The ring highlights an Asscher cut diamond in a bezel setting, which is surrounded by an octagonal halo of sparkling round diamonds. This ring is strikingly different from her sister, Kate Middleton’s, but fits very well with Pippa’s more modern sense of style that will likely stay on trend for many years to come. We estimate that the center stone of the ring is approximately three and a half carats in size. We estimate the ring to be worth approximately $75,000 to $90,000. 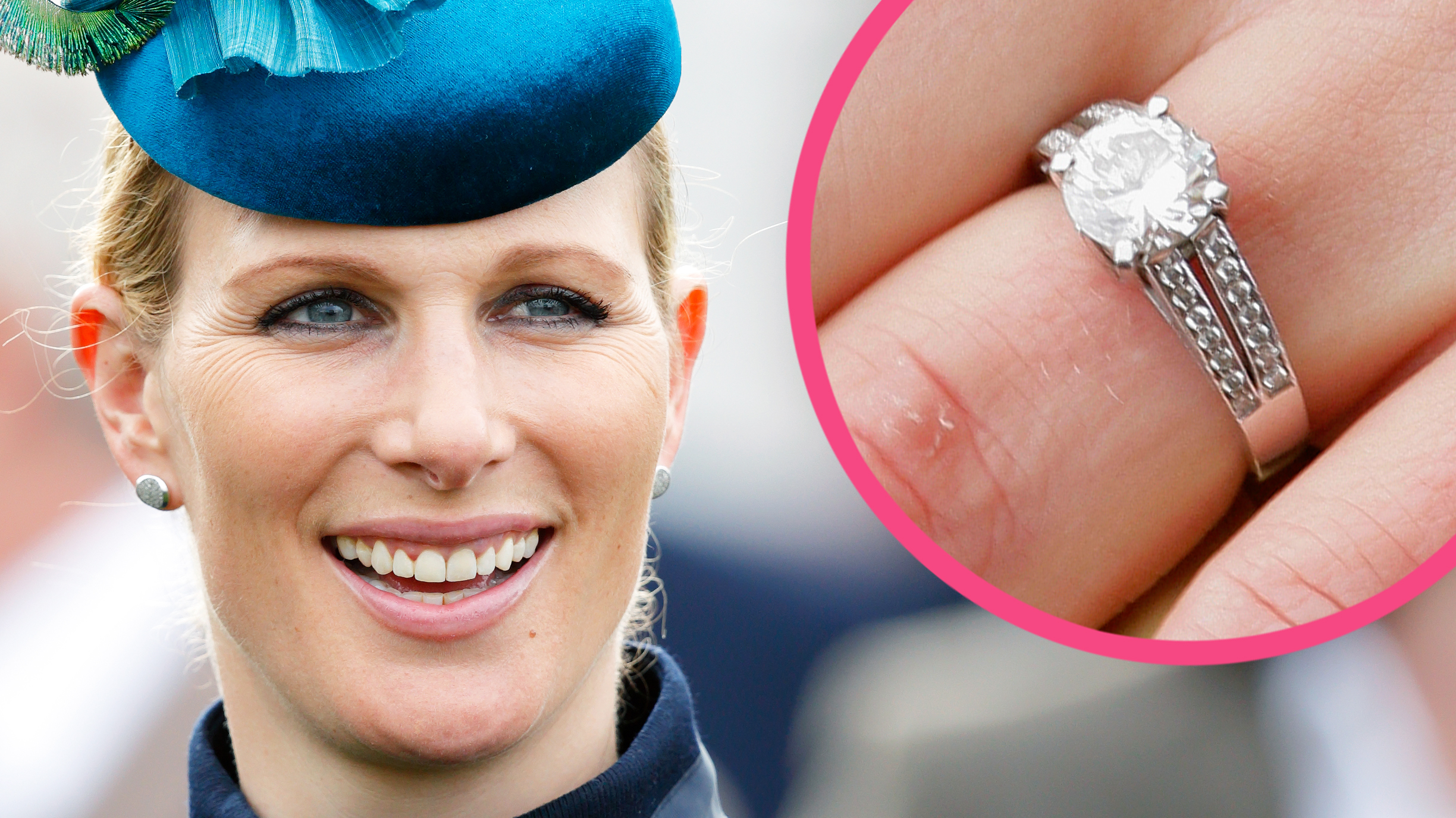 Zara Tindall’s sparkling stunner features a round brilliant diamond set on a diamond adorned split shank double band. What makes this ring unique is that Zara’s now-husband, Mike Tindall, decided to design this ring on his own, rather than choosing a family heirloom. We estimate the center diamond at two or two and a half carats. The value of this ring will vary dramatically depending on the quality and rarity characteristics of the diamond. We estimate the ring is valued at approximately $50,000 but could range from $40,000 to $90,000, depending on the characteristics of the diamond.

Prince Harry and Meghan Markle’s Wedding — See Everything You Need to Know About the Royal Nuptials!