In those moments when things get tough, or it’s feeling like the bottom is falling out of the day, it starts to kick in. The knowledge that, for a while, I can make it all go away. So easily. Oh, sure, I’ll resist, but once it starts gnawing away at my mind, I realize that resistance is futile. In fact, without even being aware of it, I’m actually seeking it out. That sweet instrument of peace. So quick and easy. And before I know it, I’m making it happen. Seconds later, it’s done. The world before me melts away as I balance the remote in the palm of my hand, feeling myself slipping into The Beatles Channel on SiriusXM. I’ve taken a sad song, and made it better.

And not for the first time.

When John, Paul, George, and Ringo invaded America in 1964, I wasn’t even four. Throughout the ’60s I was certainly aware of The Beatles, and watched with amusement as my friends freaked out over them, some of them even being inspired enough to pick up guitars. “What a bunch of nerds,” I thought, as I adjusted the towel around my neck that was serving as a Superman cape while watching Star Trek. 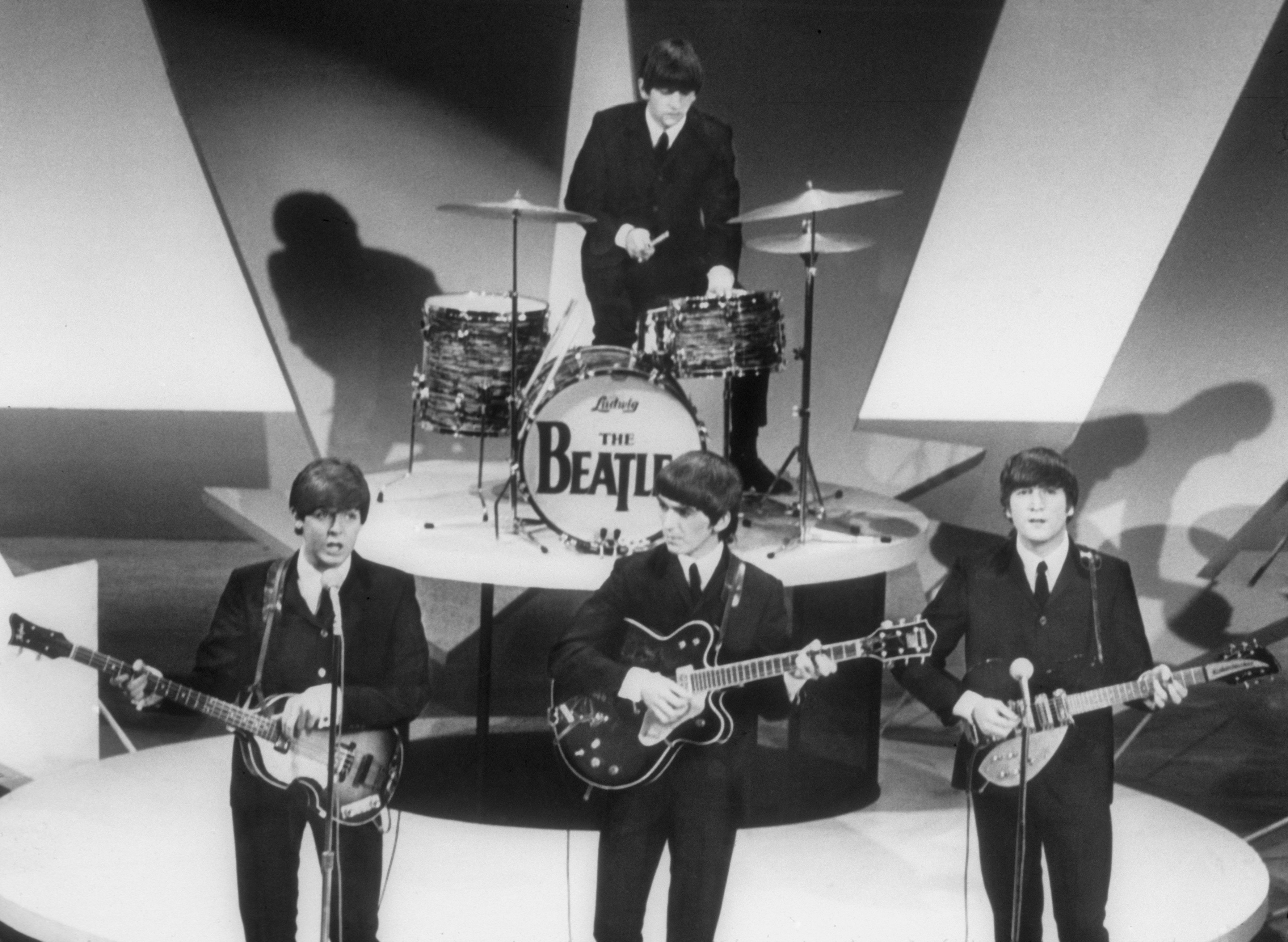 Yep, I pretty much avoided the whole thing. Forget Sgt. Pepper, pass the salt. When Paul sang, “Let It Be,” I wondered why no one would let it. I was pretty much oblivious to the whole thing — until June 1976. That month, Capitol Records released a double-album (back in the days before everything was digital) called Rock ‘n’ Roll Music, which consisted of The Beatles’ original rockers and cover songs. In addition, the single released from the album, “Got to Get You Into My Life,” began climbing up the charts, ultimately reaching number seven. What it was also doing was taking me along for the ride. There was just something about that song that blew my 16-year-old mind. Out of curiosity, I picked up the album and lowered the needle of my stereo onto the vinyl, unaware that my life was about to change forever.

It began with “Twist and Shout” and ended with “Get Back,” with 26 songs in between. That was a total of 28 tracks by a band that had broken up six years prior, but whose music was back on the charts and certainly in my mind. I needed more, and, fortuitously, I happened to work at a gas station at the time, where there was a guy, whose name has long since faded, that would come in, pop open his trunk and have a variety of things to sell, from records to speakers. Amongst it all was the album Let It Be, which I immediately purchased. While far from their greatest, it was nonetheless a Beatles album and I devoured it as I had Rock ‘n’ Roll Music. On the weekends, my friends and I would take the bus to a town not too far away to catch a Saturday afternoon flick, but with my encouragement we made our way to the nearby record store as well. Every week or two I would pick up another Beatles album, in between hitting the library and starting to read biographies of the band. 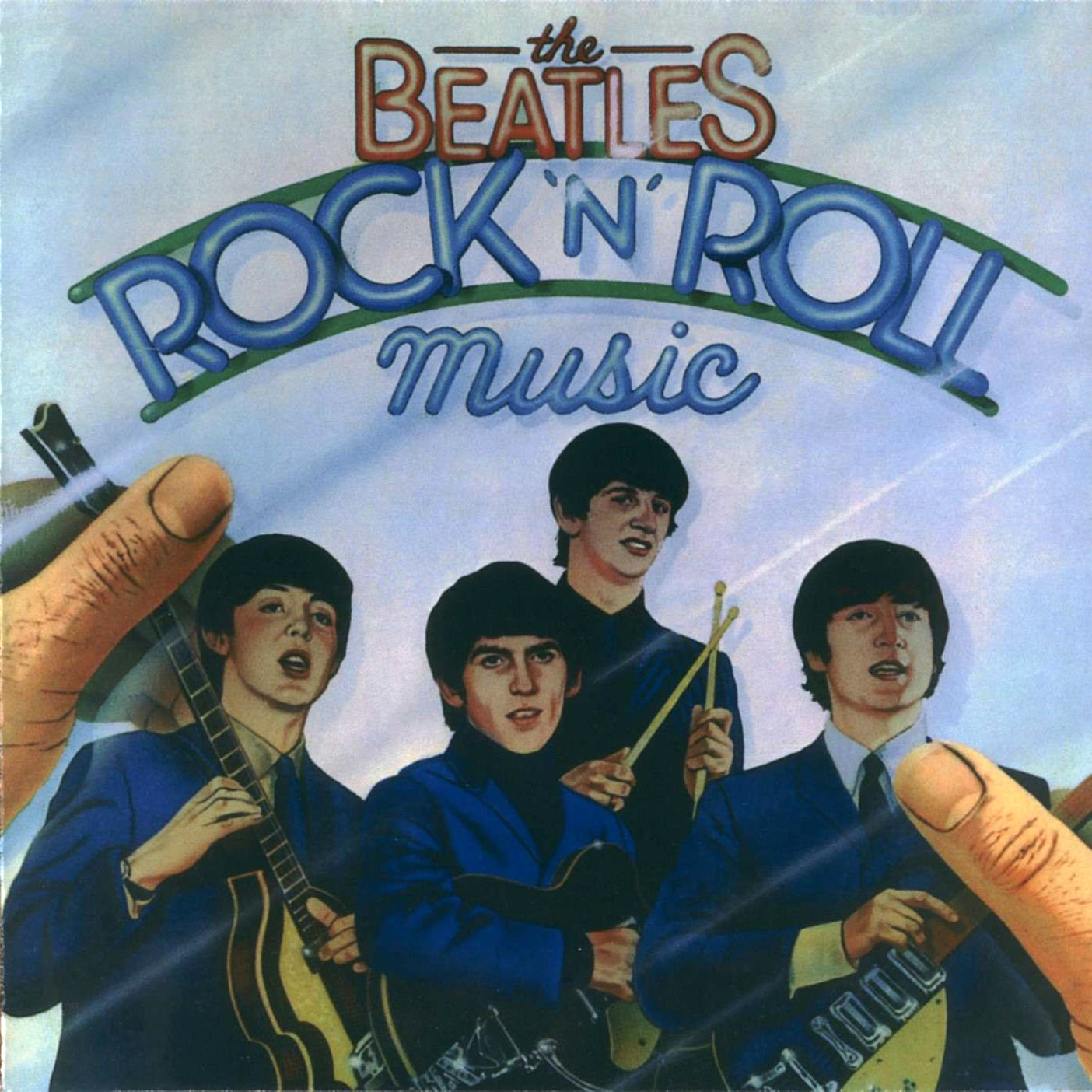 Flash forward a couple of years and I’m in college, beginning the road to journalism, but still willing to talk Beatles (sometimes imitating their voices… I’m not proud) to anyone willing to engage me in conversation on the subject. There were quite a few, surprisingly. One afternoon, a guy reached into his bag and pulled out a Beatles album he had picked up during lunch at a nearby store, but it didn’t look like any of the albums I had in my collection. I quietly freaked out. I was fairly obsessed. How did I miss this one? But as I began reading the track line-up, with songs like “Soldier of Love” and “Memphis,” he explained that this was a bootleg. A recording made from studio or live tapes that had never been officially released, but had managed to work their way into the hands of collectors. And, he said, there were a lot of them. As bad as I had been, things were about to get worse.

Now I’ve never been one of those people who collected memorabilia; someone who had to have anything with a Beatles image or logo on it. My obsession was limited strictly to the music, though not, like other people I had come to know, to the point of having different pressings of the same albums from different countries. No, what I was interested in was music that I didn’t have. Songs that hadn’t actually been released. So I went in pursuit of them and spent the next few years buying them whenever I could, and I would listen to all of it endlessly.

As a teen — and it’s no great revelation here, I’m sure, for a lot of people — in many instances I felt like I just didn’t fit in with many people outside my small circle. I wondered if I’d ever find a girlfriend (and I did. I even found a wife some years later, and together we found some kids, so it all worked out) or really connect with other people. Now I’ve never been much of a drinker or had an overwhelming need to ever do drugs to escape life, but what I did find was that no matter how much angst I was feeling, the music of The Beatles was somehow able to lift so much of the burden. They were an escape. 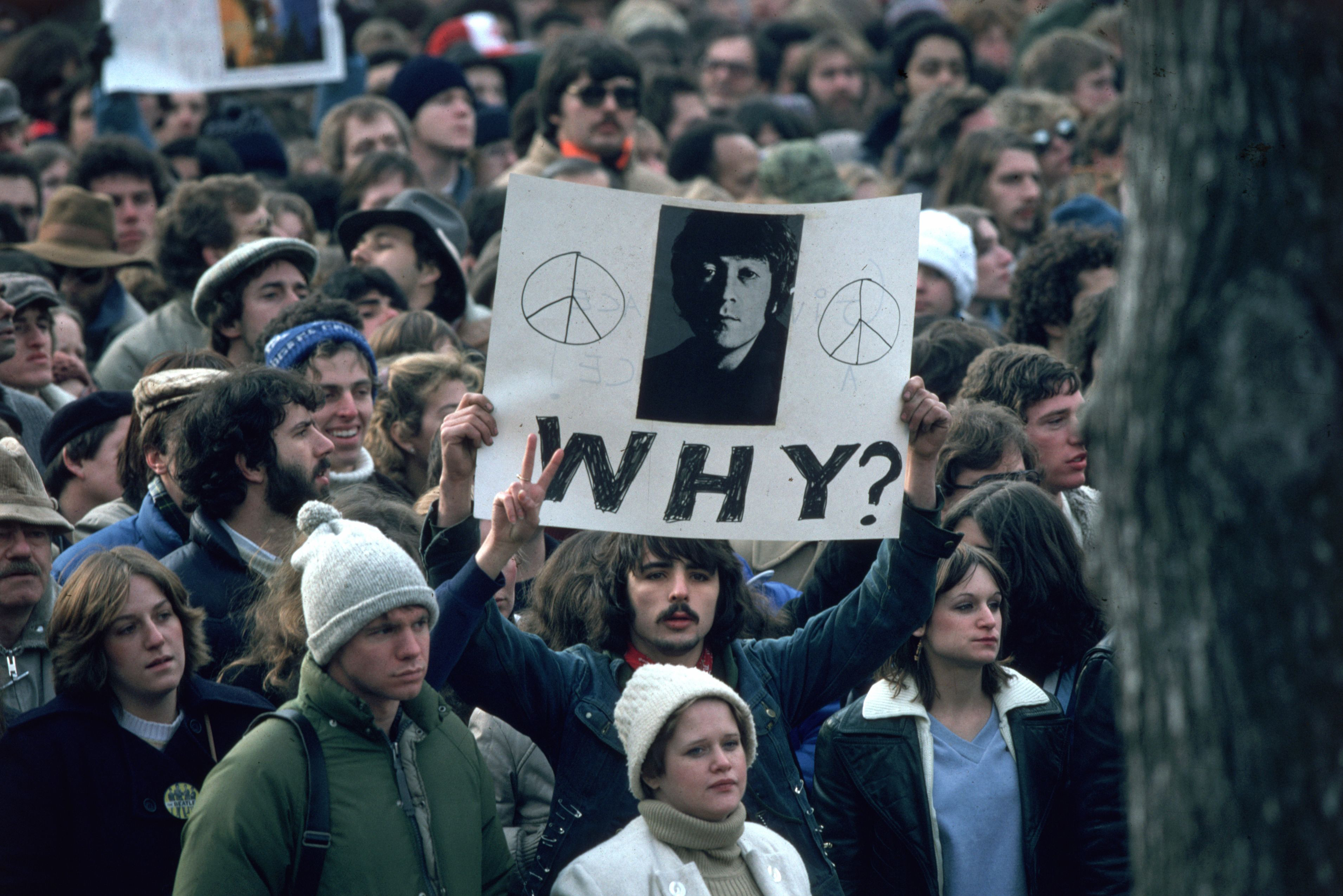 By the mid 1980s, I’d entered the work force (first as a clerk and then a PR guy at United Artists Theatres). At the same time, I began freelancing articles about film/TV (my true passion, though you’d never know it from this piece). I’d gotten the whole Beatles thing a bit more under control, until the CD boom happened. Not only was the Beatles’ catalog issued in that format, but I started reading newspaper articles about hole-in-the-wall record shops that were now selling CDs of Beatles Bootlegs that were actually different from the ones I already had on vinyl. One of those stores was not too far away and I investigated it. Not only did this guy have them, but he had a huge sign that read BEATLES BOOTS, with an arrow pointing down to the bin. I couldn’t believe it. I began making frequent trips to that store, and I can remember debating with myself about how much of my earnings I could afford to spend on this music. As it turns out, not much, but that didn’t stop me, which caused its own set of headaches that I didn’t stop to think about for long. I needed a fix.

Yet as bad as that sounds, the “illness” didn’t kick in the way that it had just a few years earlier. And I think I can trace the reason for that to one day: Dec. 8, 1980. I’m a student at Hofstra University, asleep in the dorm. The phone rings at about 11pm and it turns out to be a friend who I hadn’t spoken to in several years, even though we had been incredibly close at one time. All he asked was, “You heard?” I didn’t know what he was talking about and he told me to turn on the TV. I did, and as the black and white screen lit up (couldn’t afford a color set then), there was an image of John Lennon, with the words “1940-1980” emblazoned before it. He was gone, shot to death. Everything seemed to go dark. 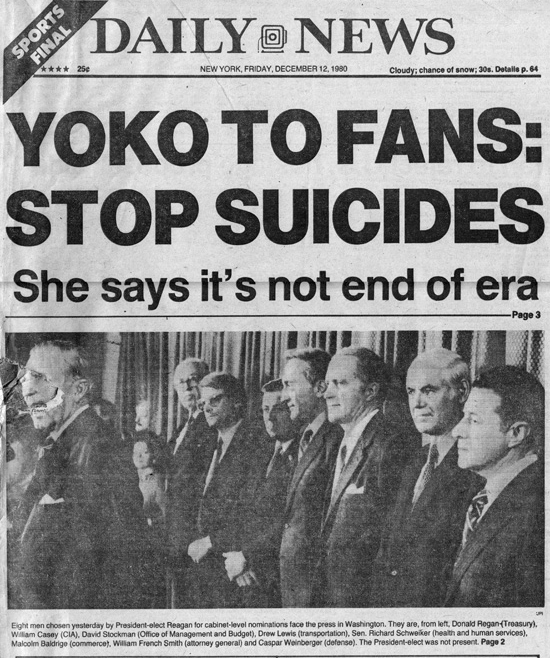 Over the next couple of days, I desperately tried to understand what had happened and, more importantly, why. Now I’m usually fairly upbeat, and have been for most of my life, but I was definitely slipping into a depression. One of my roommates (and not the president of my fan club), derisively looked at me and snorted, “It’s not like you knew him.” My mind could only muster, “Oh yeah??!!,” so it was probably better not to say anything. I instead tried to go to my usual escape, Beatles music, but it only seemed to make things worse. Later that week, a group of us went into Manhattan to stand amongst thousands of other fans outside the Dakota, John’s home. More sadness. That Sunday there was a rally at a nearby park that I couldn’t bring myself to go to. I remember sitting in the common room on the top floor of the dorm, lost in thousands of thoughts, but aware of none of them. And then I saw a New York Daily News headline quoting John’s widow, Yoko One, saying, “Stop the suicides.”

For me, it was like a slap in the face. Not that my depression ever got me anywhere that low, but I was definitely wallowing in it, embracing rather than shaking off the funk and letting it affect my life. And to know that other people’s obsessions over The Beatles were so strong that they would actually end their own lives than face it without someone who — as my roommate had so compassionately pointed out — they didn’t even know, was just something I couldn’t comprehend. At that moment, I pulled myself together, went back to my room and started playing a Beatles disc. And then another. Naturally, they took a very sad song and made it bearable before it got better.