Getting pregnant for the first time is both magical and nerve-wracking in equal measure. When I discovered I was expecting, I was in a constant state of wonder just knowing I had a little life growing inside of me.

When I got to 13 weeks, I had my first scan and went through all the initial tests that are part of being a mom-to-be. Although everything was progressing nicely for my baby, I was told there was a high chance (1 in 78) that my baby would have Down syndrome. For comparison, a 25-year-old woman (similar age to myself when I got pregnant with Lily) has a 1 in 1,200 chance of having a baby with Down syndrome. I was scheduled to have an amniocentesis test at 20 weeks to find out for sure.

Of course, I was a little worried. And it certainly made my first-time mom nerves skyrocket. I didn’t really know what it would mean for my precious cargo. But the doctor told me my baby was healthy, so that’s all I could go on in the weeks leading up to the test.

The amniocentesis test involves doctors withdrawing a small amount of amniotic fluid from the sac surrounding the baby, from which they are then able to learn more, including whether or not a child has Down syndrome. I discovered the sex of my baby then and there — a baby girl. I was over the moon.

A few days later, I got a call from my doctor to let me know my daughter was completely healthy, but she did indeed have Down syndrome. Taking a deep breath, I told myself, “You’ve got this.” I was prepared for the diagnosis. I had been reading up on the condition on the internet; I’d also been reading other moms’ experiences. But hearing the news did make my brain go into overdrive.

You see, there are certain risks that come with having a child with Down syndrome. Congenital heart defects are common, and sometimes their immune systems are weaker than average, so they’re more susceptible to sickness. However, my doctor was very clear in telling us that we had a healthy baby at this stage. She just happened to have Down syndrome.

Unfortunately, I had a very bad experience when I went for my next appointment. My doctor assumed I’d have a termination. He didn’t seem to comprehend that we’d made our decision to keep our little bundle of joy. The doctor actually said to us: “Why have a Down syndrome baby when you can try again for a ‘normal one?'”

My husband Lucas and I discussed it, but there was never any doubt in our minds: We were going to go ahead with my daughter’s birth. Bursting into tears, I was utterly distraught by the whole assumption. I then spoke to a pediatrician who was, thankfully, very informative and completely understood our decision. I couldn’t believe someone would recommend a termination just because my baby had Down syndrome.

My close friends and family couldn’t have been more supportive. Obviously, it was a bit of a curveball but, like us, they couldn’t wait to meet her. I didn’t get any negative comments but I could tell some people felt sorry for me — against my will, I hasten to add! I knew there was an old-fashioned view that having a child with Down syndrome was this awful thing.

When I finally cradled my baby in my arms, I couldn’t believe something could be so perfect. We named her Lily, and we were completely and utterly in love. Nine years later, that love could move mountains. Lily is an absolute joy in our lives. She’s the happiest little girl, and I’m in awe of her every single day.

Luckily, Lily’s always been in perfect health and didn’t have anything wrong with her heart, nor has she been more susceptible to sickness. She’s your average cheeky nine-year-old — headstrong, determined, and always ready to push boundaries! She makes friends easier than anyone I know and has the most beautiful and caring nature. She’s a wonderful big sister to my second child Ollie, who came along four years later.

Lily also loves the camera and is always ready for a smile or a pose. She appeared in a Target catalog last year, which I’m really proud of. I think it’s great for companies to show diversity in their campaigns and really challenge stereotypes.

I started a Facebook group for Lily for this reason. I wanted to confront the old-fashioned views on Down syndrome because I feel there is definitely still a stigma attached to the condition. The response has been great and it’s allowed me to connect with other moms who have children with Down syndrome. Lily even has a little friend, Will, who also has Down syndrome. We catch up with him and his mom a lot, and Lily sees him at school, too.

I did receive a negative comment online one day calling me selfish and implying I’d condemned Lily to a life of suffering. But for anyone who knows Lily, this comment is laughable; she has a wonderful life, and my life is so much better with her in it, too.

She’s currently obsessed with reading and dancing and playing with her friends. While I take each day as it comes, I don’t worry about Lily’s future because I know what a determined little girl she is — the world really is her oyster.

I’ve been asked a lot about having a child with Down syndrome over the past few years. And I’ve even been asked about the abortion rates too. They’re estimated to be above 90 percent after a positive Down syndrome test. This is shockingly high.

It’s also much easier to test for Down syndrome now. There’s Non-invasive Prenatal Testing (NIPT), a DNA-based blood test which wasn’t available when I was pregnant with Lily.

I think medical professionals in particular need to be so careful about their language and assumptions when it comes to talking about babies with Down syndrome. I cannot fathom life without my Lily. I still get upset thinking about the doctor trying to organize my termination.

Last year, my sister Bec and I got “the lucky few” tattoo to symbolize the joy of knowing someone with Down syndrome. The lucky few started with a single social media post; it really is so effective in spreading the love. 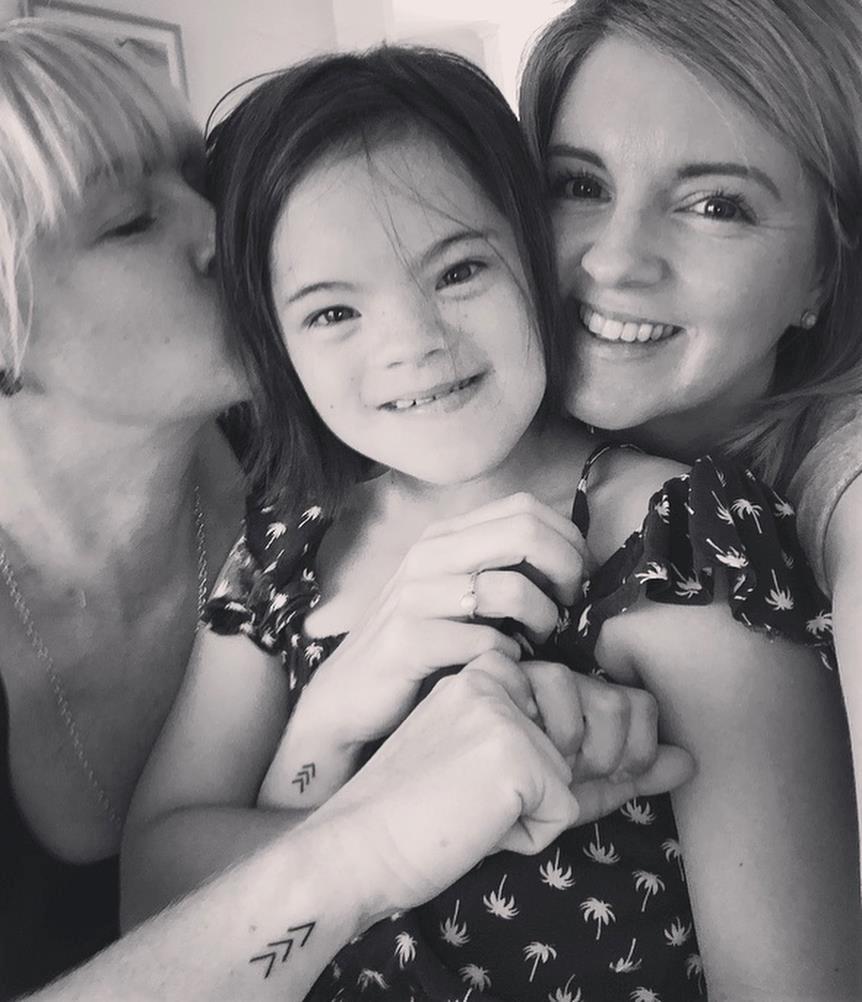 It’s nice to see other people with Down syndrome smashing stigmas too — you can’t help but think of model Madeline Stuart, who has the whole universe behind her right now.

Life with Lily has been so unbelievably rewarding. She really does live in the moment and what you see is what you get. In a way, it’s her who’s teaching me. And I wouldn’t have it any other way.

This post was told to Lorna Gray by Emily McCain. For more, check out our sister site Now to Love.

Meet Lucas, The First-Ever Gerber Baby With Down Syndrome

Passengers Were Angry When a Teen With Down Syndrome Wouldn’t Get In His Airplane Seat. Finally, One Woman Stood Up and Did the Unthinkable