UPDATE (November 27, 2017) — Erin and Abby, the twins who were born conjoined at the head and separated on June 6, are now being discharged from the hospital, according to ABC News.

Erin and Abby were born conjoined at the head, their skulls attached, sharing a single crucial vein that circulates blood between their brains and their hearts. It’s been a tiring, yet hopeful 15 months for the youngsters and their doting parents, Heather and Riley. Heather delivered the twins prematurely via C-section so doctors could begin planning the monumental task of separating these baby girls safely.

According to The Washington Post, on June 6 of this year, it took a team of 30 doctors and nurses, working for 11 hours, to separate connected-at-the-head Abby and Erin.

“The weeks after the girls’ separation were filled with many terrifying moments,” Heather, who’s started a GoFundMe page to raise money for the girls’ ongoing health needs, wrote on her blog. 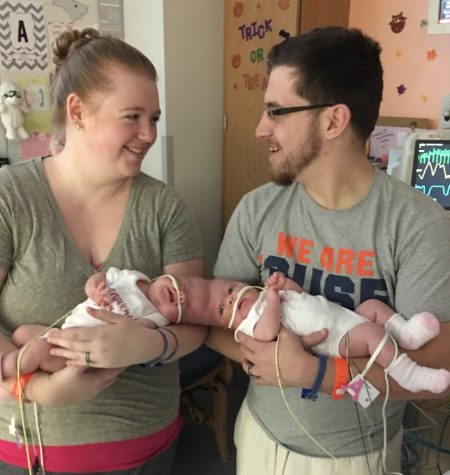 Erin and Abby with their mom and dad, Heather and Riley. (Photo Credit: Now to Love)

“I know that when you see stories of conjoined twins being separated it’s so exciting and everyone is so happy. I wasn’t able to have that moment for a while. When dealing with the brain, things can change in an instant, and because of that I lived at the hospital for the first almost month after the girls were separated.”

Not only that, but the girls have faced health setbacks, with Heather saying “their little bodies are getting colds and sicknesses” since being moved from the ICU to occupational therapy rooms. “Whenever they aren’t in rehab getting their therapies it is a setback as to when we can go home,” Heather continues. “And poor Abby just can’t seem to catch a break. She has had a respiratory virus three times (Erin twice, me once), Erin had the flu (Abby and I escaped that one thank God), and then just this past week Abby got a weird blood infection that caused her to go into septic shock, landing her yet another stay in the ICU.” 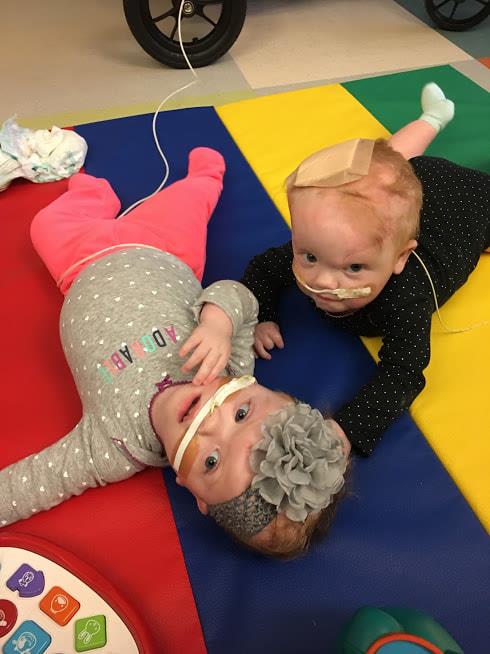 “This last one scared me, I am not going to lie. She was really, really sick for a few days there. She got 2 CTs, an MRI, a bunch of spinal taps, and every type of blood test in the book, and they still don’t know where in her body the infection was coming from or how she picked it up.” Although Erin has been discharged from hospital and can sit up on her own for 10 to 15 seconds, play with her toys, and eat pureed food (even if she stubbornly spits it out occasionally), Abby still needs assistance in hospital. But Heather and Riley are optimistic that she’ll be discharged soon enough.

These Twins Are Gorgeous, But Wait Until You See Them Today Celebrating Their 100th Birthday

Pippa and Kate Middleton Have the Best Sisterly Bond—and These New Photos Prove It!