Struggling through a period of marital turmoil in her 40s, Ruth Graham — daughter of the late Rev. Billy Graham — made the painful decision to leave her husband after just five weeks.

“I fled,” she exclusively recalls to Closer Weekly, “and I started a two-day drive to visit my parents, who’d warned me against the marriage. I was full of shame and regret.”

When she finally pulled into her folks’ driveway after her long, emotional journey, she admits she was expecting some stern words, maybe even a lecture. “But my father was standing there waiting for me,” she reveals.

“When I got out of the car, he just wrapped his arms around me and said, ‘Welcome home.'” Those words changed her life. “He was such an illustration to me of God’s wonderful grace,” Ruth, 67, says of her dad, who died on Feb. 21 at age 99 at his home in Montreat, North Carolina. “He was a force for good,” televangelist Joel Osteen, 55, tells Closer of his eloquent and charismatic mentor, whose ministry spanned more than six decades. 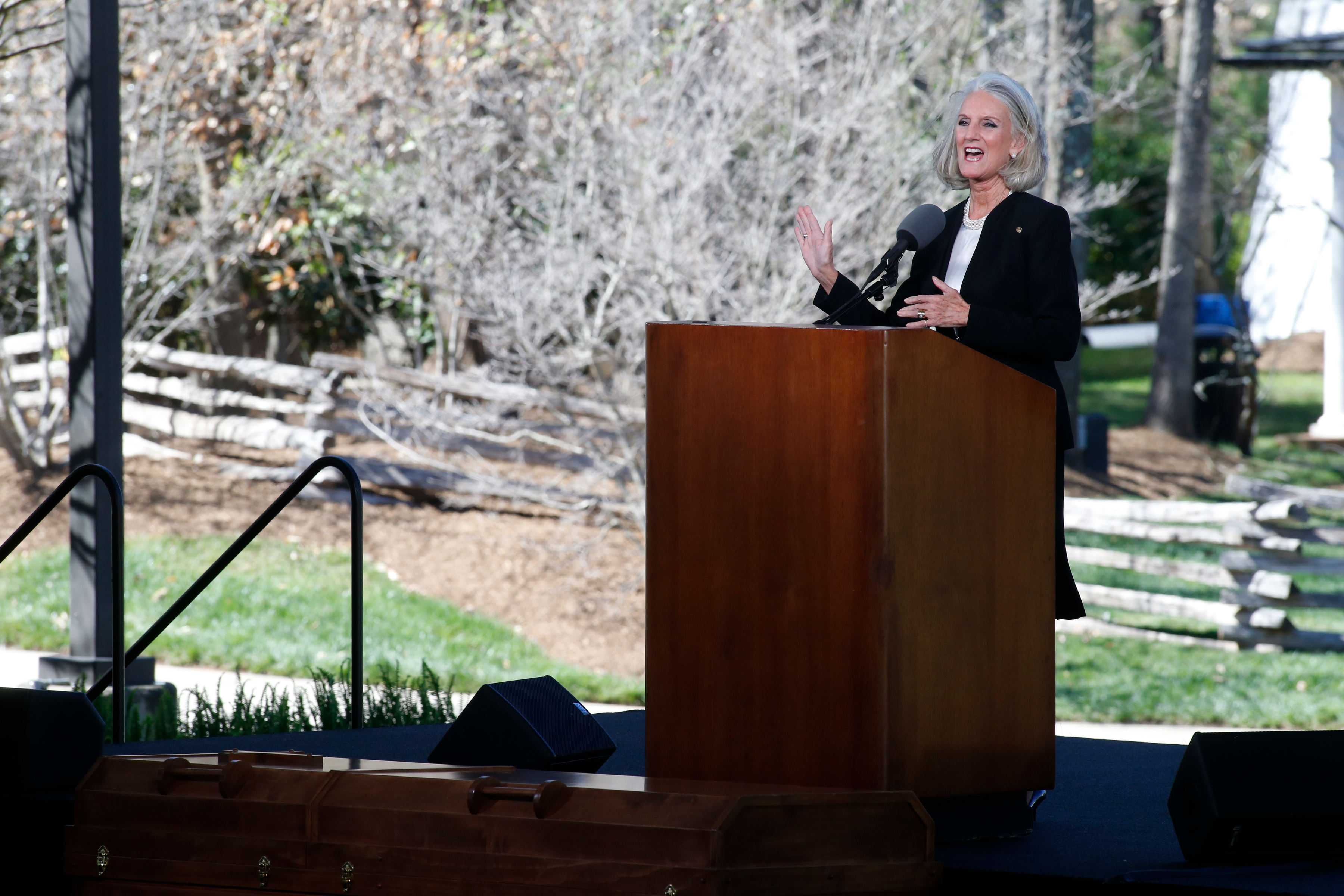 “There are so many people who wouldn’t have received the message of Christ if he hadn’t been a pioneer on radio and television,” Osteen says of the man who preached to more than 200 million people in 185 countries and served as a spiritual counselor to 12 presidents, from Harry S. Truman to Barack Obama.

“Billy’s entire life was lived with integrity, honesty, and kindness. I don’t know of anyone else who can match his influence,” adds Terry Whalin, author of Billy Graham: A Biography of America’s Greatest Evangelist.

Graham made his personal commitment to Christianity at age 15 after he spent his childhood on his family’s farm outside of Charlotte, North Carolina, where he loved to play sports and practical jokes.

“He was going to be a baseball player and when he was a kid he met his idol, Babe Ruth,” Whalin tells Closer. His parents, devout Presbyterians, taught him to pray before every meal and nurtured his love of the Bible. 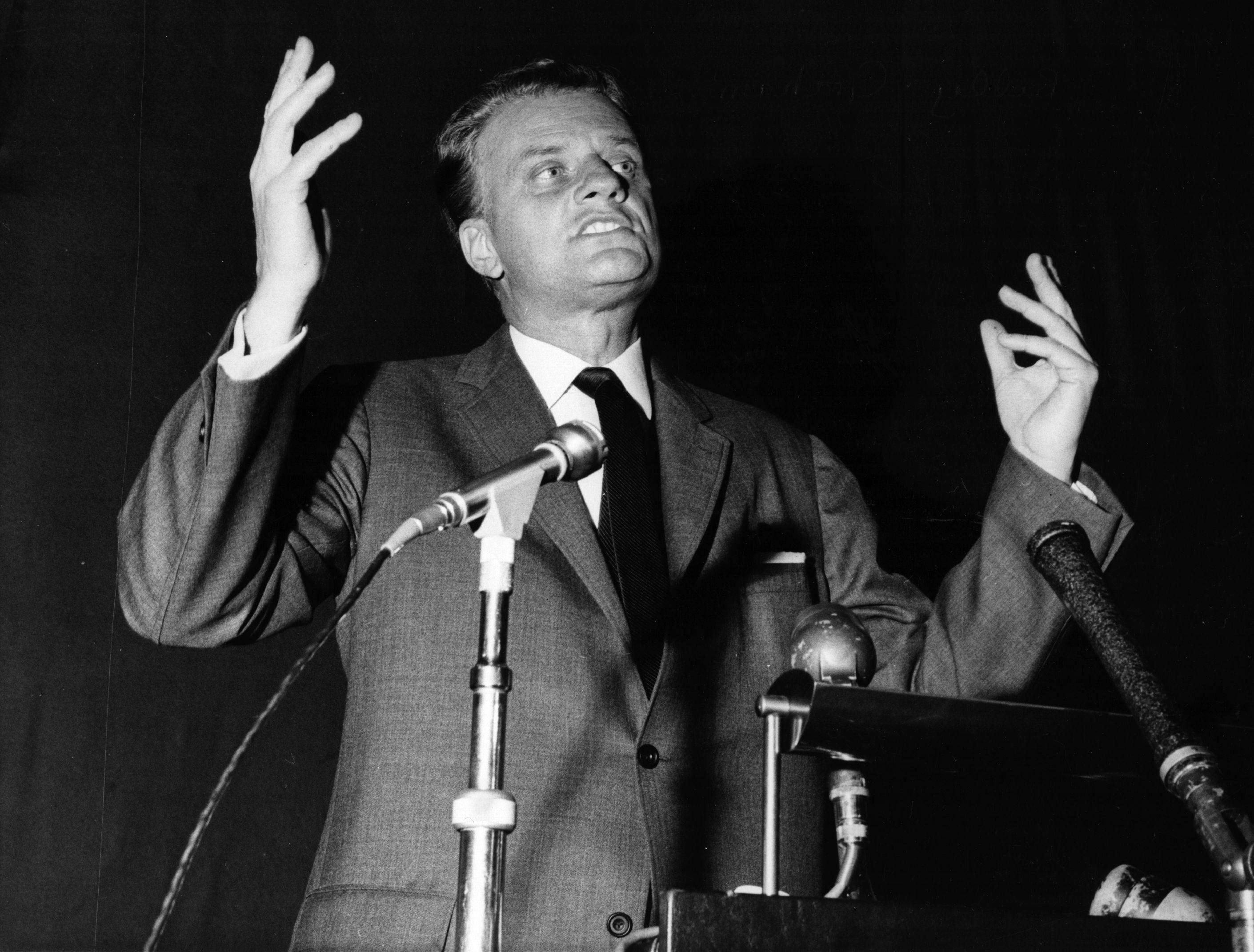 He practiced delivering the sermons of local evangelical preachers in a toolshed, and by 1949, after graduating from Wheaton College in Illinois, and marrying his wife, Ruth Graham (they later also named their daughter Ruth), he led a series of tent campaign revival meetings in Los Angeles. “The Lord Jesus Christ can be received, yours in forgiven, your burdens lifted, your problems solved, by turning your life over to him,” he passionately preached, and his unique and bold delivery captivated those in attendance.

His wife actually thought his booming voice and his sharp-dressed style were too theatrical, but his charm and good looks not only helped him command the stage, but made him a natural for radio and TV. Fame, though, was never his goal.

“It’s just something that developed,” Whalin insists. “His focus was bringing people into a deeper relationship with Jesus Christ.” His impact even reached many national and international leaders. “He met with Dwight Eisenhower during World War II,” Whalin says. “It was to Eisenhower that Billy suggested they start a National Prayer Breakfast [in Washington, DC], a tradition that continues today.” 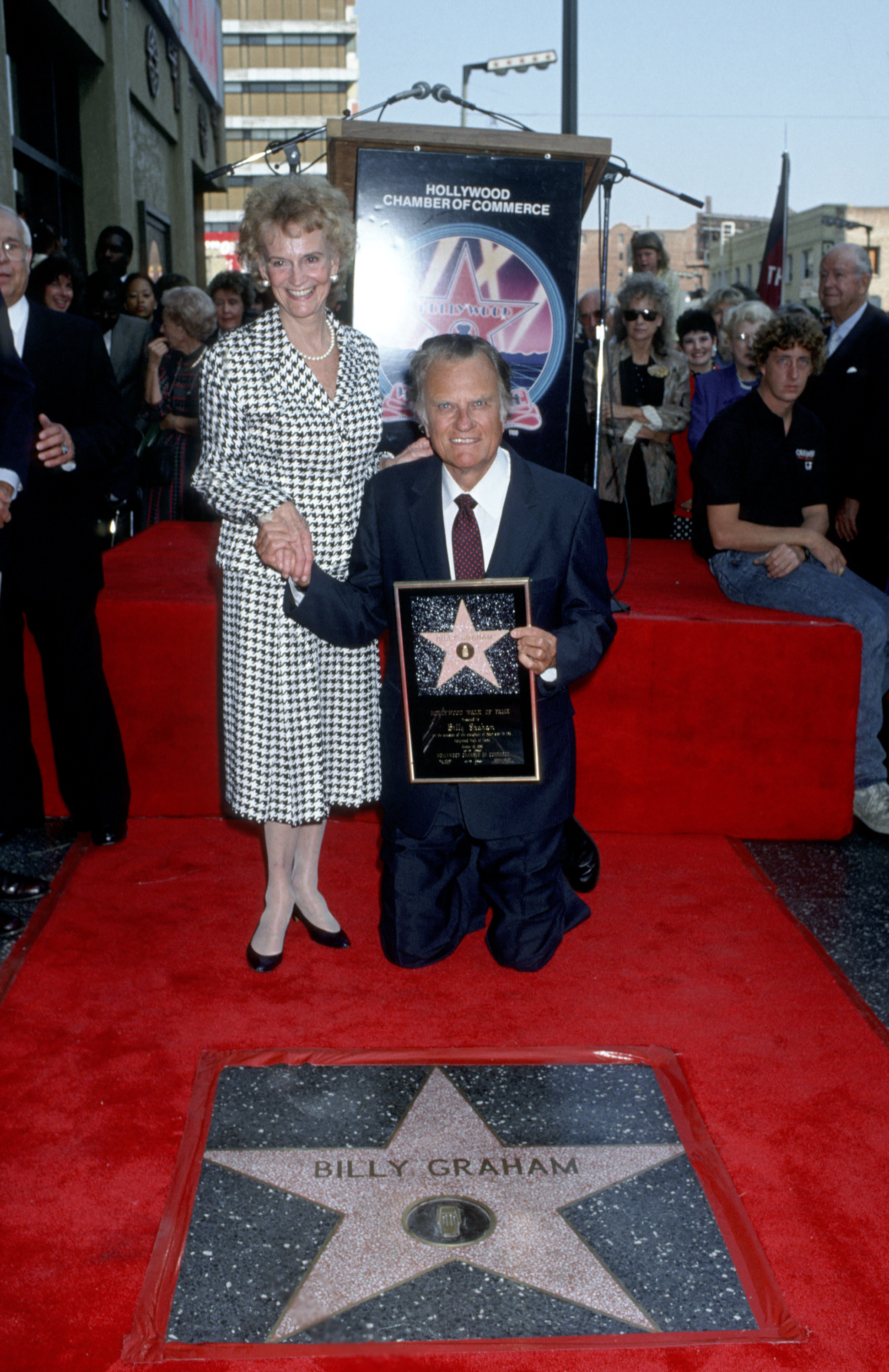 Graham also shared a relationship with Queen Elizabeth and interacted with Winston Churchill in 1954.

“The prime minister was set to meet with the Duke of Windsor,” Whalin says, “but he held him off for a few minutes because he was talking to Billy about faith. Billy prayed with Mr. Churchill in his office.” Unlike his fellow evangelicals in the ’80s and ’90s, Graham was never involved in a major scandal, although certain controversies occasionally plagued him.

He was criticized for not being a more vocal leader in the civil rights movement, though he did insist on integrating the seating at his revival meetings and he became a close ally of Martin Luther King Jr. And Graham’s close ties to Richard Nixon through the Watergate debacle caused him to pull back from some of his political involvement. After a 1972 tape of a conversation he had with Richard was released 30 years later, Graham had to beg forgiveness from Jewish leaders for the anti-Semitic remarks caught on the tape, which he deeply regretted.

Still, his famous crusades are credited with persuading an estimated three million people worldwide to commit their lives to Christianity. “He was probably the dominant religious leader of his era,” says William Martin, a historian at Rice University and the author of A Prophet With Honor: The Billy Graham Story. “No more than one or two popes, perhaps one or two other people, could come close to what he achieved.” His mass appeal was undeniable and his family was happy to share him with the world.

“He loved us desperately,” says Ruth, founder of Ruth Graham Ministries in Waynesboro, Virginia, “but he regretted not spending more time at home” with her and her siblings, Gigi, 72, Anne, 69, Franklin, 65, and Ned, 59. “He’d written about that, so I’m not saying anything he didn’t say.” As a father, he was stern but fair. “He hated spanking,” Ruth notes. “He was a very loving, gentleman, but he had his boundaries. We could see that steel in those blue eyes when he’d say, ‘That’s enough!’ We wouldn’t argue anymore!” While her dad spent a lot of time on the road, his wife “was very grounded and she kept us all grounded,” Ruth says of her parents’ 63-year marriage. 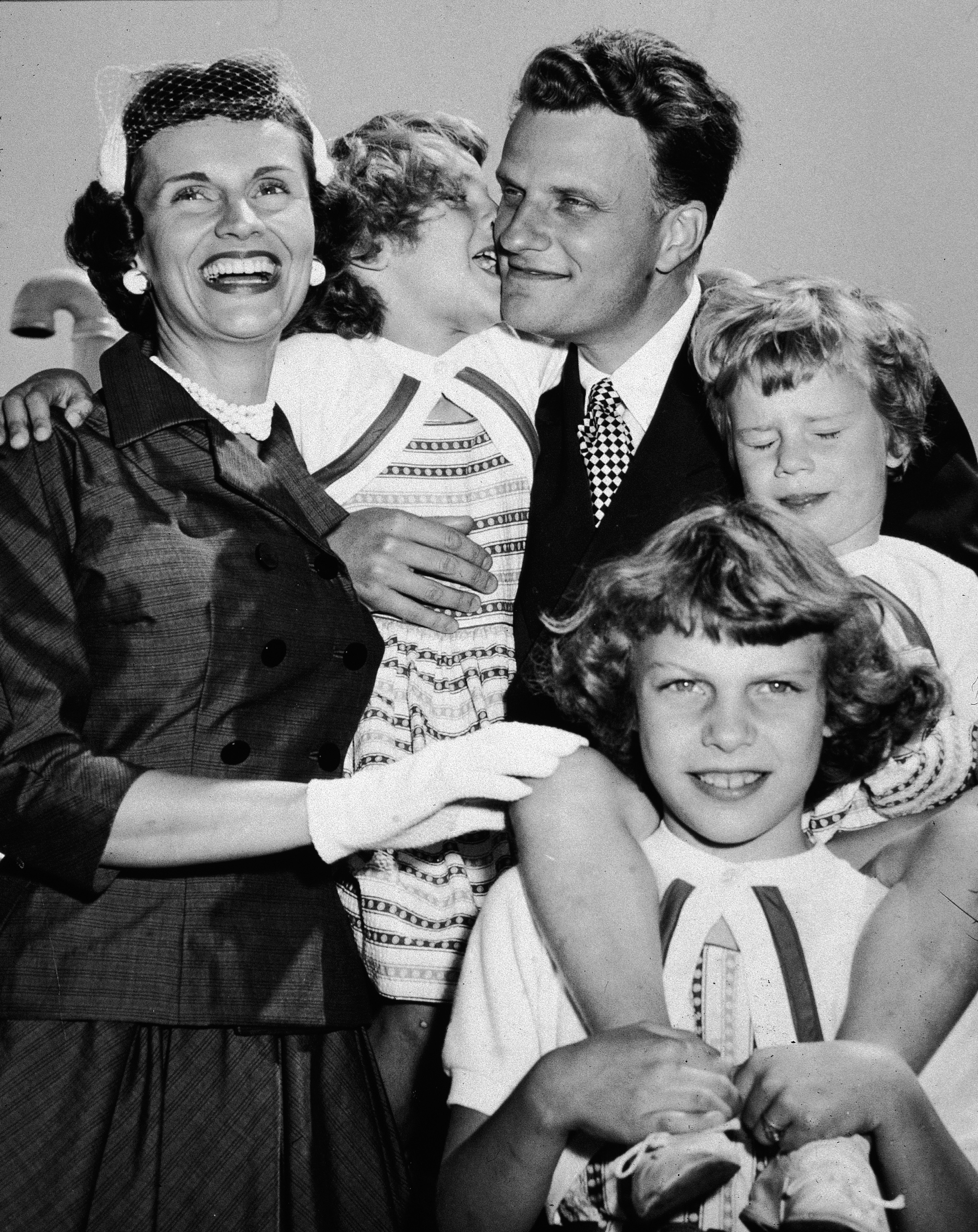 “She was his confidante, his advisor, his friend, his wife, his lover — all wrapped up in one person. They were just the right pair for each other, and I don’t know another woman who could’ve put up with what she did,” Ruth shares.

Graham struggled in the days after his wife’s 2007 death at 87. “He just adored her and he fell into a depression for about two years,” Ruth says, but adds, “He got through it with the grace of God and he just snapped out of it and became his old self again.” His grandchildren helped bring out his playful side. “He’d play spider by sitting in the middle of the room, stretching out his long arms and fingers, trying to catch them,” Ruth beams. “They’d try to get as close to him as possible, then dance off, shouting with glee. He just loved it!”

Joel Osteen remembers Graham’s warmth, too. “About 10 years ago he invited me and my wife, Victoria, to his home in North Carolina,” Joel recalls. “I grew up as a preacher’s kid watching Billy Graham, so it was surreal. He was very personable and joyful. And humble. He asked, ‘What are you doing in town?’ We said we came to see him and he couldn’t believe that. He was just so gracious.” Country music legend Charlie Daniels, 81, was a longtime friend who joined his hero on several crusades. 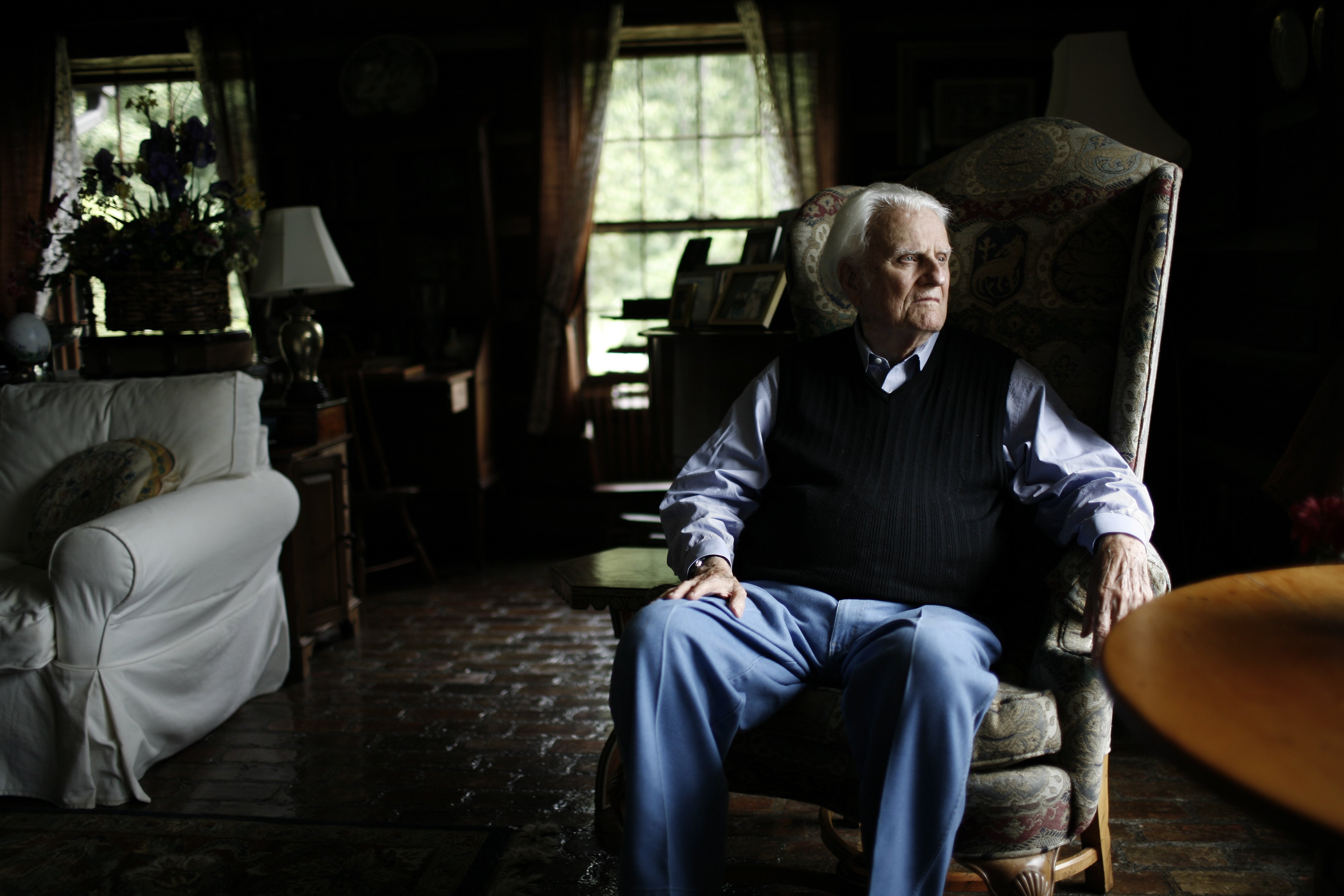 “He’d get up and say, ‘This is not about me, it’s about Jesus,'” Charlie tells Closer. “There was one Billy Graham, only one. People ask, ‘Who is going to fill his shoes?’ The answer is nobody. Billy Graham was a time in history and God put him in a place where he needed him to be.” Ruth, her siblings, and Graham’s grandchildren will miss him most, but there are joyous reminders of his legacy everywhere. “I was listening to a broadcast today and I heard his voice. I’m so grateful we have his voice to listen to for the rest of our lives,” Ruth shares. “But I’ll miss hearing that voice on the phone.”

Due to his deteriorating health — Graham had been battling vision and hearing loss, along with Parkinson’s disease symptoms for nearly 20 years — he spent a lot of his recent days sleeping, Ruth reports. “He was not really with us,” she adds, and in his later years, he noted, “Most of my life has already been lived. I’ll be glad when the moment comes when the Lord calls me to heaven. I get tired down here sometimes.” That’s why on the day of her father’s passing, Ruth could see a blessing beyond her own grief.

“This really is a glorious day. My father is finally free,” she says. After two days of lying in state in the United States Capitol Rotunda, Graham was buried on March 2, next to his wife on the grounds of his evangelical empire in Charlotte, North Carolina. “He’s with my mother again,” says Ruth. “And for the first time, he’s seeing Jesus face-to-face. How exciting that is for him!”

Next, see heartbreaking celebrity deaths from the past in the video below:

This post was written by the Closer staff. For more, check out our sister site Closer Weekly.