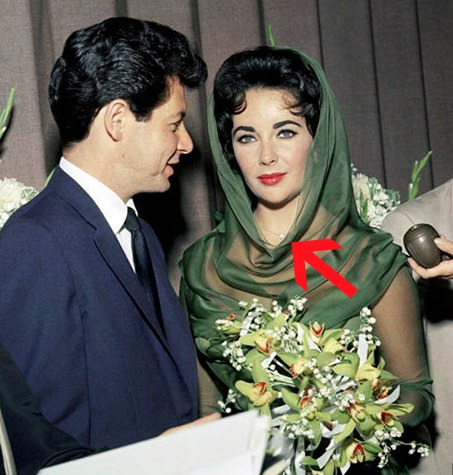 It’s a little-known fact that sounds scandalous: When Elizabeth Taylor exchanged vows with fourth husband Eddie Fisher, she wore a beloved heart pendant, given to her from a former husband. But the story behind her decision, as her long-time personal assistant Tim Mendelson told WomansWorld.com, reveals that the fashion choice was actually quite heartwarming:

“Elizabeth Taylor had emotional attachments to jewelry based on who had given it to her. Many don’t know that the heart pendant necklace she wore to her wedding to Eddie Fisher was actually a gift from third husband Mike Todd just before he was killed tragically in a plane crash. Jewelry for Elizabeth was sentimental above all else. She never considered her jewelry to be trophies. So when she married Eddie Fisher, who was Mike’s best friend, she proudly wore the heart pendant, knowing that both she and Eddie loved Mike so much and Eddie would never be jealous of this beautiful gesture. Symbolically, Mike Todd was with Elizabeth Taylor and Eddie Fisher celebrating their love together. It was a beautiful moment in time and tribute to their mutual love of Mike Todd.”

MUST-SEE: This Rare Video of Elizabeth Taylor Doing Her Makeup Has Women in Awe

In fact, Elizabeth wasn’t even the only woman to whom Mike gave this exact necklace! He had an identical one made for Elizabeth’s devoted mother, Sara Taylor.

PLUS: DIY Jewelry Organizers That Are Easy on the Eyes — and Wallet