Feel that vibration in your head? That’s the sensation of your mind being boggled by the fact that — somehow — the Walt Disney classic animated film Peter Pan turns 65 this year. But if you’re shocked, imagine how Kathryn Beaumont, the voice of Wendy Darling, must feel, considering she first brought the character to vocal life when she was just 12 years old, and that it’s a performance that has lived on through the years.

Says Kathryn in an exclusive interview that’s tied into Peter Pan‘s digital and Blu-ray release as part of Disney’s Signature Collection, “It’s very exciting that it still resonates with the public, and the fact that the new generation is interested in seeing these wonderful stories that came out when I was growing up.” 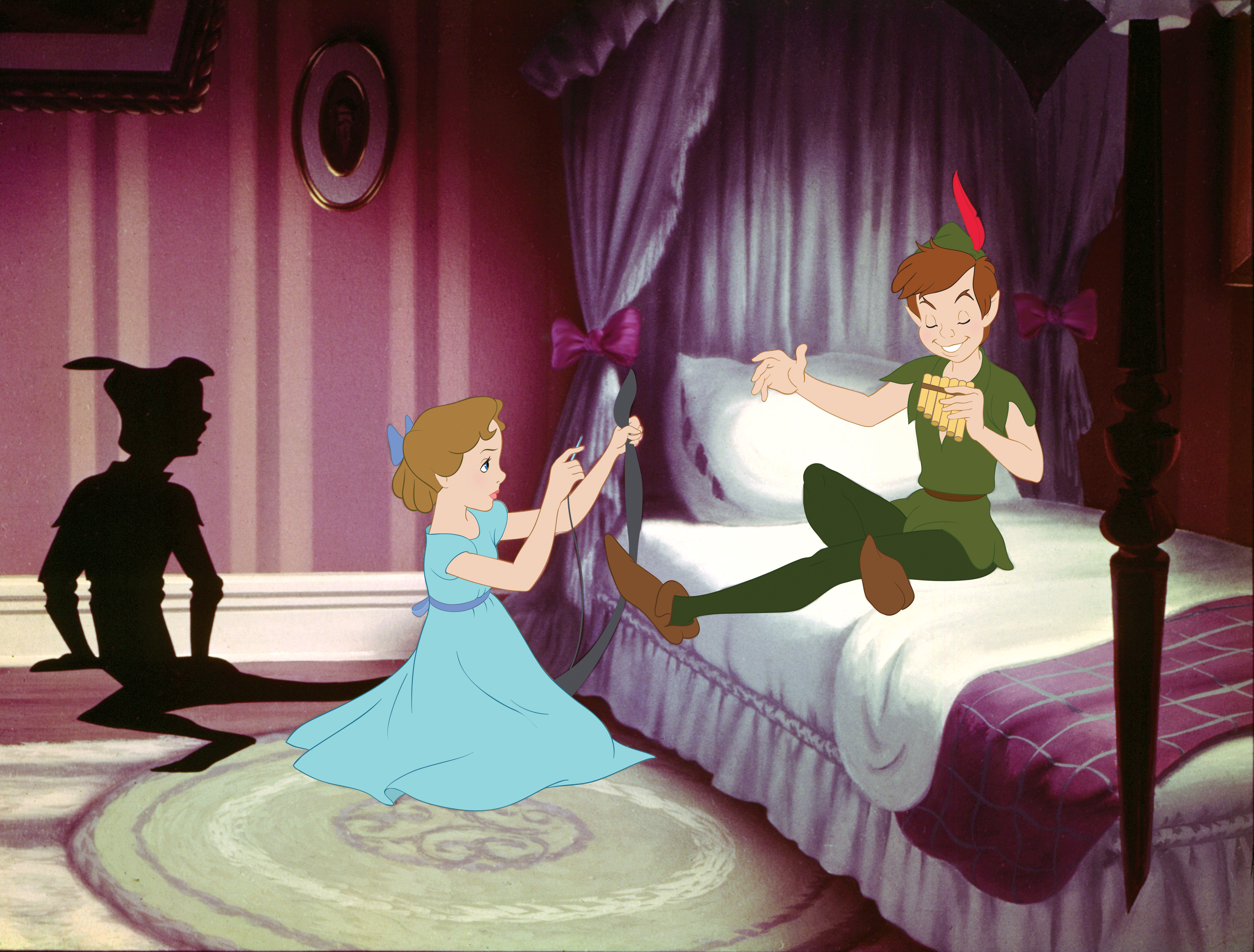 “To that point,” adds Mindy Johnson, a Disney historian whose most recent book is Ink & Paint: The Women of Walt Disney’s Animation, “J.M. Barrie’s story of Peter Pan had lasted for decades prior to Walt Disney’s development, so it’s timeless. There are so many great characters and themes. Adventure is always in order no matter what the calendar, so, in a way, it’s not surprising that this has all lived on.”

Kathryn was born in Britain on June 27, 1938, and made her uncredited acting debut in 1944’s It Happened One Sunday, followed by On an Island With You, The Secret Garden, and Challenge to Lassie. In 1951, she made her Disney debut voicing the title character in 1951’s Alice in Wonderland before voicing Wendy two years later in Peter Pan. 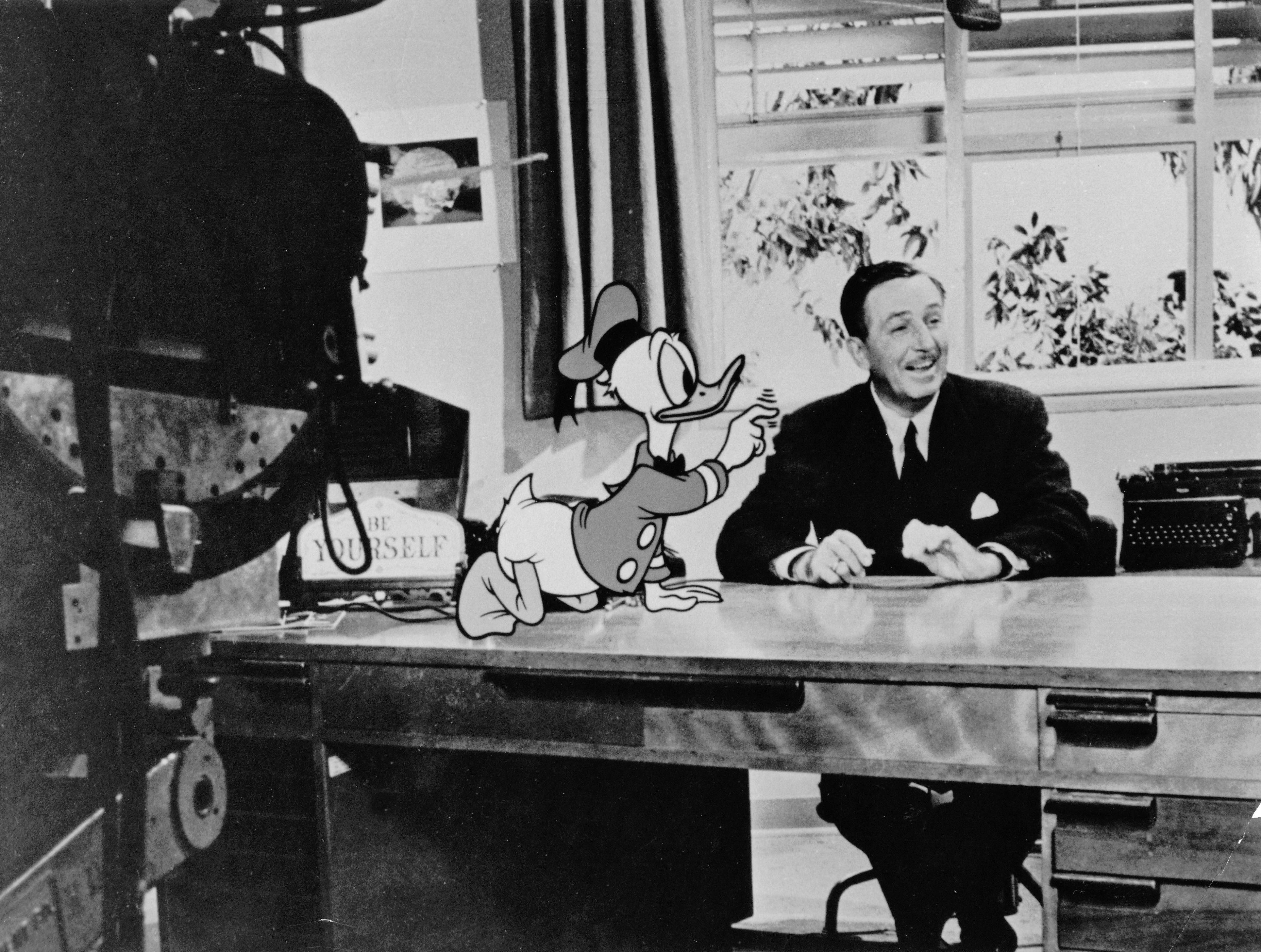 “I have so many wonderful memories of those days,” Kathryn smiles. “Mainly just meeting Walt Disney. He was so iconic at the time. Everybody knew him; the stories that he had animated that came out in film were just so wonderful and I just couldn’t believe I was actually going to meet the person who took the stories I loved so much and turned them into such wonderful films. It was an exciting time and I can remember being introduced to him for the first time when we were going to sign the contract for me to do the voice work. I walked into his office and he welcomed me. I was so frightened, because here’s Walt Disney, this person who is just such a huge name, and so famous. But he sat me down on the couch with my mom and we just started talking about the book itself and I forgot to be frightened anymore. From that point on, it was just a remarkable experience working with Walt Disney and the creative people that were at that studio during that period.”

What’s interesting about Kathryn’s experience with Peter Pan is that she more or less made the film twice, first with her voice in the recording studio and, then, in a live-action filmed performance which was used to capture her movements so that the animators could more closely capture the essence of a live performance. 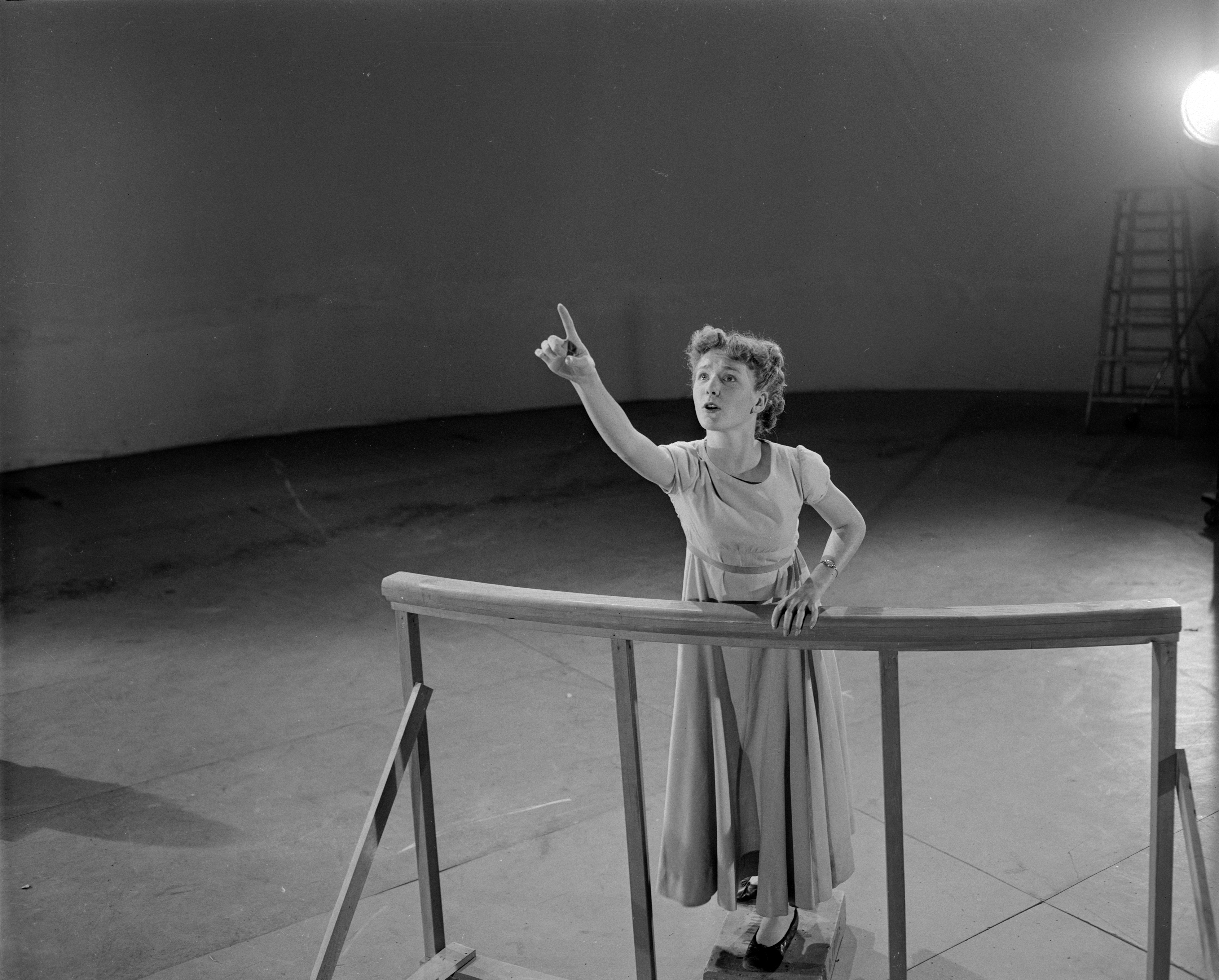 “It was quite extensive,” she recalls of the filming. “The actual stage was there, though there was hardly anything but a few boxes to sort of decide, ‘This is where you walk and stand, and this is where you’re walking out and doing this, that or the other activity.’ We just used our imagination to do the live action, but the idea of shooting the live action was for more inspiration for the artists, because they could watch the human figure moving and then they were able to draw that character more realistically than if they were just using it from their imagination. So they would see my movements, and the way that the scene played out in live action. Then they could make the transfer a lot more easy. That’s sort of how the situation worked; I did the recordings first and then a few weeks later they were ready to do the live action, which was on a stage with the camera and lights and all of that, but very little else. You just had to imagine the set up and the set, and the building, and all of that.”

Adds Mindy, “The live-action work was so key, particularly in certain settings and scenes, but also for the characters. Tinker Bell being one of the primary examples of that, where she was a little flash of light in stage versions, now, for the first time, she could be embodied, and Kathy did early explorations on Tinker Bell working with large props.” 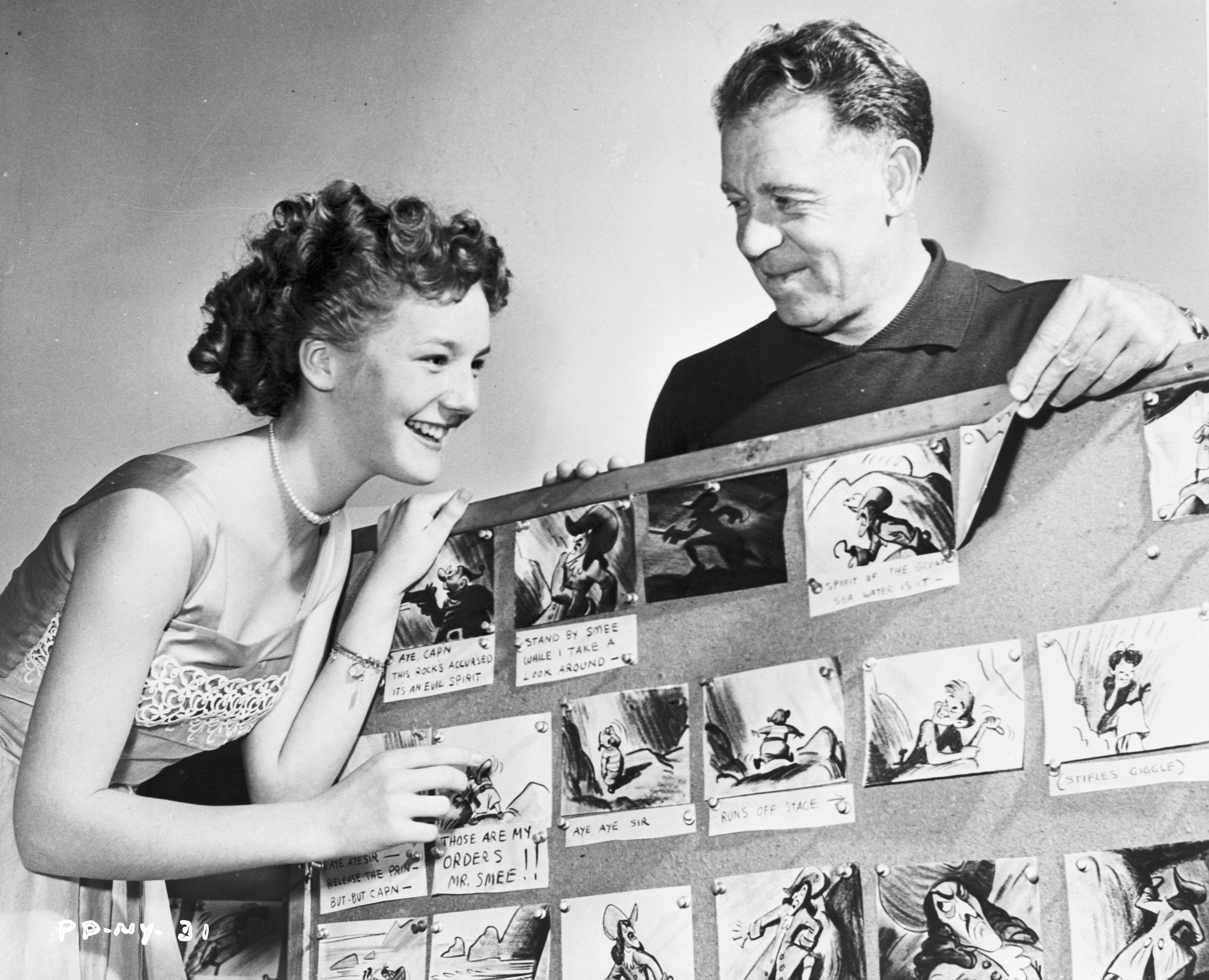 “Oh, yes, I do remember that,” interjects Kathryn with a laugh, “because they really weren’t quite sure how they actually wanted to visualize Tinker Bell. They didn’t want her to be an adult kind of character, and they didn’t want her to be that childlike. They were wanting something in between, but weren’t quite sure what was going to work out for that. So they did have me do a few scenes as Tinker Bell to get things started.”

That particular performance required quite a bit of pantomime, given that Tink didn’t speak. Says Mindy, “They were exploring for many years prior with different forms and shapes for the character, but by the time [animator] Marc Davis was brought in to design that character, that pantomime element was in place, but it was a challenge. In early script explorations, they were looking at dialog for Tinker Bell as a possibility, but eventually it was brought back around to the magic of pantomime to sort of make this character a little more unearthly and to have her voice be expressed as bells similar to the play. To make that pantomime more effective, Marc defined her as a little girl from the waist up and a woman from the waist down, so you can see why Kathy, since she was there and very familiar with their process, was brought in.” 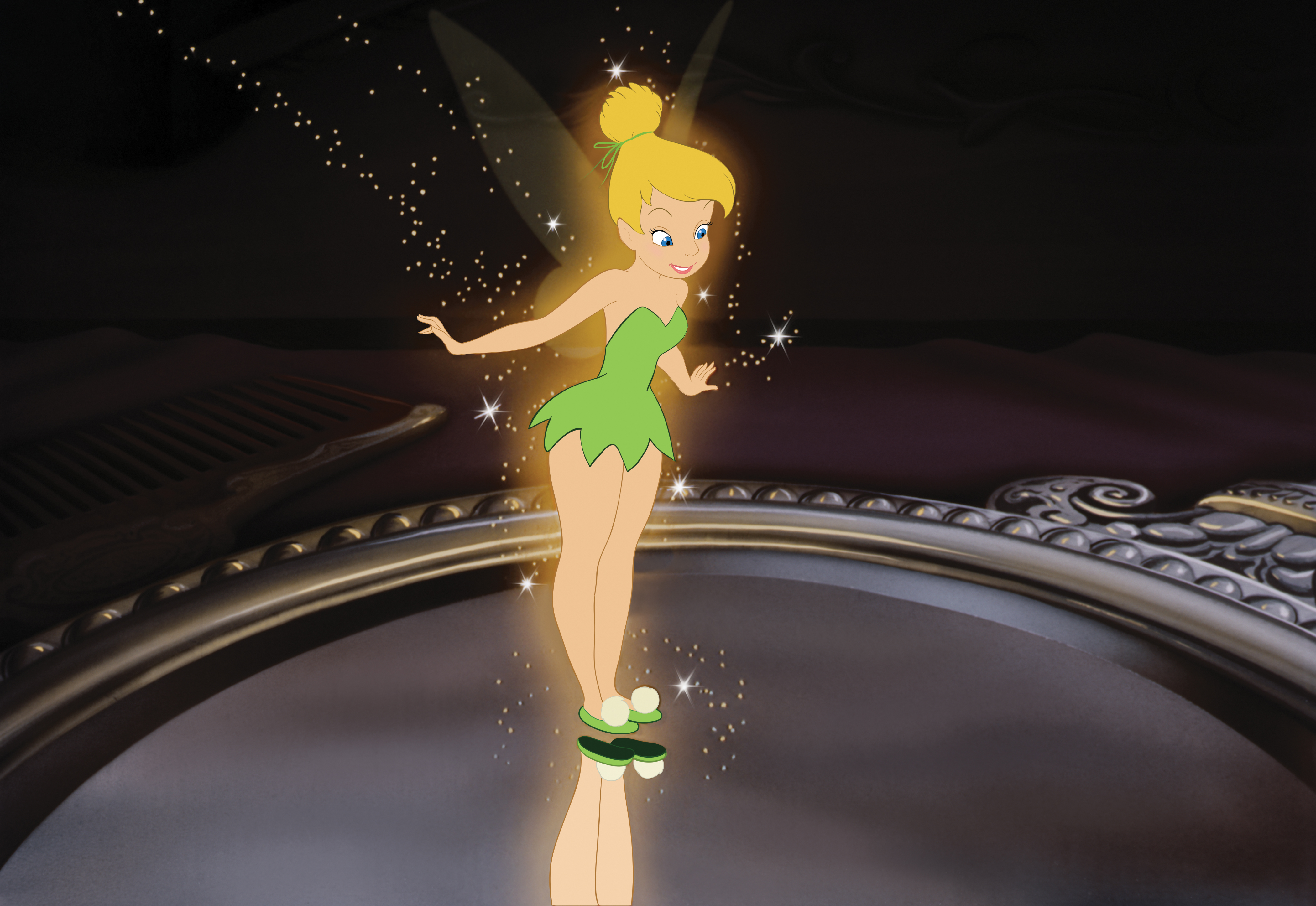 One area that pantomime was certainly not used in during the live-action shoot was the flying sequences involving the animated character. One would imagine that Kathryn would have merely been required to extend her arms and weave her body this way and that. Nope. “They hoisted me up on wires, and that was going to be very interesting for me, because I was somewhat afraid of heights. I thought, ‘Oh my God, they are going to put this device around my waist, and then I’m going to be hoisted all the way up.’ I was looking up to the top of the ceiling of the studio and thinking, ‘That’s a long way up, and I’m going to have to look down. That’s a little scary.’ I was nervous to start out with, but it passed, because they were so helpful in the way they had me move and how they explained everything so well that I got along just fine with that scene.”

“In truth,” adds Mindy with a smile, “you were moving about three or four feet from the ground.”

“Yes,” Kathryn acknowledges playfully, “in reality. But it felt a lot higher.”

As noted earlier, Kathryn had also voiced the character of Alice in Disney’s Alice in Wonderland two years earlier, which was actually fairly unusual for the time. “Walt really worked to define distinct, memorable characters,” Mindy notes. “He wanted the voice to supplement, add and drive the characters. He utilized known voices of the day with Hans Conried [Captain Hook] and many others, but their characterizations, the voice, is really the inspiration for so much, particularly for the animators. So for Kathy to be able to voice two characters back-to-back was pretty unique, but I think Walt purposefully chose her, because her accent is accessible.”

“That was something very important to him,” Kathryn concurs. “He kept saying he wanted the voice to be an authentic British accent, but not too British for Americans to find it hard to understand or hard to follow. Also, my voice had matured a little when you consider that when I was working on Alice, I was 10 or 11 and it lasted for almost four years. By that time I was an adolescent and just going into becoming a teenager, which perfectly fit with the Wendy character.”

Overall, even all these years later, Kathryn looks back at it all with not only nostalgia, but a genuine appreciation for being a part of the Disney legacy — to the point where, when you go to the Disney theme parks and hear the voice of Alice or Wendy (in dialogue that is not in either film), it’s Kathryn that you’re hearing.

“I feel so fortunate to have been chosen at that time to participate in this wonderful experience,” she says, “and it’s something that I always remember fondly and appreciate so much. I moved on to other things in my life after Peter Pan. I finished my schooling, went to college and then came out with a teaching credential, and spent my adult life as a teacher. So I did have a completely differnet career as an adult, but I’ve always treasured those memories of the years that I was with Disney, and the fact that I was part of that wonderful era.”

The Peter Pan Signature Collection will be available for digital download on May 29th, and on Blu-ray June 5th.

‘The Wizard of Oz’ and Beyond: Life for the Cast After the Yellow Brick Road