We love all the brain teasers and puzzles we find online, but the latest riddle making the rounds on the internet is especially entertaining. We’ve seen everything from puzzles about finding out which coffee mug gets the coffee to brain games about locating the robin among the Christmas trees. But this brain teaser involves candles, and let’s just say a lot of people are having trouble finding the light at the end of the tunnel here.

This riddle, which was first spotted on Instagram, reads, “I have seven candles lit. Two blew out. How many candles do I have left?” Anyone who got the riddle wrong had to post it on their Instagram story (a temporary photo that disappears after 24 hours). When a lot of users started posting this brain teaser, it made onlookers take a second glance at it. 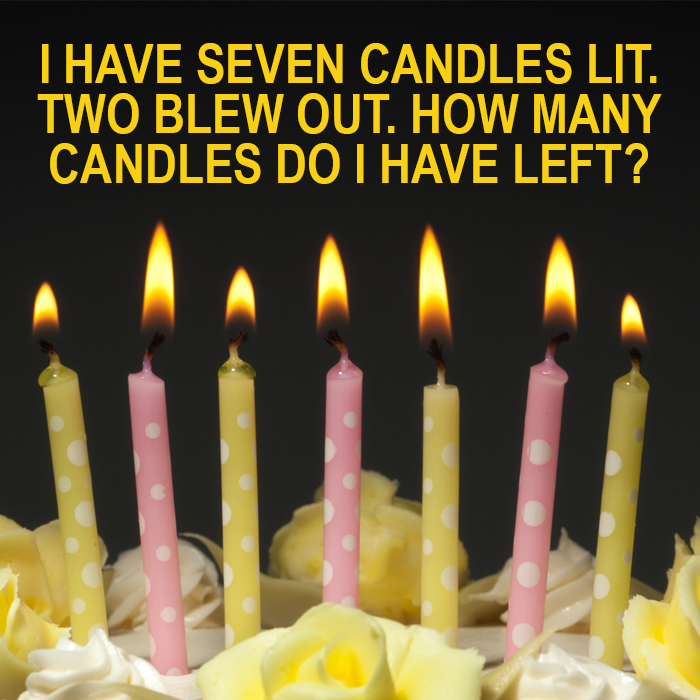 According to Story Pick, many people jumped quickly to say that there were five candles left. If that was your first instinct, you’re certainly not alone. After all, we know very well that seven minus two equals five. But unfortunately, that answer’s wrong, because there’s actually nothing to subtract here — the riddle never stated that the two candles that blew out also disappeared.

Other people theorized that there were actually two candles left instead of five, pointing out that if two candles were blown out, the other five would melt — leaving behind the two that were no longer burning. While that’s certainly a creative approach, that’s also the wrong answer.

Give up yet? The correct answer is actually seven! You still have all the candles, regardless of whether they’re lit or not. Too funny!

How Many Circles Do You See in This Confusing Brain Teaser?