In the past year and a half, Rob Jones has been running. A lot. He estimates he’s ran about 524 miles in the past 18 months, which is incredible, and sounds exhausting. But Rob is training for something even bigger. He’s been preparing for an astounding physical feat — He’s running 31 marathons in 31 days. That’s over 812 miles of running in one month. For a mere mortal, that sounds, and probably is, nearly impossible. But Mark, a Marine veteran, is not only a fighter; he’s a survivor. He’s running with two prosthetic legs.

Rob grew up in Lovettsville, Virginia, and graduated from Virginia Tech in 2007. In his junior year of college, he joined the Marine Corps Reserve as a combat engineer. His primary role was to detect IEDs and other explosives. Rob was deployed in Iraq in 2008, and to Afghanistan in 2010. While he was in Afghanistan, he was in Taliban territory, and was supposed to clear an area with a high chance of having an IED. “One found me before I found it,” he told The Washingtonian. 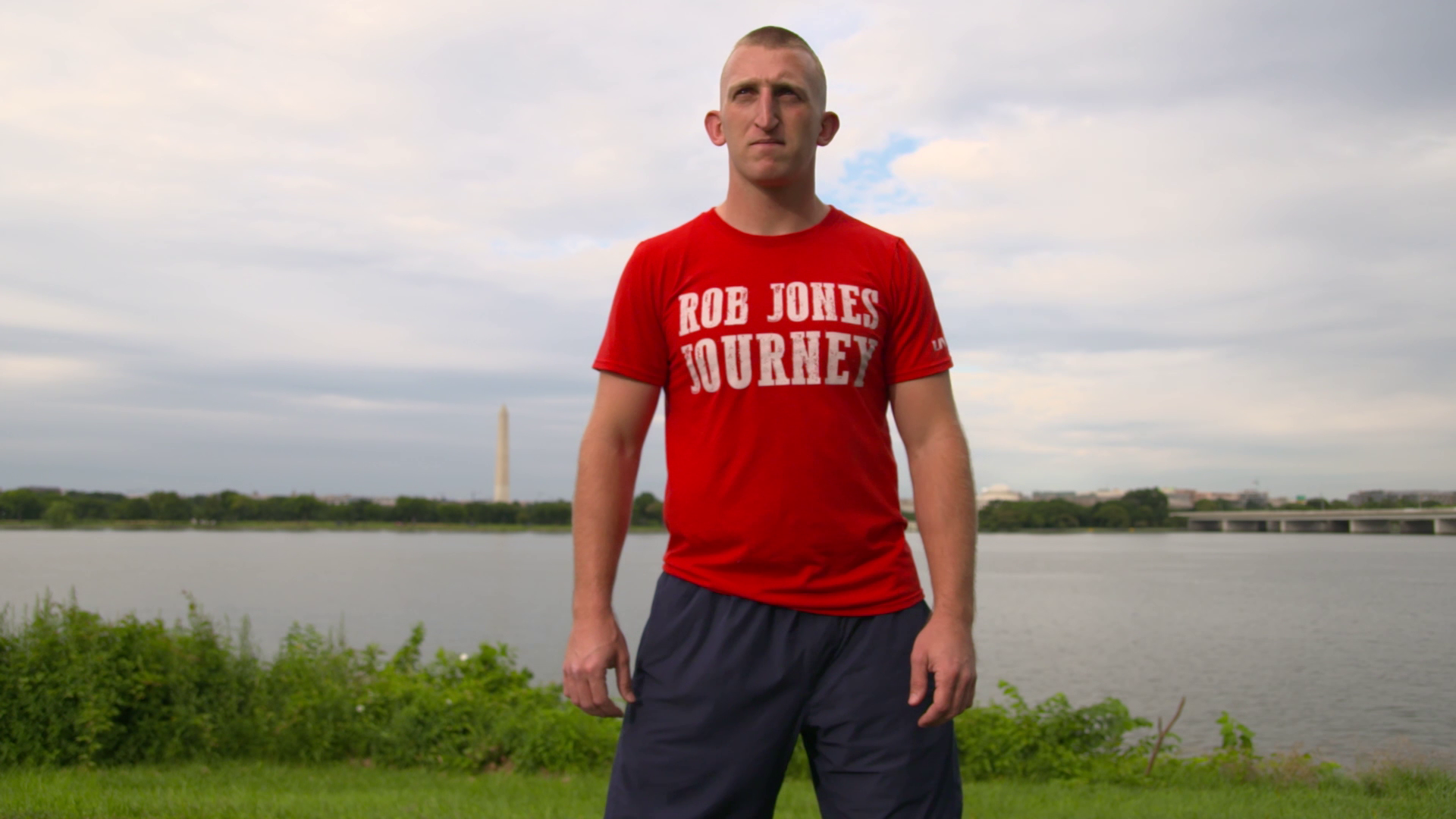 After the explosion, Rob’s fellow soldiers put him in a helicopter and tied tourniquets around each leg. “Those guys didn’t know if there was another IED, but when I got hurt they just came over,” Rob told TIME. For most people, such horrific injuries would destroy their lives: A disarticulation in his left knee and an amputation above his right knee. But Rob didn’t let his injuries hold him back from living his life.

After his wounds healed, Rob began rehabilitation, and worked hard to learn how to walk with two prosthetic legs. But learning to walk with two new legs wasn’t enough for Rob, and he began to bike, run, and row, too. “I am always in search of a challenge that I can use to become better,” Rob writes on his blog. He writes that he “took naturally to rowing” and challenged himself to compete for the 2012 Paralympics. He and his partner, Oksana, won a bronze medal in the 2012 Paralympics in London.

Happy Memorial Day. Many will say that there can be no such thing. Indeed, it is a day meant for somber reflection upon the many who decided that there existed something more important than themselves. Family. Country. Corps. Justice. Liberty. Things like these are so important that they are worth our lives. But I am happy. Happy to live in a country with countless individuals who make this choice every day. Happy to live in a country that recognizes the gravity of such a decision, and is thusly grateful for it. I am happy that these people have sacrificed all that they can on behalf of me and the ones I care about. So yes, Happy Memorial Day. Be worthy. #usmc #veterans #memorialday #marines #america

Rob’s next physical challenge was also a challenge to benefit wounded veterans like himself. In 2013 he biked from Main to California, 181 days and 5,180 miles later. He raised $126,000 for the Coalition to Salute America’s Heroes, the Injured Marine Semper Fi Fund, and Ride 2 Recovery.

But now, Rob’s goal is even greater.

Through his month of marathons, Rob’s goal is to raise $1,000,000 for charities that aid wounded veterans. Veterans Affairs estimates 20 veterans die by suicide each day, which Rob calls a tragedy. Rob not only wants to raise money for veterans, he also writes he wants to, “raise awareness concerning the struggle of America’s veteran population,” and he also hopes, “to incite action among our citizenry.” The money Rob raises will be donated to the Tunnel to Towers Foundation, the Injured Marine Semper Fi Fund, and the Coalition to Salute America’s Heroes.

I am thankful to live in a country that honors its veterans as much as mine. Since my injury I have been met only with gratitude and appreciation by my fellow Americans. I have been supported by charities started by these same people. I have been provided with the best medical care, all of the prosthetic devices I could want, and the expertise to help me to use them by my government. I do not think that any other country loves its veterans as much as ours, and I have been around a bit. From the government to the people, we are appreciated like no other place in the world. This is at the wounded veteran memorial in DC. Photo by @ivankander

Rob’s journey started yesterday in London, England, and will continue for the next 30 days in cities across the United States. Today, he’s in Philadelphia, Pennsylvania. His last marathon will be in Washington D.C. on November 11 — Veterans Day. Rob invites people to run, watch, and encourage him along his journey. His schedule can be found on his website.

We wish Rob the best of luck.

To donate to Rob’s cause, visit his website at robjonesjourney.com.

Her Disabled Veteran Husband Mowed the Lawn Every Week. But Then, He Got a Shocking Letter That Made Him Forget His Push Mower

Depressed After the Vietnam War, 4 Veterans Went Their Separate Ways. And Then They Found Each Other Online and Got an Idea That the Whole Internet Adores