When fans of TLC’s hit reality show, My 600-lb Life first met Olivia Cruz, she weighed 578 pounds and lived in her mother’s basement. She was dependent on her family for everything and couldn’t even perform the most mundane daily activities like showering and walking without assistance.

After undergoing two unsuccessful weight loss surgeries already — including a lap band — doctors in Houston agreed to meet with Olivia and perform a sleeve-type gastric bypass. As a result, she managed to drop almost 400 pounds. However, since losing the weight, she’s spent the last couple of years stuck at around 200 pounds and blamed the lack of progress on her ongoing medical issues.

In April 2016, People reported that the former reality star wanted to get skin removal surgery but her doctor, Younan Nowzaradan, thought she was unmotivated to lose the rest of the weight needed to perform the procedure. Plus, she was also recovering from a knee surgery. 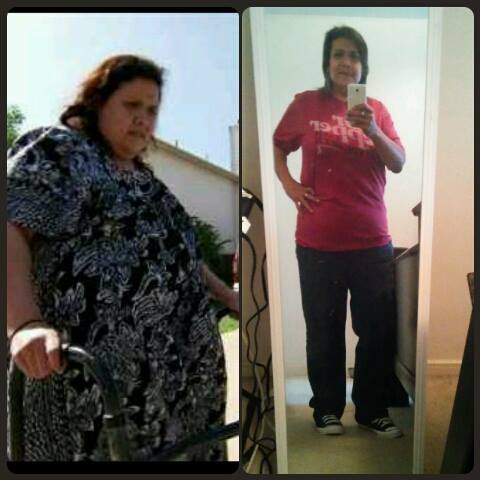 Olivia posted this photo in April 2015 with the caption, “This is what determination and never giving up does…have a blessed day fbookies!!!” (Photo Credit: Facebook)

Despite the setback, the now 49-year-old is excited about finally fulfilling her dream of becoming a chef. During an episode of My 600-lb Life: Where Are They Now?, Olivia said, “I had to stop training because I couldn’t stand and move around like I needed to, but now that I can stand all day, I’m going back to pick back up where I left off. And I’m so excited about that. The future I hoped for is so close now.” She added, “For the first time since I can remember, I can be active as much as I want, without having to use my cane or rest my knee. I’m so excited that my dreams are not just hopes for the future now. They’re literally starting to happen.”

MUST-SEE: Paula Jones From ‘My 600 Lb. Life’ Has Kept Off the Weight and She’s Never Looked Happier

Olivia concluded, “I can go back out in society again. And I can make a living for the first time in almost a decade and a half. Just three years ago, I was barely able to move, and barely able to take care of myself at all. Now I’m a completely different person. I’m able to be part of society again and go out in the world.” Go, girl!

If You Want to Lose Weight, Celebrities Say You Should Avoid These Common Foods

This Balloon Mimics the Effects of Gastric Bypass Without the Surgery