The summer Elise Robinson turned eight, her knee started hurting. She’d been playing basketball and jumping on the trampoline, so her parents didn’t think anything of it. But when the pain wouldn’t go away, her mom Jennifer decided it was time to take her to the doctor’s office. Her pediatrician found some swelling and warned them that if it didn’t go down in a week, they’d have to make an appointment with an orthopedic surgeon.

From there, Elise’s cancer diagnosis was quick — she had osteogenic sarcoma, a rare type of bone cancer, in her knee. By September, Elise had moved into the hospital at MD Anderson Cancer Center’s Children’s Cancer Hospital and started chemo, but her parents knew they still had another major decision to make by November.

“When you get diagnosed, you’re not quite sure what the path is going to be,” Jennifer Robinson explained. “You don’t know if there’s chemo, if there’s radiation, or surgery… You don’t know enough to ask the right questions.” Luckily, they had Dr. Valerae Lewis to help walk them through the process.

“[Elise] had a lesion in her bone,” Dr. Lewis said. “We biopsied it, and it turned out to be osteosarcoma.” But in addition to cancer, Elise would also need a surgery, and there were three major options for her case: limb-salvage surgery, amputation, and rotationplasty.

Though it would save her leg, she wouldn’t have full-range of movement like she used to. “You can’t run, you can’t jump, you can’t play a lot of sports, and Elise didn’t want that,” Jennifer continued. Together, Elise’s parents had decided that an amputation was the right decision to make — but then Dr. Lewis had introduced them to the rotationplasty surgery.

“[Rotationplasties] are not as common because they don’t look particularly appealing — more to parents than to kids,” says Dr. Lewis. That may be because the surgery itself involves amputating the leg above the knee and reattaching the foot to the leg, but backward. “So effectively, your ankle is your knee.” A prosthesis replaces the rest of your leg, and together they can manage all the functions that your leg could before. “[Rotationplasty patients] can run and jump and bike and play soccer, because now [they have] a knee that’s [their] own.”

When Elise learned about the rotationplasty, she knew instantly that it was the right choice for her. “Dr. Lewis showed us a video of a girl who had it at eight years old, the same age as Elise [was],” Jennifer explained. “My husband and I looked at the video, and we were like, ‘There’s no way! That is so out there!’ but Elise said, ‘Yeah, yeah that’s what I want to do.’ You know, casual as can be, ‘That’s what I want to do.’”

And it’s a surgery that’s becoming increasingly popular – thanks, at least in part, to simple word of mouth between patients like the kids at MD Anderson. “I have four girls with rotationplasties… [when] I have another little girl come in, and she sees how great these girls are doing, and they have no limitations, that’s easier to convince someone to do it than to say, ‘I’m going to put your foot on backwards,’” shared Dr. Lewis.

MUST SEE: This Woman’s Courageous Battle With Breast Cancer Makes Nothing Seem Impossible

Elise had her rotationplasty surgery in December, and by May, she was finishing up her chemotherapy treatment. Before summer was over, she was walking in MD Anderson’s annual back-to-school fashion show. According to her mom, she had barely any hair and she was using her crutches to walk down the runway with “half a leg and a backwards foot” — but she totally rocked it, even posing at the end of the runway. “Ta-da!” Elise joked, remembering the moment. 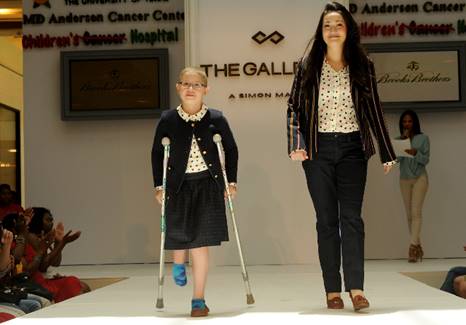 Not everyone was immediately on board with the fashion show — Elise’s dad had some concerns, namely that neither her hair nor her prosthesis had come in yet. But Elise and her mom had no fear. “We’re not hiding,” said Jennifer. “This is who Elise is now, we’re not hiding it. And Elise’s attitude was just that: If other people have a problem, that’s their problem.” Elise wasn’t going to let anything get her down — not even the stuffy school uniform they’d picked out for her to wear. “Just walking down the runway [was] really cool,” Elise shared.

A year later, Elise was strutting her stuff for the second time in the back-to-school fashion show. And this year, she was shining in a knee-length pink dress with a heart in the back, perfectly paired with a jean jacket. “I got lucky!” she admitted.

When we talked to her this year, she was gearing up for her third trip down the runway — and already dreaming about her outfit. “I like dresses,” she said, describing her ideal outfit as “a long colorful dress, like ankle-length and a lot of colors.” When it comes to pants versus dresses, dresses always win for Elise. Part of that is because it gets hot in Houston where Elise is from, and the other part is that her pants cover up her prosthesis, something she’s not looking to do. “I don’t want to cover it up,” she explained.

For Elise, her prosthesis is just another opportunity to accessorize — and accessorize she does. “Let’s see, you’ve got one, two, three, four bracelets on right now,” her mom counted for us over the phone. “You have a bracelet around your ankle, and I think you have a bracelet even on the ankle of your prosthetic leg.”

Around Christmas time, Elise will decorate her prosthesis with battery pack string lights, and she works with a man to customize her prosthesis to her own personal style. “One of the men on the [prosthesis] team, José, he does an absolutely awesome job with [her] leg,” Jennifer said. “In his spare time, he works on motorcycles… so [the prostheses are] really cool. People come in and say, ‘I want this on my leg,’ and he can do it.” Elise and her mom will also go to the fabric store, pick out something they like, and take it to José. Elise’s current prosthesis has a cool purple pattern to it — as well as a leather cover for the metal. 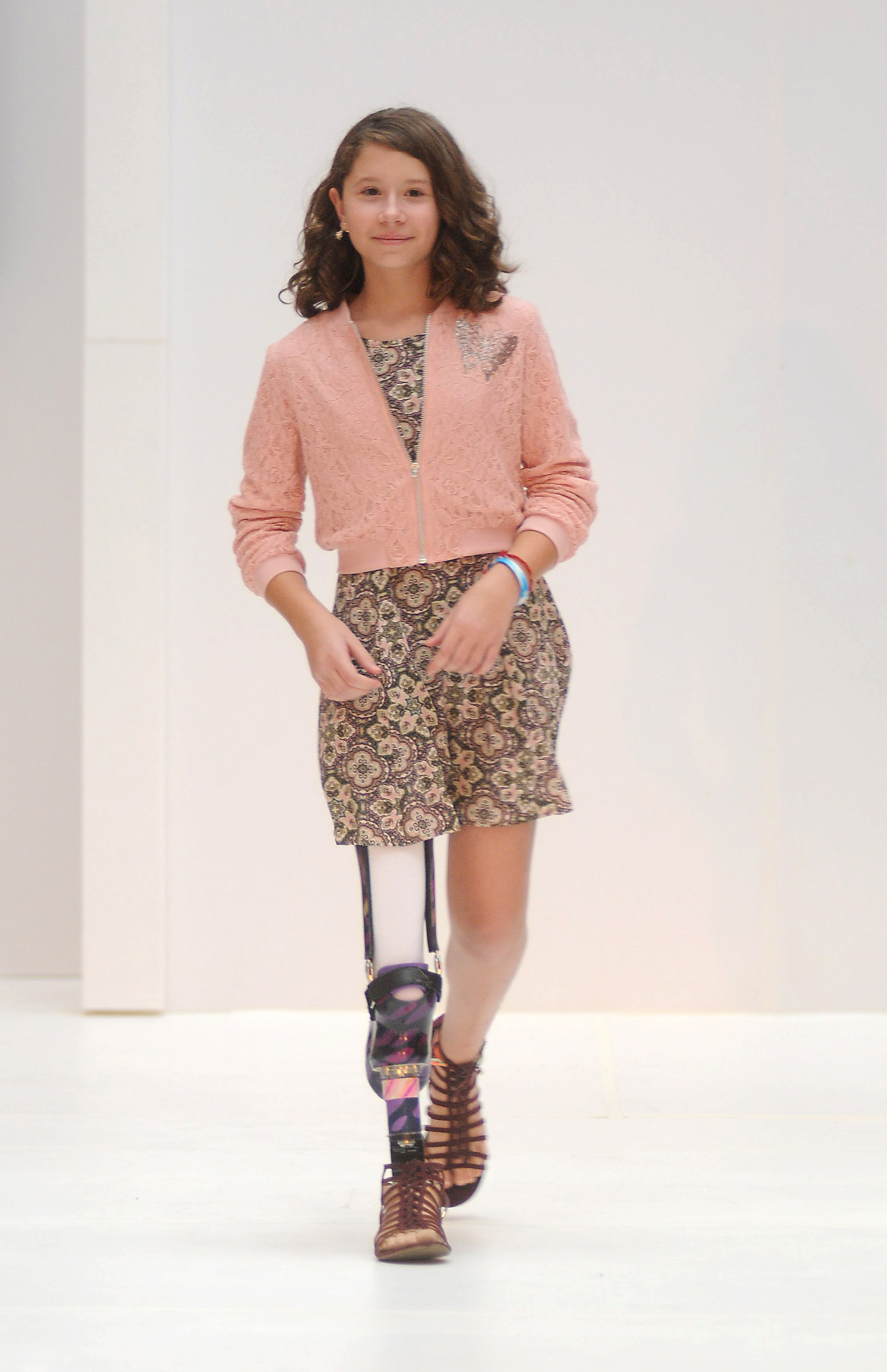 But fashion isn’t Elise’s only outlet. While she was at MD Anderson, she also participated in their Children’s Art Program, and her favorite activity was using the pottery wheel. “I really do love making bowls and tall vases,” Elise explained. “Working on it is the fun part, decorating it and painting it.” At school, she sings in the choir and plays the double bass in the orchestra. And soon, she’s getting ready to return to sports.

In September, Elise will start playing softball again, and next year, she plans to try out for her school’s cross country team. “I’m learning to run,” Elise said. “It’s really hard… And I have to work hard to get my legs strong enough to run. Right now we’re working on trying to get me to balance on my right leg ‘cause I can barely do that right now.”

But Elise and Jennifer have their goals clearly set, and they’ve been working hard over the summer to practice and train. They do all kinds of squats and lunges in what they’re calling Elise’s Boot Camp. Right now, though, Elise is pretty happy to just be a model in the back-to-school show and to show other kids and families what rotationplasties are like and everything that you can still do after one. 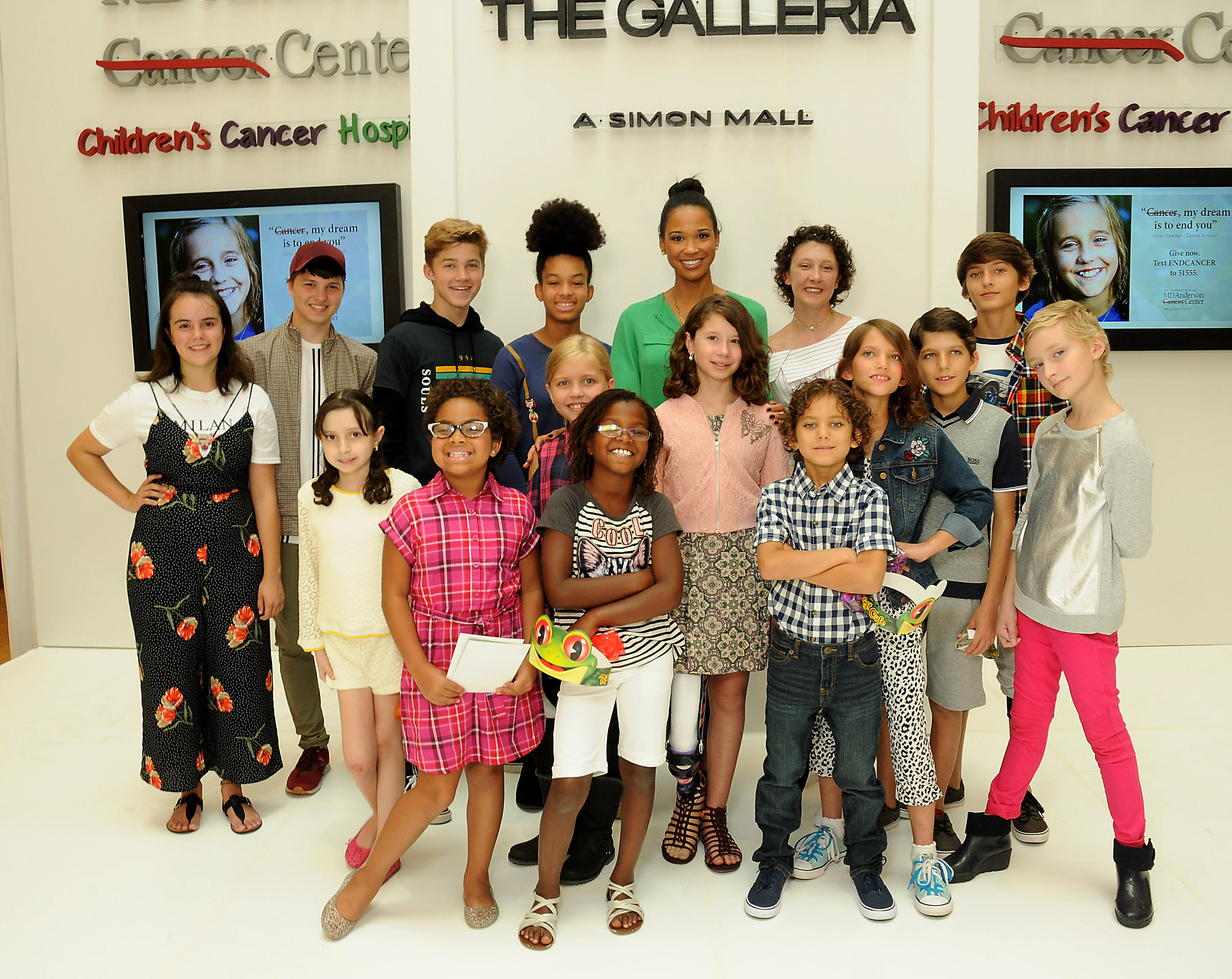 “It’s always good to get the word out,” said Jennifer, “because it’s such a rare cancer and most people don’t know about it… get the name osteosarcoma and the name rotationplasty out there… About 10 rotationplasties are performed in the US in a year, so it’s very rare.” Before Dr. Lewis told them about the procedure, they’d never even heard about it, despite doing their own research as a family. They’re hoping that raising awareness can give other families all the necessary info to make the right choice for them. “It isn’t the right decision for everybody. It requires a lot of work, it has the longest recovery,” Jennifer said. “But it’s important to me for people to at least have heard about it and then they can make the decision.”

The fashion show is equally important to Dr. Lewis and the rest of the staff at MD Anderson. “I think it brings awareness to the public,” agreed Dr. Lewis, adding, “I think it also really instills a sense of pride, and an excellent sense of body image on the kids…. It’s positive body image enforcement for the kids, but it also builds an incredible sense of confidence, incredible self-confidence to strut down the aisle, be well-received, and also be with other kids like them.”

This year’s fashion show was Saturday, Aug. 12th — and Elise looked absolutely stunning in a pink jacket, patterned dress, and strappy sandals with her prosthesis all tricked out and bracelets on her wrist. She walked with cancer patients and their siblings, MD Anderson teachers from the hospital’s on-site K-12 school, and models from Page Parkes Model Agency, and they all totally owned the runway.

With her third fashion show checked off her to-do list, we know Elise is hard at work training to reach her next goal in time for cross country try outs — and we have no doubt that whatever she sets her mind to, she’ll achieve with flying colors… and lots of accessories.

After a Tumor Robbed Her of Her Memory, Music Healed Her

For the First Time in More Than 20 Years, FDA Approves New ALS Drug