If you listen to people talk, we’re supposedly living in the “Golden Age of Television”; an era unlike any in TV history, with incredibly high-quality shows that represent the gold standard of writers at the top of their game. Uh, we assume that those people have never heard a bunch named Brady. Puhlease!

Okay, maybe that’s not the greatest argument in the world, but there’s no denying that television has had some pretty amazing ages along the way, one of the most amazingest being the 1973 season when CBS’ Saturday night line-up was impressive then, but mind-blowing in retrospect. It represented an evening of quality programming that’s never quite been duplicated. So join us as we take a trip back some 44 years into the past to see what was so special about those Saturday nights. 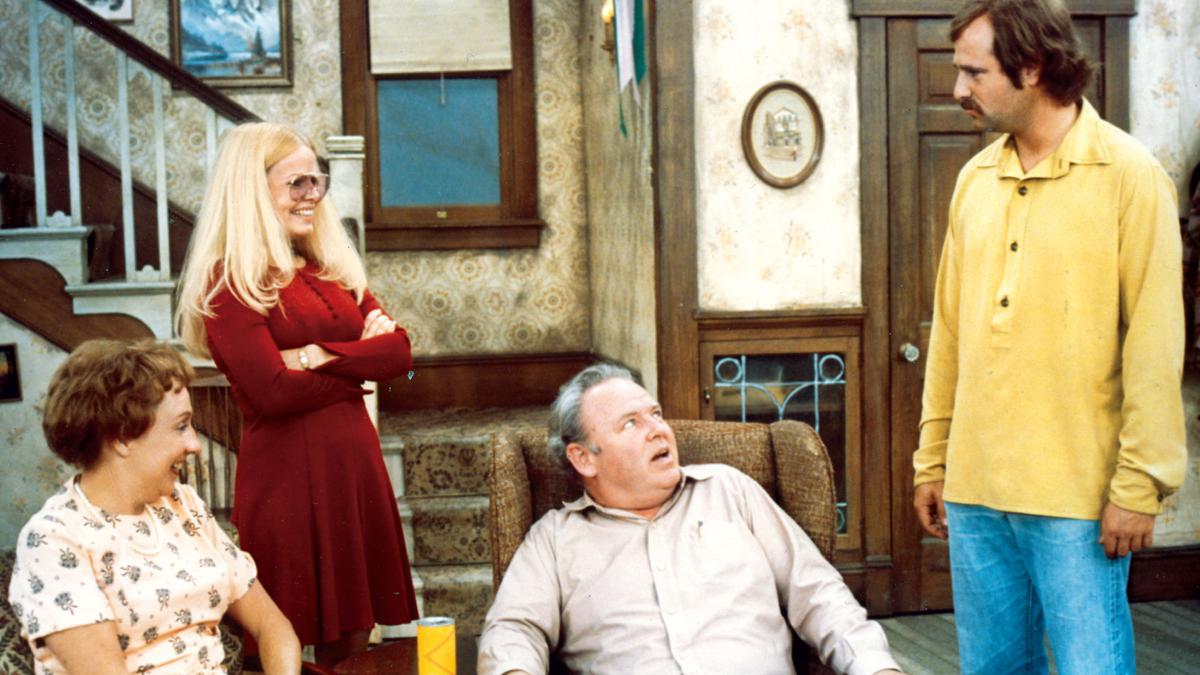 Created by Norman Lear (based on a British series called Till Death Do Us Part), this is a show that you would never be able to get on the air today. It managed to break pretty much every taboo of the era, tearing down the walls of political correctness and dealing with such things as racism, women’s lib, government policies, miscarriages, breast cancer, abortion, swingers, menopause and rape. And this was a sitcom. Oh, it also represented the first time that the audience ever heard a toilet flushing on the air.

The focus of All in the Family is on the Bunker family of Queen, New York. Sitting center seat (in his favorite chair) is Archie Bunker (Carroll O’Connor), a conservative bigot who has an opinion (usually wrong) about virtually everything. Over time, Archie gradually warmed his way into the audience’s heart — he proved that he could evolve… eventually). His wife is the lovable and brighter-than-she-seems Edith (Jean Stapleton), who Archie lovingly calls “Dingbat.” Mike Stivic (Rob Reiner, who you may know now as the director of films like Stand By Me, When Harry Met Sally and A Few Good Men) is Archie’s ultra-liberal son-in-law who represents the opposite of his view on any given topic, and is given the not-so-affectionate nickname “Meathead.” Mike lives in the Bunker household with his wife, and the Bunkers’ daughter, Gloria (Sally Struthers, who has her eyes opened on life and herself as a woman along the way). Needless to say, this was a set-up for a steady stream of explosive — yet enlightening — arguments.

All in the Family ran for nine seasons from 1971-1979, winning 22 Emmy Awards and eight Golden Globes. It gave gave birth to quite a number of spin-offs: Bea Arthur’s Maude (which spun-off Good Times), The Jeffersons (which spun-off Checking In, starring their maid), Gloria (Sally Struthers got her own show), Archie Bunker’s Place (starring Carroll O’Connor after All in the Family left the air) and 704 Hauser Street (which focused on the Bunkers house with new residents, an African-American family). All in the Family was the #1 series on television from 1971-1975. 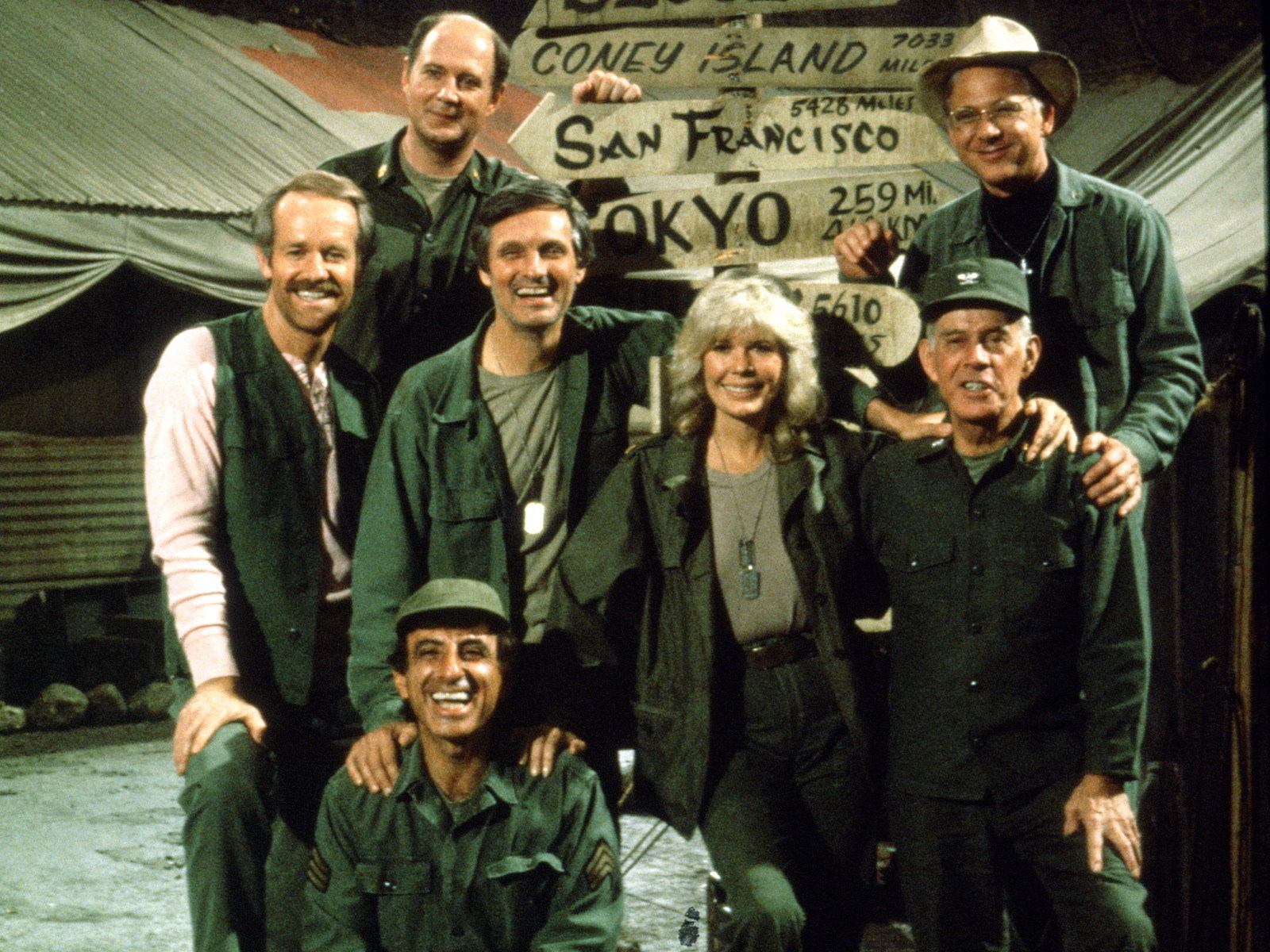 There would seem to be nothing funny about the Korean War (especially these days), but this series, based on the novel by Richard Hooker and the 1970 film of the same name, managed to mine plenty of humor out of the horrors of war. The focus is on the doctors and nurses of the South Korea-based 4077th Mobile Army Surgical Hospital, and it features an incredible cast of actors and some of TV’s most memorable characters: Hawkeye Pierce (Alan Alda), Margaret “Hot Lips” Houlihan (Loretta Swit), Max Klinger (Jamie Farr), Father Mulcahy (William Christopher), Trapper John (Wayne Rogers), Henry Blake (McLean Stevenson), Frank Burns (Larry Linville), Radar O’Reilly (Gary Burghoff), B.J. Hunnicutt (Mike Farrell), Sherman Potter (Harry Morgan), and Charles Emerson Winchester III (David Ogden Stiers).

Interestingly, the show ran for 11 years (1972-83), compared to the actual Korean War’s two-and-a-half. When it came to an end with the two-and-a-half hour “Goodbye, Farewell and Amen”, it broke all sorts of ratings records and became a national event. MAS*H won 14 Emmy Awards (out of the 100 it was nominated for), and eight Golden Globes. It also gave birth to two-spin-offs, the single season AfterMASH, focusing on several of the characters working at a Midwestern hospital following the war; and Trapper John, MD (1979-86), which took place 30 years after the war and starred Pernell Roberts in the Wayne Rogers role. A pilot that did not go to series was WALTE*R, which looked at Radar O’Reilly, who, after the failing of his family farm, becomes a St. Louis cop. 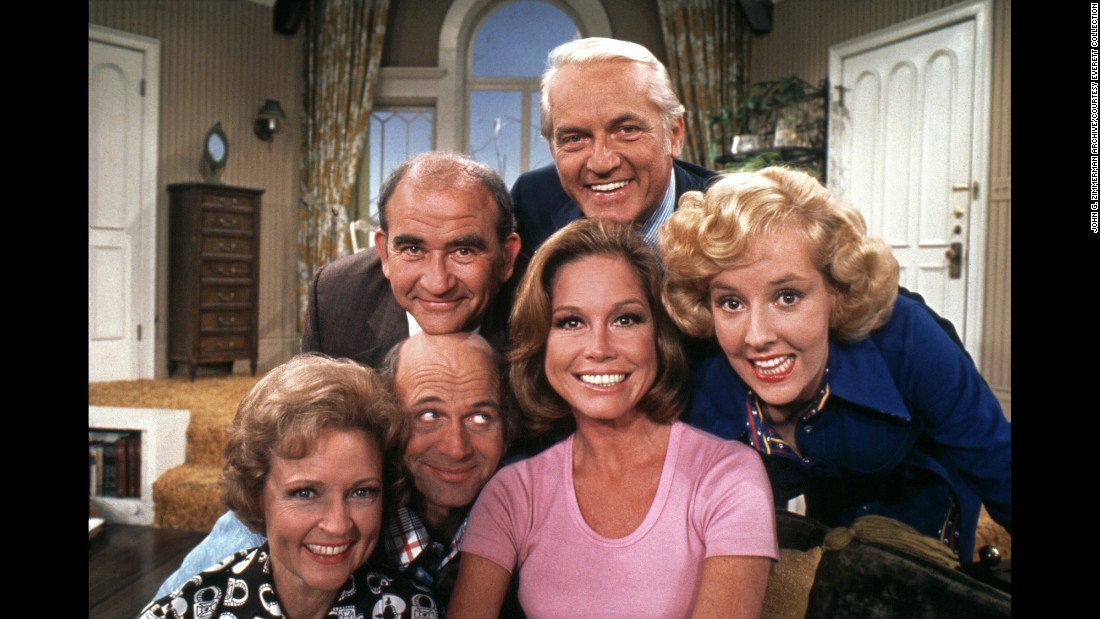 Yet another important sitcom that played a significant role in changing the TV landscape. Actress Mary Tyler Moore represented the modern woman, making inroads in what was perceived to be a man’s world. She plays Mary Richards, who has moved to Minneapolis to become a secretary at TV station WJM, but ends up getting offered the position of Associate Producer of the Six O’Clock News. Today it’s hard to imagine how significant this was, but by exploring her workplace and home life, it provided illumination through laughter and featured some of the best comedy writing television has ever seen. And get a load of these characters/actors besides MTM herself: Lou Grant (Edward Asner), Mary’s boss; Murray Slaughter (Gavin MacLeod before he boarded The Love Boat), head writer of the news; anchorman Ted Baxter (the oh-so-memorable Ted Knight); Rhoda Morgenstern (Valerie Harper), Mary’s best friend; Phyllis Lindstrom (Cloris Leachman), Mary’s not-quite-as-close friend and neighbor; Georgette Franklin (Georgia Engel), Ted’s girlfriend; Sue Ann Nivens (Betty White, playing as opposite a role as you can imagine from her part as Rose on Golden Girls). Seriously, that’s simply amazing.

The Mary Tyler Moore Show, which ran from 1970-77, won 29 Emmy Awards and three Golden Globes. It, too, spawned a number of spin-off series: Rhoda (1974-78), Phyllis (1975-77) and Lou Grant (1978-82), the last a one-hour drama. Amazingly, it was Moore’s decision to end the series rather than the network’s. Also, it was only the second sitcom to have an actual ending (the station gets sold and everyone but Ted gets fired), The Odd Couple being the first. 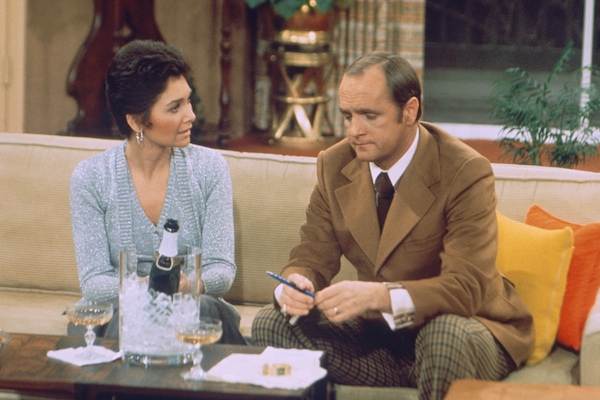 The low-key humor of Bob Newhart was the perfect companion piece to The Mary Tyler Moore Show. Newhart is Chicago psychologist Robert Hartley, Suzanne Pleshette is wife Emily, Bill Daily — hey, it’s Major Healey from I Dream of Jeannie! — is airline pilot Howard Borden; Peter Bonerz is orthodontist Jerry Robinson, who has a practice on the same floor as Hartley; and Marcia Wallace is their shared receptionist, Carol Kester. And then there are those oh-so-wonderful patients of the good doctor, who are so dysfunctional that, especially butting up against Newhart’s personality, it was hysterical. It was the actor’s job to play straight man to pretty much everyone else, and it worked big time.

The Bob Newhart Show ran from 1972-78, and, like MTM, the actor decided to end the show while it was still a critical and audience darling. Also like that show, there was an ending that saw Hartley stepping down from being a working psychologist to become a teacher at a college in Oregon. To show you the enduring power of the show, he went on to star in the sitcom Newhart, which spanned from 1982 to 1990 and saw he and his new wife (Mary Fran) operating a Vermont inn. In the final scene of the last episode of that show, he woke up in bed from a nightmare and turned to his wife — Suzanne Pleshette as Emily — the new show apparently having been nothing but a dream. How brilliant is that? 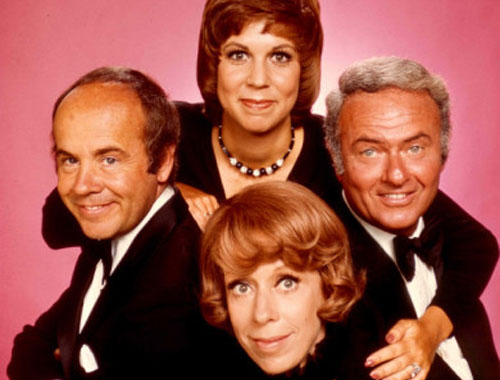 What a way to finish up those Saturday nights! This variety show — consisting of music and comedy sketches — is the one that all others were measured by at the time. It showcased the humor of Carol Burnett, whose companions included, in the beginning, Harvey Korman, Vicki Lawrence and Lyle Waggoner. In the 1975 season, Tim Conway became a regular and there was nothing better than watching Burnett, Korman and Conway in skits trying to crack each other up, a skill that Conway in particular excelled at (to the point where they would have to stop mid-sketch, unable to continue due to laughter). The audience loved their movie parodies, Burnett’s question and answer session with the studio audience, and even the tugging of her earlobe at the end of each episode which signaled to her grandmother that everything was okay and that she was thinking of her.

Each week Burnett would end the show with a song whose lyrics were, “I’m so glad we had this time together, Just to have a laugh or sing a song; Seems we just get started and before you know it, Comes the time we have to say, ‘So long.’”

The same could be said of those Saturday nights on CBS in 1973.

‘The Munsters’ Are Coming Back to TV, and We Can’t Wait