You may think that the Yellow Brick Road stops at the classic 1939 film The Wizard of Oz, but the truth is that that trip into the fantasy world of author L. Frank Baum was only the beginning. Actually, that isn’t entirely true either. About 30 years before Judy Garland first donned her ruby slippers, there was a radio play, followed by five short silent films as well as a 1933 animated short.

For most people, however, their first real exposure to Oz came through The Wizard of Oz, as Dorothy, desiring to return to Kansas, meets up with the Scarecrow, the Tin Man, and the Cowardly Lion — respectively looking for brains, a heart and courage — as they make their way to the Emerald City and a fantasy adventure that has thrilled generations of viewers. It’s also inspired numerous variations over the years, most recently in the form of the NBC television series Emerald City. 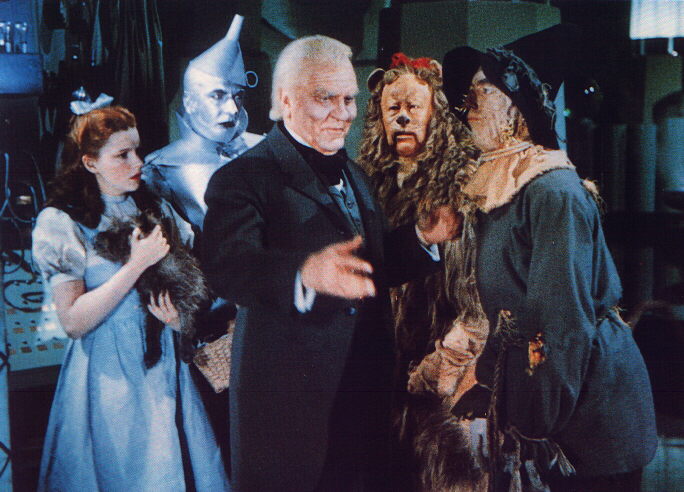 It’s still the best, losing none of its magic over the past 78 years. C’mon, we’re talking Judy Garland as Dorothy, Margaret Hamilton as the Wicked Witch of the West, Ray Bolger, Jack Haley and Bert Lahr as the Scarecrow, Tin Man and Lion, and those terrifying winged monkeys, damn it! And then there’s all that color, those classic songs, the ruby slippers, grumpy talking trees, the munchkins, the Lollipop Guild and Toto, too….the list goes on and on! 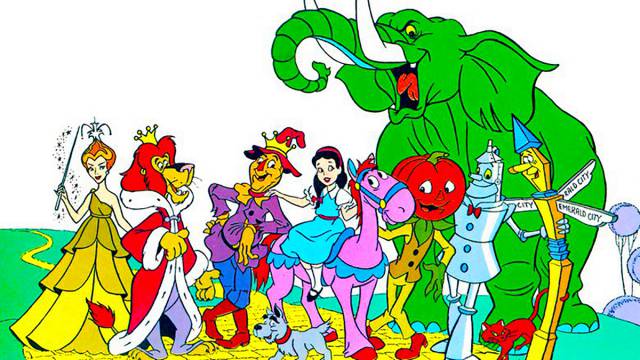 You’ll be hard-pressed to find this one, but it’s considered a sort of sequel to The Wizard of Oz. This musical animated adventure finds Dorothy and Toto back in Oz thanks to another tornado (you just never know when those things are going to pop up). There, teaming up with Pumpkinhead, they attempt to help the Scarecrow defend Emerald City from a green elephant attack orchestrated by the evil Mombi. Begun in 1962, this Filmation production wasn’t completed until 1971 due to financial challenges. The film — starring Judy Garland’s daughter, Liza Minnelli, as the voice of Dorothy; Danny Thomas as the Tin Man, Milton Berle as the Cowardly Lion, Mickey Rooney as the Scarecrow, Paul Lynde as Pumpkinhead and Ethel Merman as Mombi — failed at the box office, though it enjoyed some life on television until 1984, the last time it was broadcast. 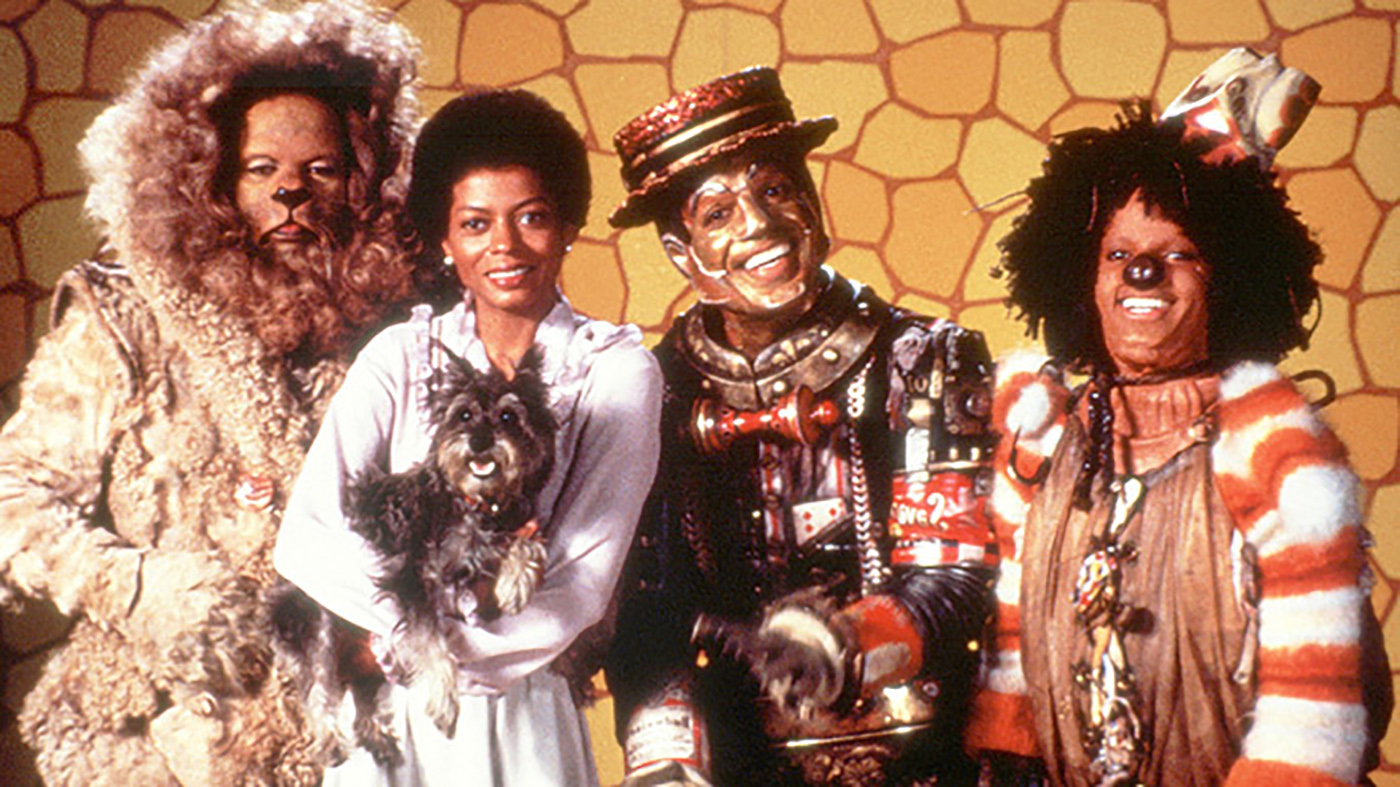 Pretty early on it was obvious that someone had taken a wrong turn on that road of yellow bricks. Based in part on the 1975 Broadway musical of the same name, this was an all African-American take on The Wizard of Oz. Dorothy (this time a 24-year-old New York school teacher played by the a then 33-year-old Diana Ross) and her dog get stuck in a massive snowstorm and suddenly find themselves in the land of Oz, which seems more like a fantasy version of New York City. Despite a cast that includes Michael Jackson as the Scarecrow, Nipsey Russell as the Tin Man, Richard Pryor as The Wiz, Lena Horne as Glinda the Good Witch of the South and Mabel King as Evilene, the Wicked Witch of the West, this one did not go over well on release, but has certainly gained a following over the years. The musical did, however, serve as the basis for a 2015 TV version presented live. 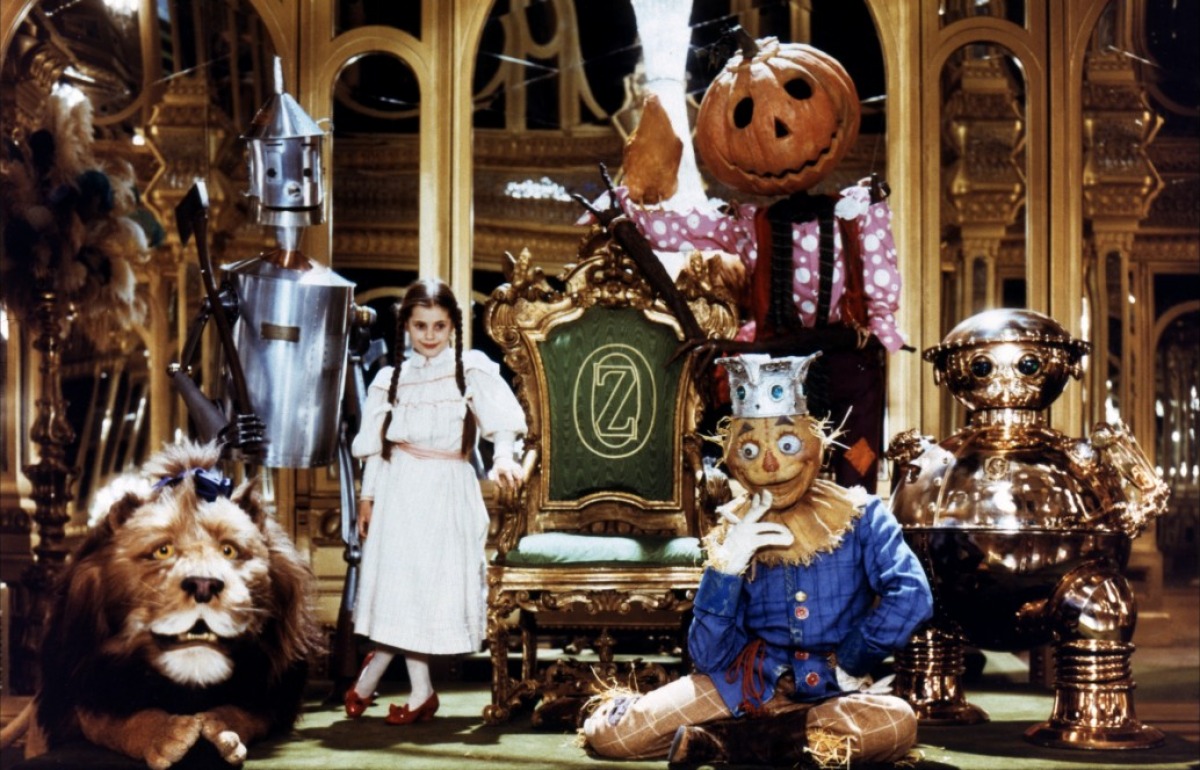 Despite the two previous takes on Oz, this Disney production,which was the first one to try and match the original in terms of ambition, was considered a bit of movie blasphemy back in the day. Walter Murch, sound designer for early films of George Lucas, served as director, and brought forth a dark and depressing version of Oz. It’s six months since young Dorothy (Fairuza Balk) returned to Kansas, and, considered delusional, she’s about to undergo electrotherapy (see what we mean? Not too much joy to be found there). At the last moment she’s saved by a young girl and finds herself returned to Oz. Once there, she makes the discovery that the Yellow Brick Road is in ruins and her friends have been turned to stone. Teaming up with Billina, a talking chicken; the mechanical Tik-Tok and Jack Pumpkinhead, they must stop the evil Nome King (Nicol Williamson) and free the people of Emerald City. Ain’t nobody singing in this one. 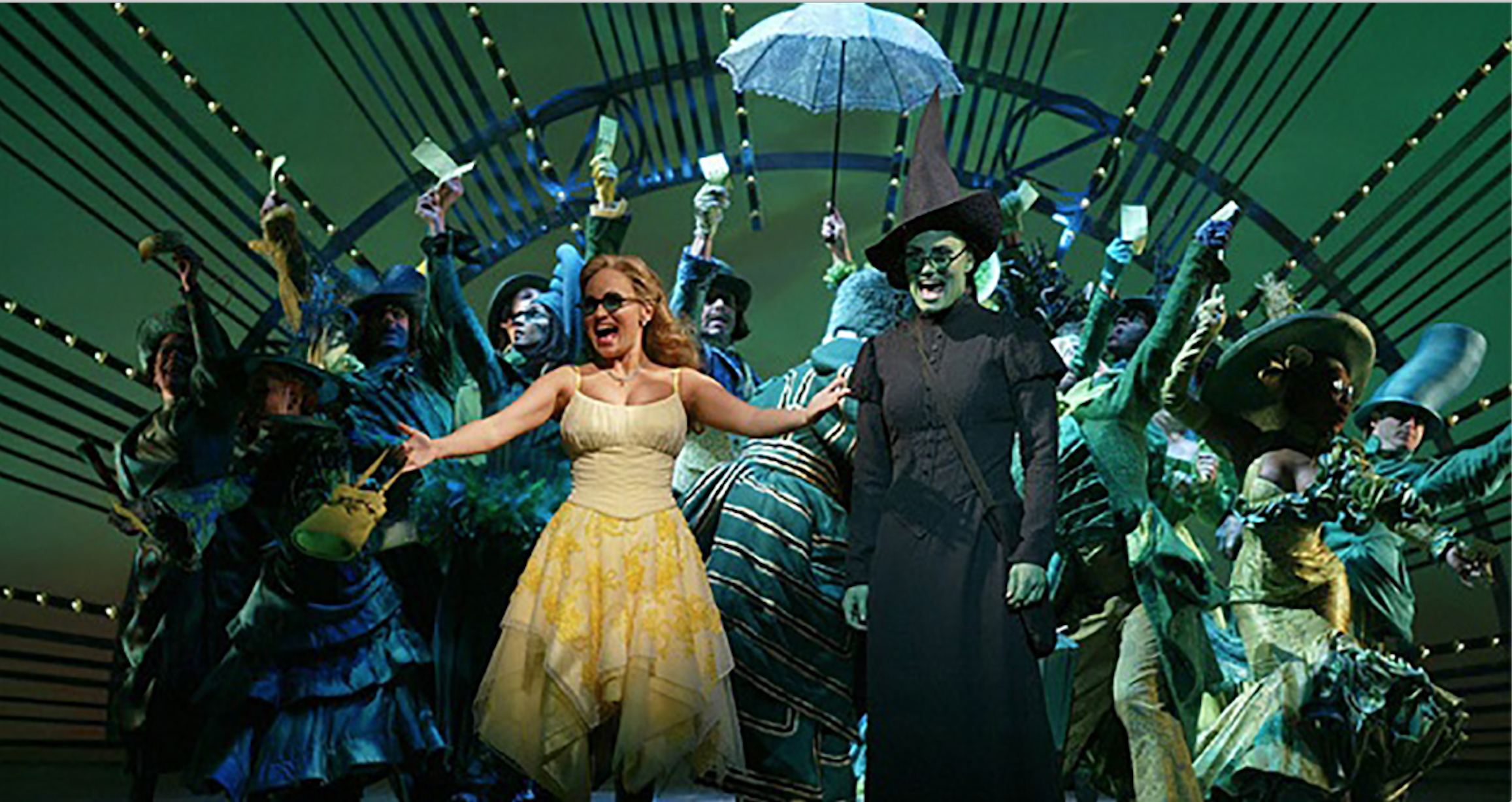 This stage musical, based on the novel by Gregory Maguire, made its debut on Broadway, but since then has become a global sensation, thrilling audiences everywhere with its combination of music, humor and pathos. The focus is on Elphaba, the Wicked Witch of the West (first played by Idina Menzel on Broadway), and Glinda, the Good Witch Of The North (originally Kristen Chenoweth on Broadway), and the take is different from what we’ve seen before. The suggestion in Wicked is that Elphaba is misunderstood, a victim of racism (she is, after all, green!) and the politics of Oz. In production for the past fourteen years, it doesn’t seem to be going anywhere soon — though eventually Universal will produce a movie version. 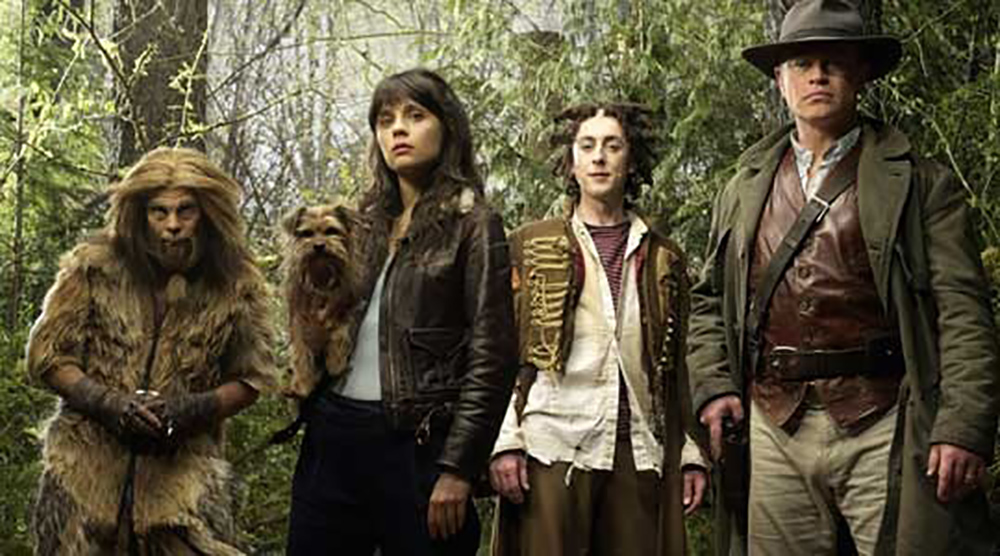 Syfy, when it was still called Sci-Fi, produced this three-night miniseries that certainly offered a unique take on the concept. Zoey Deschanel is DG (a descendent of Dorothy Gale, it turns out), who finds herself in the magical world of “The O.Z.,” which is ruled by a cruel sorceress named Azkadellia. Of course it wouldn’t be Oz if Dorothy/DG didn’t team up with a variety of colorful characters to accomplish her goal, among them Alan Cumming as Glitch, this world’s take on the Scarecrow as half his brain was taken by Azkadellia; Raoul Trujillo as Raw, a telepathic human/lion hybrid; and Neal McDonough as Wyatt Cain, a former member of law enforcement in The O.Z. known as a Tin Man. All of them are off to see…The Mystic Man, as played by Richard Dreyfuss. The hope was that the mini-series would go weekly. It didn’t. 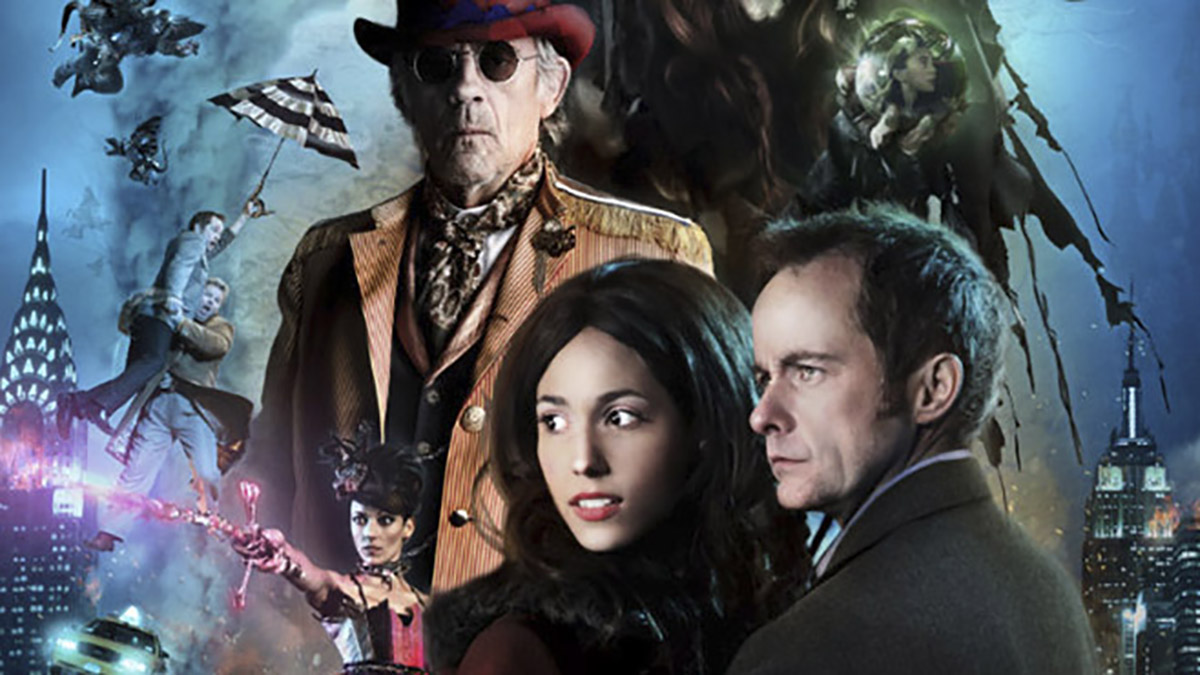 In 2011 this one aired as a TV miniseries, but a year later a shortened version was released in theaters. Dorothy Gale (Paulie Rojas) is an adult and successful children’s book author living in New York City (having moved there from Kansas). When the Wicked Witch of the West appears in the middle of Times Square, Dorothy comes to the realization that the basis of her stories are from memories she’s repressed since childhood. To combat the Wicked Witch, Dorothy turns to her friends, who turn out to be this world’s incarnation of the characters she originally met in Oz (see, it’s much cheaper to flip that particular coin — no expensive makeups). The cast includes Christopher Lloyd as the Wizard, Mia Sara as the witch Princess Langwidere, and Lance Henriksen as Uncle Henry. Written and directed by Leigh Scott for a budget of $5 million. 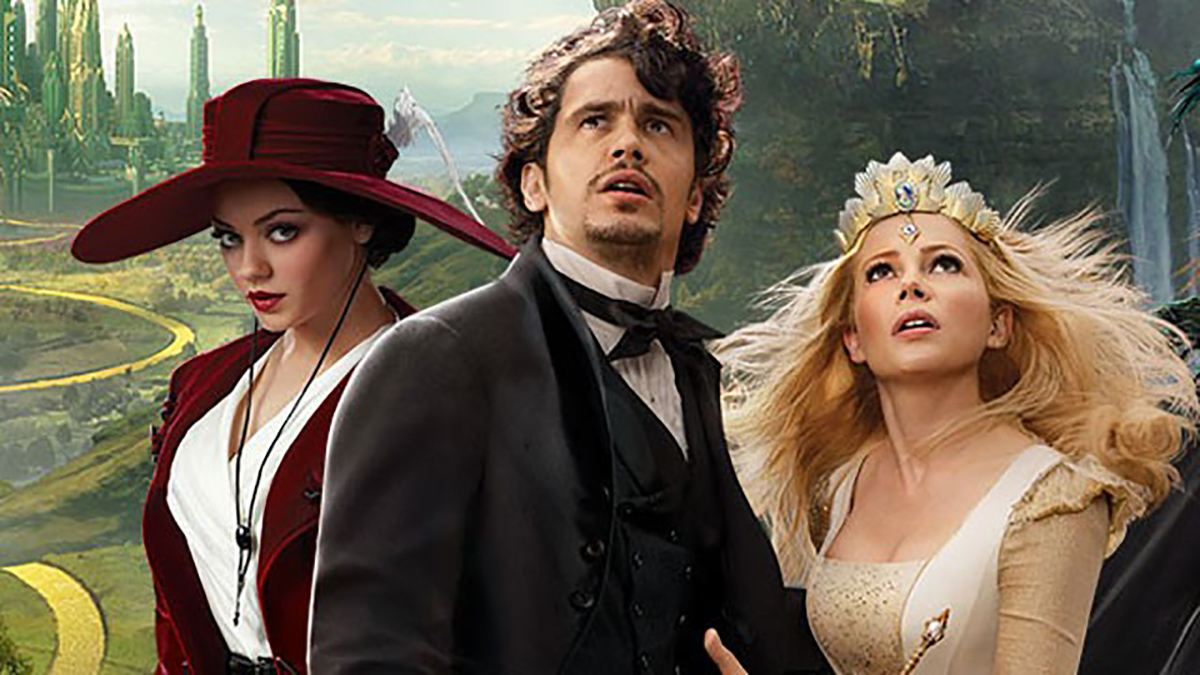 Without doubt the most ambitious of the Oz films since the original. Directed by Sam Raimi, it’s unofficially a prequel to the 1939 film focused on James Franco’s Oscar “Oz” Diggs, who, in 1905, is working as a magician in a traveling circus and who, like pretty much everyone else in these films, finds himself in Oz via tornado. There he goes from fraud to hero as he agrees, for a price, to help the people of Emerald City, not believing for a second, that there are really witches. But the truth soon becomes apparent, and he finds himself in the middle of a magical power struggle. Mila Kunis is Theodora, who will ultimately become the Wicked Witch of the West; Rachel Weisz is Evanora, the Wicked Witch of the East; Michelle Williams is Glinda, the Good Witch of the North (the actress also plays an old girlfriend of Oscar’s who will eventually give birth to Dorothy). A sequel was expected, but while the film turned a profit, it was just enough for Disney to feel it had dodged a fiscal winged monkey, leaving the studio with no intent to return to Oz. At least not yet. 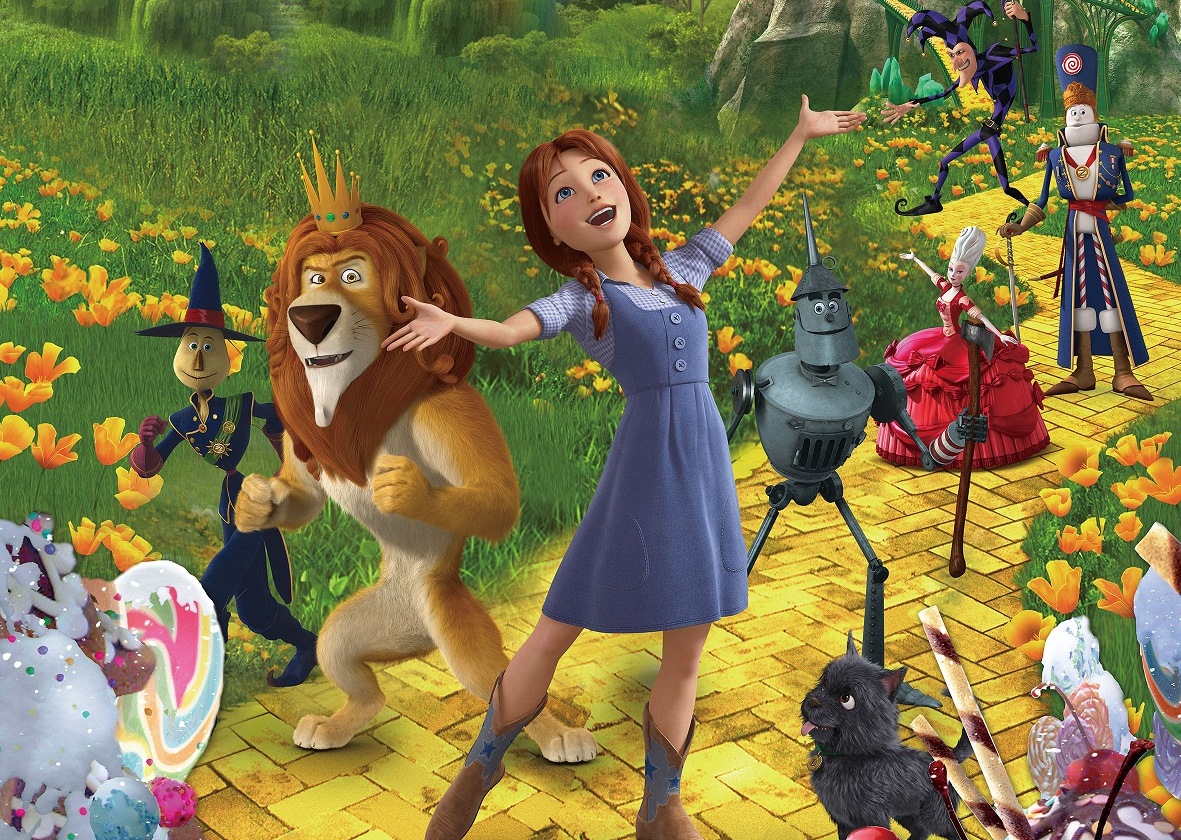 Tornado in Kansas. Dorothy back over the rainbow. Scarecrow, Tin Man and Lion. Songs (by Bryan Adams). An attempt to free and restore Emerald City. The pieces of what seems to be an Oz formula are all there, with the addition of the villainous Jester, several new characters and the fact that this was produced in CG animation. Voice talent includes Lea Michele, Dan Aykroyd, Jim Belushi, Kelsey Grammer, Martin Short, Oliver Platt, Patrick Stewart and Bernadette Peters. Despite all of that star power, and the fact that the script was based on an Oz novel by L. Frank Baum’s great-grandson Robert Stanton Baum, the film grossed $18 million globally on a budget of $70 million. No rubies in those slippers. 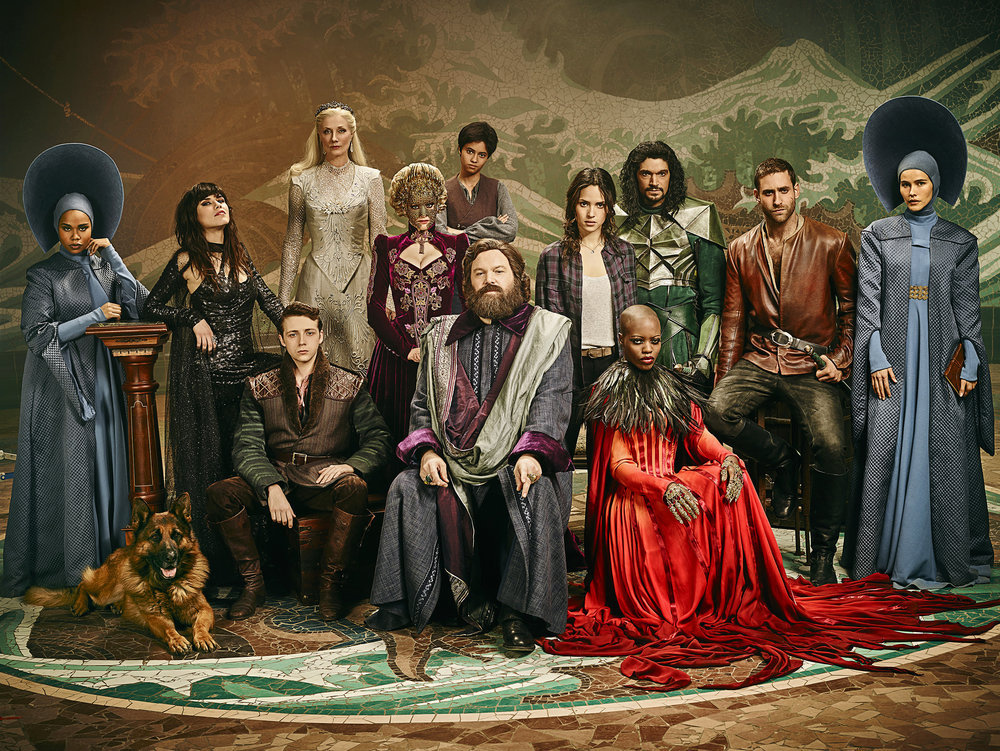 This television series, consisting of a 10 episodes, was approached as Game of Thrones meets The Wizard of Oz. The obvious question is who thought that was a good combination? In this take, based on a variety of the Baum novels, Dorothy Gale (Adria Arjona) is a twenty-year-old who’s on a personal quest to find her biological mother. That search ultimately results in her and a stolen K9 police dog driving (in a stolen police car) right into a tornado, the results of which transports both of them to what is revealed to be Oz. And it’s a realm ruled by fear of the Wizard (Vincent D’Onofrio), and filled with variations of the characters fans are used to as well as many that they’ve likely never encountered before (unless they’ve read Baum). Look for competing kingdoms, lethal warriors and dark magic engaged in a bloody battle for supremacy. Our Dorothy would hate this place.

18 Crazy, Creepy Things You Never Knew About ‘The Wizard of Oz’

There’s a Real-Life Land of Oz in the U.S. and You Can Tour It