For the past four years, a young woman from Knoxville, Tennessee, has been receiving special gifts from her father, Michael Sellers. The strange part? He passed away five years ago.

Bailey Sellers received a bouquet of flowers and a heartfelt card on her 21st birthday from her father, who passed away in 2013 after a battle with cancer. Sellers tweeted her father’s final gift to her on Twitter, writing, “My dad passed away when I was 16 from cancer, and before he died, he pre-paid for flowers so I could receive them every year on my birthday. Well, this is my 21st birthday flowers, and the last. Miss you so much, daddy.”

My dad passed away when I was 16 from cancer and before he died he pre payed flowers so i could receive them every year on my birthday. Well this is my 21st birthday flowers and the last. Miss you so much daddy. 💜 pic.twitter.com/vSafKyB2uO

Although she’s clearly deeply touched by the gesture, Sellers also said that this year’s gift is the toughest one yet — and after reading the card, we can see why.

“Ever since my dad passed away, I’ve hated my birthday and I dread it every year because he always made it so special,” Sellers told The NY Post. “I was especially dreading my 21st because I knew it would be the last year.” 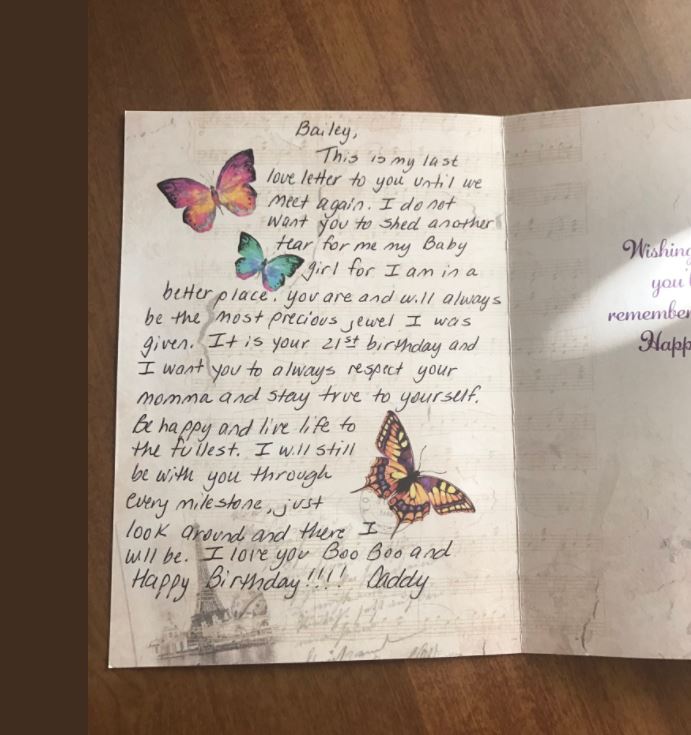 “This is my last love letter to you until we meet again,” her father wrote. “I do not want you to shed another tear for me, my baby girl, for I am in a better place.”

Sellers’ father was diagnosed with stage four pancreatic cancer two weeks after Christmas in 2012. Though doctors said he would only make it two more weeks, Michael Sellers gave Bailey, his wife, and Bailey’s three older siblings six more meaningful months before he died.

Sellers claims she received more emotional reactions to her annual birthday post this year than ever before, with more than 330,000 retweets, 1.4 million “likes,” and 13,000 comments wishing her a happy birthday.

“I honestly think that was my dad,” she said. “He was trying to make my birthday spectacular.”

12 Heartwarming Photos of Kids Reuniting With Their Military Parents