A few weeks ago, an abandoned dog made headlines in Liberty County, Texas for sticking it out in the cold weather to stay by his companion who was sadly struck by a vehicle.

Naturally quite concerned, Texas residents took to Facebook to see if anyone knew the pup or would be able to help. Facebook user Aimee Alisabeth Carr posted a photo of the abandoned dog with a caption that read, “He has been sitting with his friend’s body for three days now! I have fed him, and my aunt [Lynda Woods] has fed him multiple times because he is hungry! Does anyone know of any rescue groups that could help?”

As days passed, more and more people began to notice this lonely dog — many of whom tried to coax him away from his friend. Others left food and water, but the dog still wouldn’t budge.

Now, the loyal pooch is in the news again, but for a much happier reason. On Wednesday, three determined women — sisters Chloe and Sommer Miles and their friend, Madison Waskow — refused to take this pup’s “no” for an answer. The three attempted to rescue the poor dog on Wednesday, only to end up empty-handed. But they decided to come back the next day to try again.

“He would let us get near him but we couldn’t catch him. He just wouldn’t leave his friend’s side. He just stayed there. He would sniff at him like he was trying to say, ‘Get up,'” Sommer told local Texas newspaper the Chron.

“Later in the day we thought we would try one more time,” Sommer continued. “We walked up this time and he was acting like, ‘Okay, this time I am going to go with them.’ We sat down on the ground and he got close enough to Chloe where she could grab his paw. Then Madison just walked up and picked him up and carried him to the Jeep, and we took him home. He still didn’t want to leave his friend though.”

Thanks to these women, the pooch is now living with Sommer and her family. 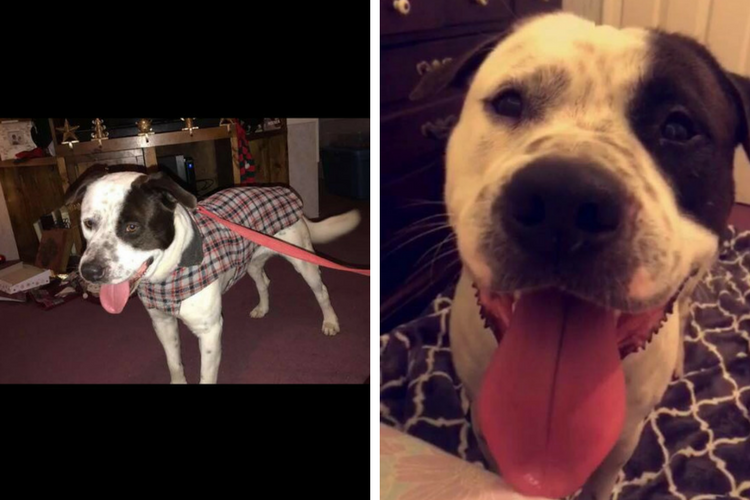 “We are calling him Toby,” Sommer said. “He seems to have adjusted well to his new environment and is getting plenty of food and love.”

We’re so happy Toby has finally found a new family! And if one thing’s for sure, he’s proved that he’s one loyal pup!