If you liked the fictional Titanic story about Jack and Rose, we think you’ll like the real Titanic story about Ida and Isidor Straus even more. If those names sound unfamiliar to you, think back to the heart-wrenching montage in the 1997 film that showed passengers left behind in the ship saying their final goodbyes to one another as the floodwaters slowly enveloped them (it’s OK if you tear up while recalling those moments!). Remember the elderly couple holding one another and giving each other one last kiss? Well, that fictional scene was based on the real-life Straus couple.

Who were Ida and Isidor Straus? 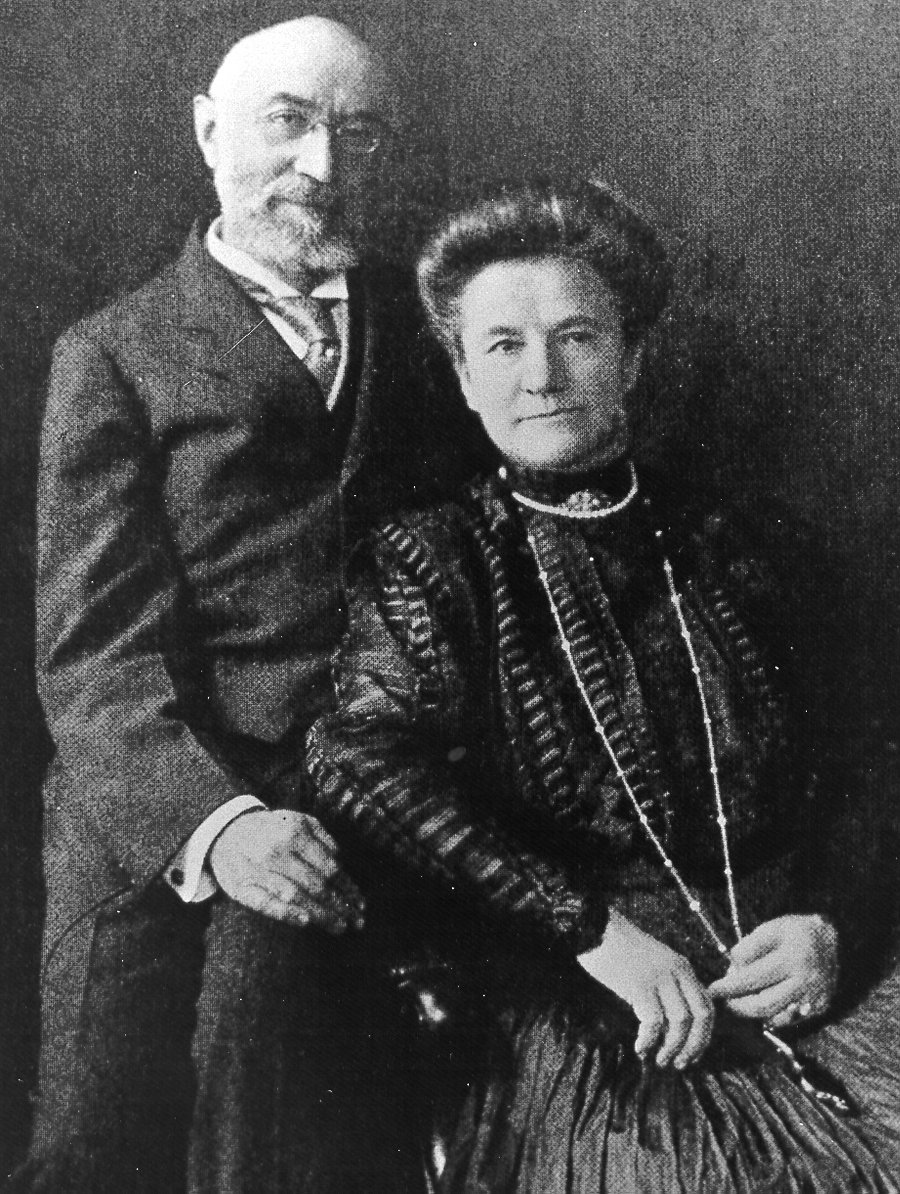 Isidor and Ida Straus were both German immigrants born in the 1840s who later immigrated to the United States with their families. Though Isidor’s family originally settled in Georgia, they moved to New York after the Civil War ended. Isidor married his soulmate Ida Blun in 1871, and the couple went on to have six children. The couple’s oldest daughter, Sara, would later tell her grandson, Paul Kurzman, PhD, about the deep love Isidor and Ida had shared: “They often wrote letters to each other expressing their devotion.”

The couple was also devoted to hard work. Isidor and his brother Nathan started out selling china at R.H. Macy & Co. By 1888, the brothers actually owned the store. Isidor also had a brief career in Congress from 1894 to 1895, but he did not enjoy his work there. Instead of running for re-election, he chose to return to his previous work and to spend more time with his dear Ida. In 1902, Isidor and Nathan opened Macy’s at Herald Square (hey, we’ve heard of that place!). Ida was a hard worker too; along with raising the kids, she also worked with her husband as a philanthropist focusing on health, education, and public service.

Scene from the 1997 Titanic movie, portraying Isidor and Ida Straus.

Isidor and Ida were also quite the travelers; they were traveling abroad in Europe in the winter of 1911 to 1912. It was there that they planned to return to New York for the spring, so they booked first-class tickets on the “unsinkable” ship, which unfortunately — as we all know now — was not. On the fateful night that the ocean liner hit the iceberg, the couple lined up to take their places on the lifeboat. But you might remember the call for “women and children first.”

Sometime thereafter, an officer informed Isidor that he would make an exception for him due to his age and status. But Kurzman recalled as a child hearing that his great-grandfather had said, “I will stay on board until all women and children are in lifeboats.” Meanwhile, Isidor tried to convince his wife to get on the lifeboat, but when it became clear that he wasn’t budging, Ida refused to abandon her husband. Instead, she actually stepped out of the boat and said, “If my husband stays aboard, I stay aboard. Married 40 years, we have lived together for many years. Where you go, I go.” Ida then tossed her fur coat to her maid, Ellen Bird, who did get in the boat — and lived to tell the incredible story to the relatives the couple left behind.

As the couple’s great-great grandson Brett Gladstone would later explain, these final moments have captured the imagination of countless people for more than a century — enough for them to be portrayed in one of the highest-grossing films in history. However, Gladstone points out, “Although the most recent Titanic movie by director Jim Cameron portrays them hugging each other in their bed as the water rose around the bed, eyewitnesses last saw them hugging each other on deck chairs when the waters engulfed them.”

If you’re getting chills — or maybe shedding a tear or two — you’re not the only one! 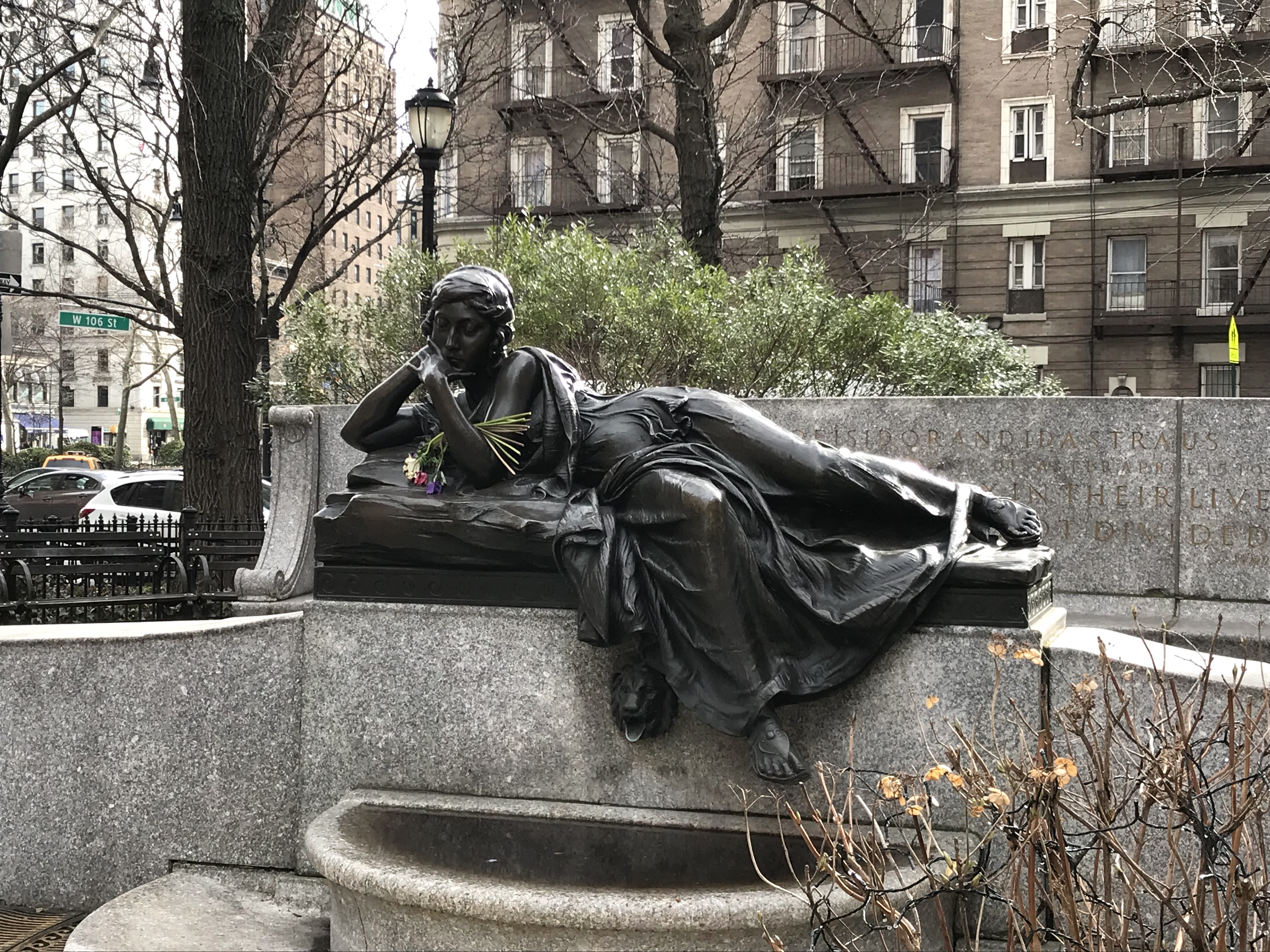 Aside from the blockbuster film, Ida and Isidor Straus have also been remembered in other movies about the ill-fated ship, as well as in multiple TV series, a Broadway musical, poems, songs, books, and articles. There are also three Titanic museums that pay tribute to victims like the Strauses. The Straus Historical Society works tirelessly to research family history, and there are countless events around the world that commemorate the timeless love story.

There is also a monument dedicated to the devoted pair in the namesake Straus Park in New York City, which was first established just three years after they died. Since then, it’s been restored — and today, it’s beautiful as ever. Among the natural greenery of the park is a bronze reclining female figure of Memory and a reflecting pool-turned-flowerbed.

Nearby is a bench with the following inscription:

IN MEMORY OF ISIDOR AND IDA STRAUS

WHO WERE LOST AT SEA IN THE TITANTIC DISASTER APRIL 15, 1912

LOVELY AND PLEASANT WERE THEY IN THEIR LIVES AND IN

THEIR DEATH THEY WERE NOT DIVIDED.

After Two Bestselling Authors Died of Cancer, Their Spouses Found Comfort and Love in Each Other