What do grandparents do? Well, plenty of things. Mainly, a lot of saying “yes” when the parents say “no.” But there’s a lot more to it than that — and frankly, it’s all a heck of a lot of fun. Don’t believe us? Whether you’re a grandparent, just became one, or still waiting for the day to come, you’ll have to admit that these typical “things grandparents do” are as sweet as can be.

What do grandparents do?

One of the best things about being a grandparent is having a fun and loving relationship with your grandchildren. Which means cherishing every macaroni painting they make, sneaking them goodies when their mother isn’t looking, and taking them on little adventures to Stein Mart. But, there’s some things you’ll only do once, or maybe twice, when you become a new grandparent. Here are a few first-time-grandparent quirks we’re sure you can relate to. Do any of these sound familiar?

Whether it’s been a few days, or a few months, you make sure you “like” each and every photo your grandkids post. And they know it too, because once you’re done being click-happy for the afternoon, you hop on the phone to tell their mother all about it.

2. Staring at your grandchild in wonderment for as long as he or she will let you.

Being a grandparent is a pretty amazing experience. And, when the news first hits that you’re going to have a grandbaby, it’s almost unreal.

3. Spending way too much time debating on what you’d like to be called…

3. …Only to wind up being called whatever random word your grandchild invents for you.

Foofa does have a nice ring to it, doesn’t it?

4. Reminding the world that you’re a grandma whenever there’s an appropriate opportunity.

Even though you used to fret over being old enough for your babies to have babies, you’re now in full-on grandma-mode. At the grocery store? “Oh, yes. I’m buying these Jell-O snacks are for my grandchild. I am a grandmother, you know. Which also means I get a discount right?” At the bank? Or at the bank: “Could I just snag one of these lollipops for my granddaughter? She loves lollipops.” Honestly, anytime there is another human around, you’ll drop the hint that you’re a grandparent — and proud of it.

5. Digging out your kid’s baby photos to see how similar they look to the newest addition.

Family visits are your jam. By now, you’ve got a system: Couch, ottoman, photos. Bam, automatic family art gallery right there in the living room. 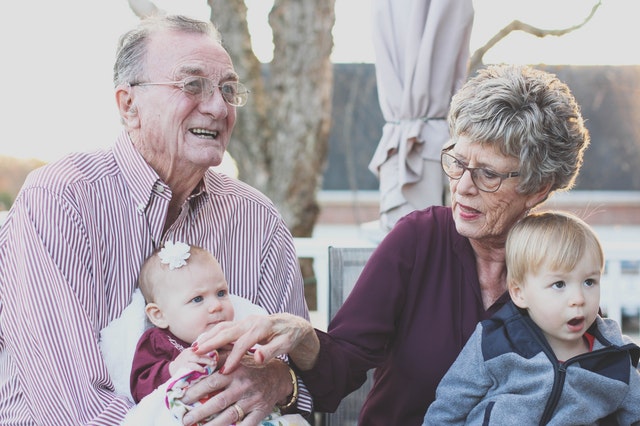 6. Looking for hints that your son or daughter may be trying for another baby.

When you can’t find any clues, you try to think of ways to get the scoop without coming right out and asking, because that would be rude. But subtly poking around never hurt anyone!

7. Asking to speak to the baby on the phone.

Even though you’re well aware your grandbaby is nowhere near gurgling her first word, you still coo ridiculously when you hear so much as a grunt on the other end of the line.

8. Designating a space in your house for your grandchild to call his or her own.

Despite the fact that said child doesn’t take up much room at the moment, you’ve created a children’s wonderland in the old sewing room. Dollhouse, in-door slide, Fisher Price oven — you’ve got the works.

9. Complaining to your son or daughter that you don’t have enough photos of your grandchild.

If you could, you’d hire a photographer to run around and take snapshots of your grandbaby’s every move. And, why wouldn’t you? They won’t be this little forever, you know.

More and More Grandparents Are Moving into These Tiny Houses. And When You Take This Virtual Tour, You May Join Them