Skip to content
Woman's World aims to feature only the best products and services. We update when possible, but deals expire and prices can change. If you buy something via one of our links, we may earn a commission.

Questions? Reach us at shop@womansworld.com

The new Walmart funeral potatoes are being discussed all over the internet, and considering the name of this dish, we’re not surprised. After all, who would want to buy a dish that had the word “funeral” in the title, for heaven’s sake? As it turns out, a whole lot of folks do.

What are funeral potatoes?

“Funeral potatoes” is the best-known name for a cheesy, creamy potato casserole dish that originated with Mormon people in the West, found in their cookbooks dating back to the 20th century. As the name implies, this dish is indeed a popular one at wakes and during times of mourning; however, it’s also a popular recipe for potlucks and other social gatherings as well. They have alternatively been called “party potatoes,” “Mormon potatoes,” or even simply “cheesy potatoes.” In the case of Walmart, the supermarket chain decided to go with the most well-known — and most eyebrow-raising — name.

On Walmart.com, one customer commented, “Why are these called funeral potatoes? Certainly does not inspire me to buy!”

Another customer speculated that it was an April Fools’ prank: “Can you tell me how you came up with the name for these potatoes? Is there any meaning behind it? April Fools’ Day here soon!” 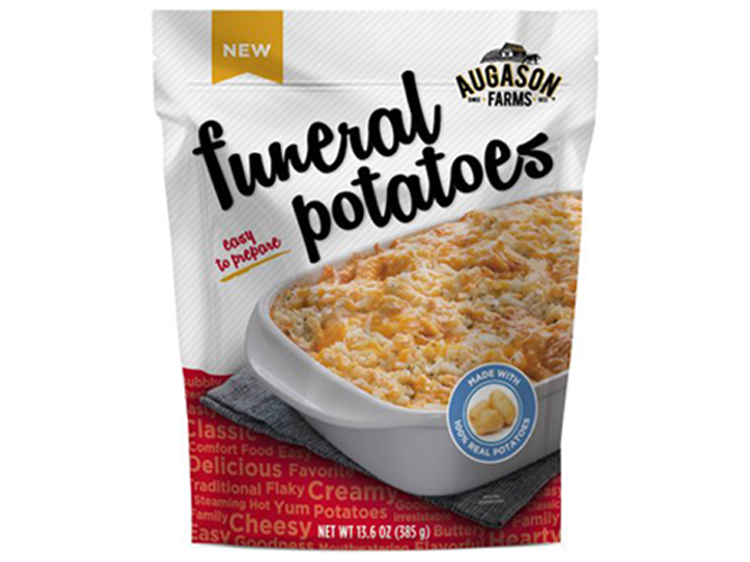 But it’s no joke — and not everyone is shocked by the name, either. Even though funeral potatoes have roots in the West, the meal has quietly grown in popularity in other regions of the United States, and it’s garnered a bit of a cult following in the Midwest and South in particular. Plenty of mainstream chefs and cooks have embraced the dish as well; even Ree Drummond “The Pioneer Woman” has a tasty-sounding funeral potatoes recipe of her own.

As for the Walmart funeral potatoes, they sound pretty easy to make. All you have to do is stir the bagged potato mix with water and pop in the oven. For a more “traditional” flavor, you can also optionally add butter, shredded cheese, and crushed corn flakes. Sounds pretty tasty to us! If you’re interested in trying the Walmart product, you can buy it on the company’s website or one of its stores.

Would you ever serve funeral potatoes — or is the name too much of a turnoff?

In the mood for baked potatoes from scratch instead? Check out this recipe: